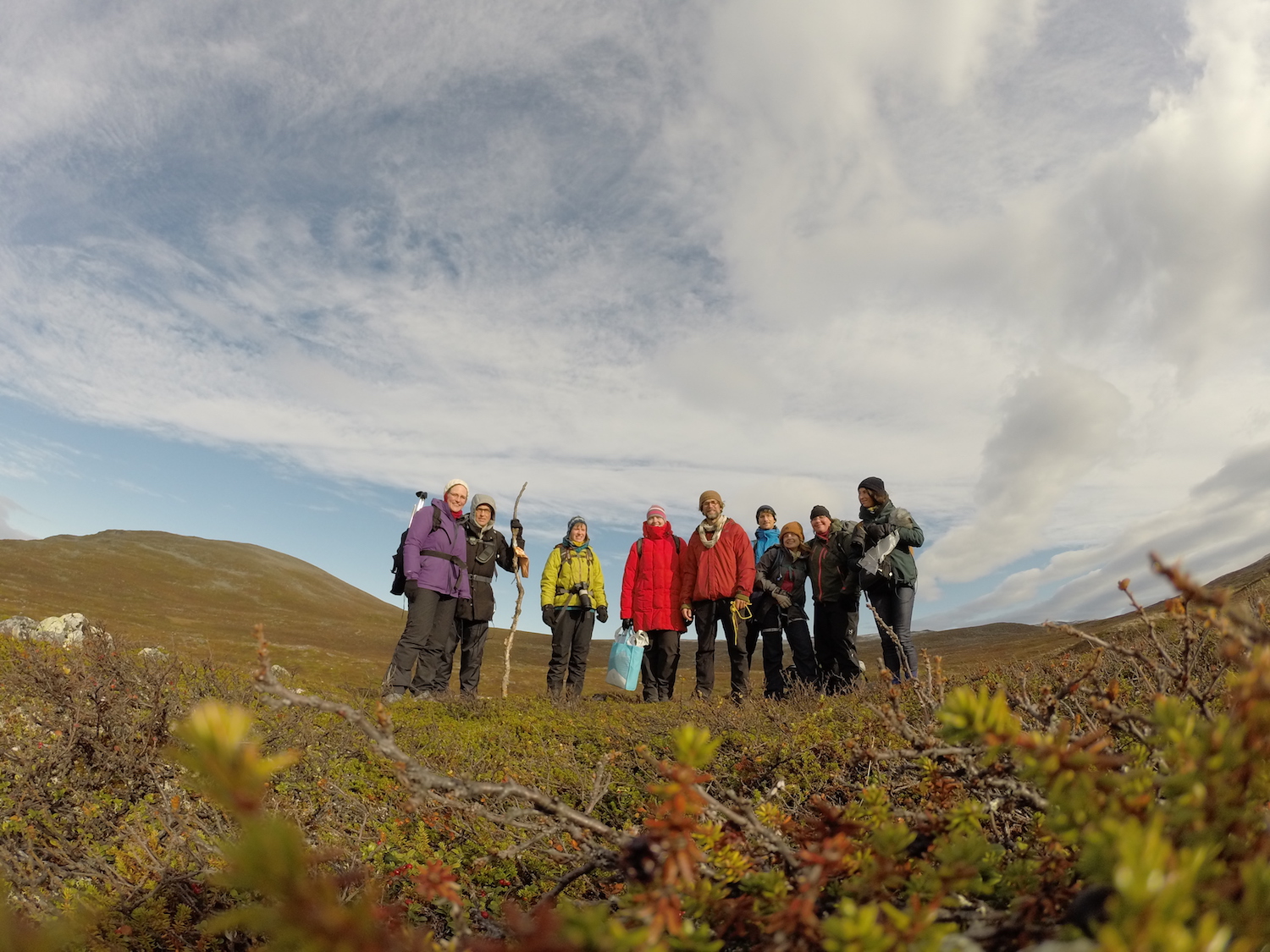 High altitude bioprospecting (HAB) is a long term project searching for microbial life in the atmosphere. Fundamental questions about life surviving or thriving in extreme environments, organisms known as extremophiles, is at the heart of HAB exploration. Through Field_Notes the team of artists and scientists expanded to encompass new people, thoughts and ideas whilst at the Biological Field Station in Kilpisjarvi over the course of a week in September 2019. The area around the Finnish settlement Kilpisjärvi is part of Samiland. It provides a unique and remote environment with relatively low levels of human pollutants: ideal for searching for microbes in the troposphere or near atmosphere.

A different perspective from above the ground (photo by Heidi Pietarinen).

Collecting data (materials, methods and processes) resembles the technique of frottage. However, instead of creating a design by rubbing over an object placed underneath the paper, we had the possibility to express the dialectics between the different artists and researches, of both human and non-human identity, by collecting multisensory stimuli. Participants explored individual pathways and routines, interpreting our shared action of flying the helikite. Part of our thought process therefore was not only to fly a helikite and collect microbial samples, but to further explore visual and sonic figures and rhythms of this action. This resulted in us being interested in other-than-human agency, therefore also having the helikite create traces like paintings, drawings, photographic marks or sound recordings. These are traces of interactions resulting from air-wind moving the helium gas filled structure of a helikite, tethered wire translating the movements happening in air to the ground, through different mediums such as pen and paintbrush, ink, on paper, water on photosensitive paper. Click below to listen to Till Bovermann's audio piece 'some 210 meters of orange wire' while reading! 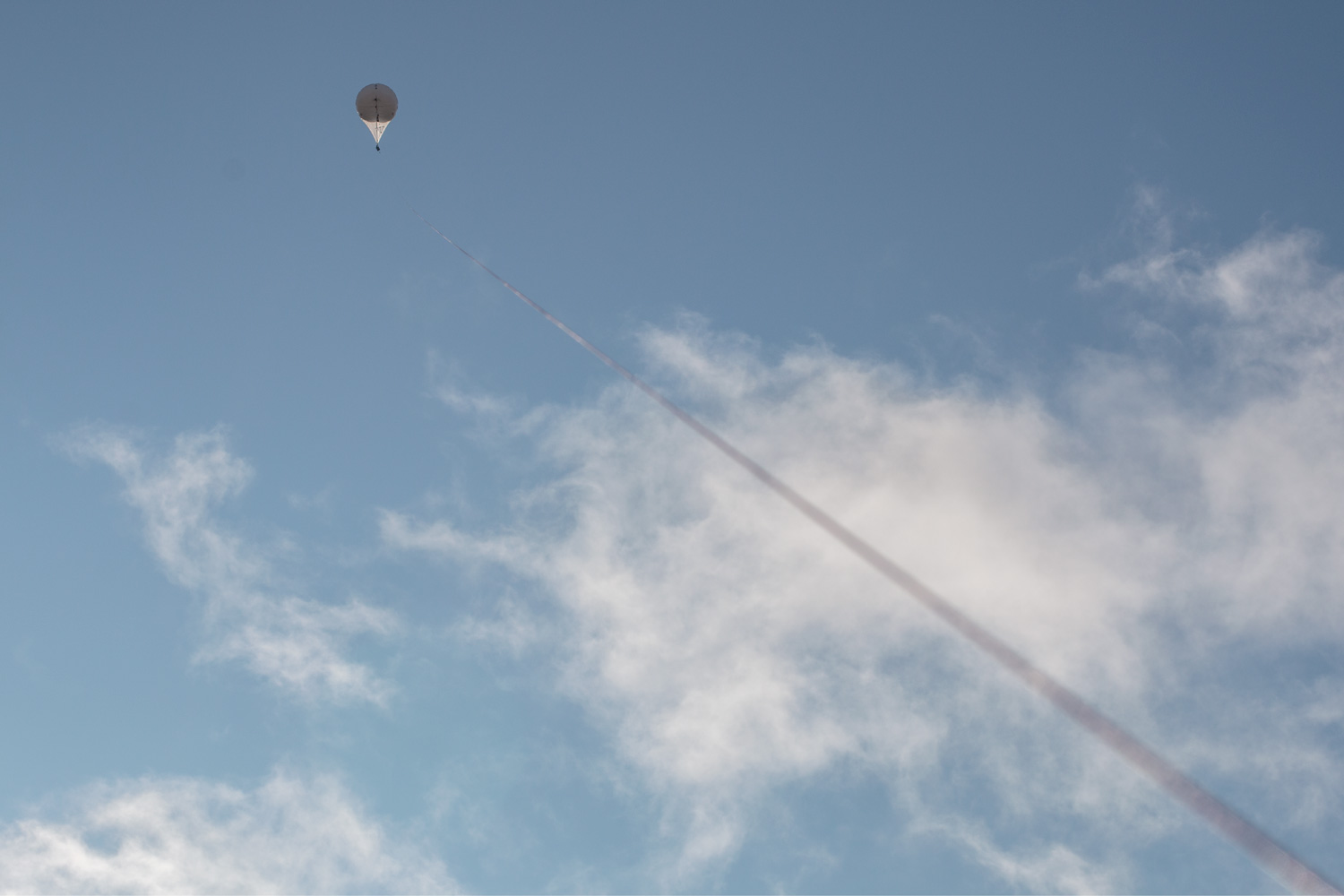 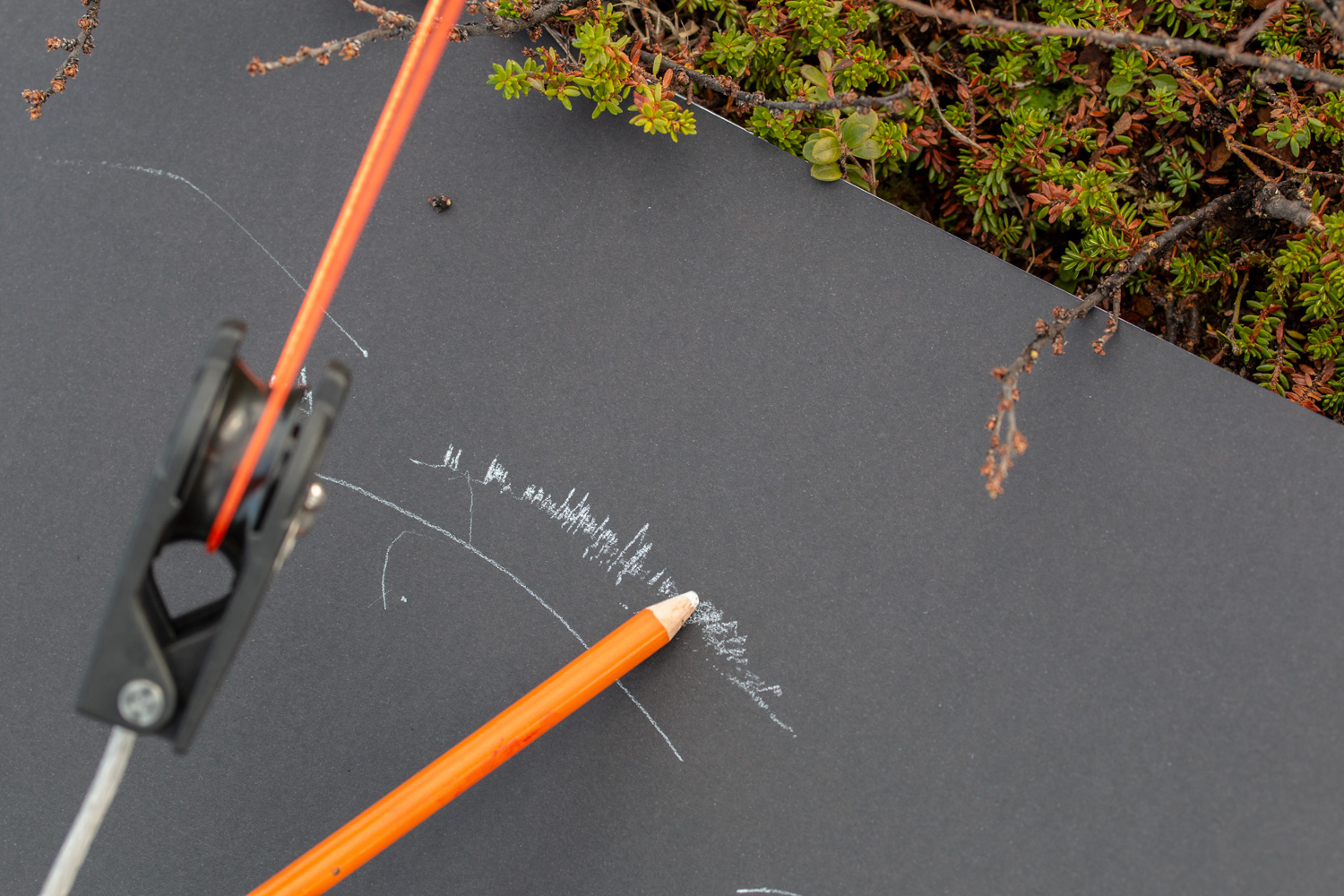 We found our kite-launch site on Saanavankka, the high-plateau between Saana (Sáná) and Jehkas (Jiehkáš). It was chosen partly because of its gentle topography and open skies, partly because it was relatively easy to reach by foot. Beneath us, a rich microhabitat of autumnal tundra form an aromatic carpet of burnt reds and bright greens, rich in berries, lichens and mosses. We secured corners of the tarpaulin and carefully tapped anchoring pins into the earth. 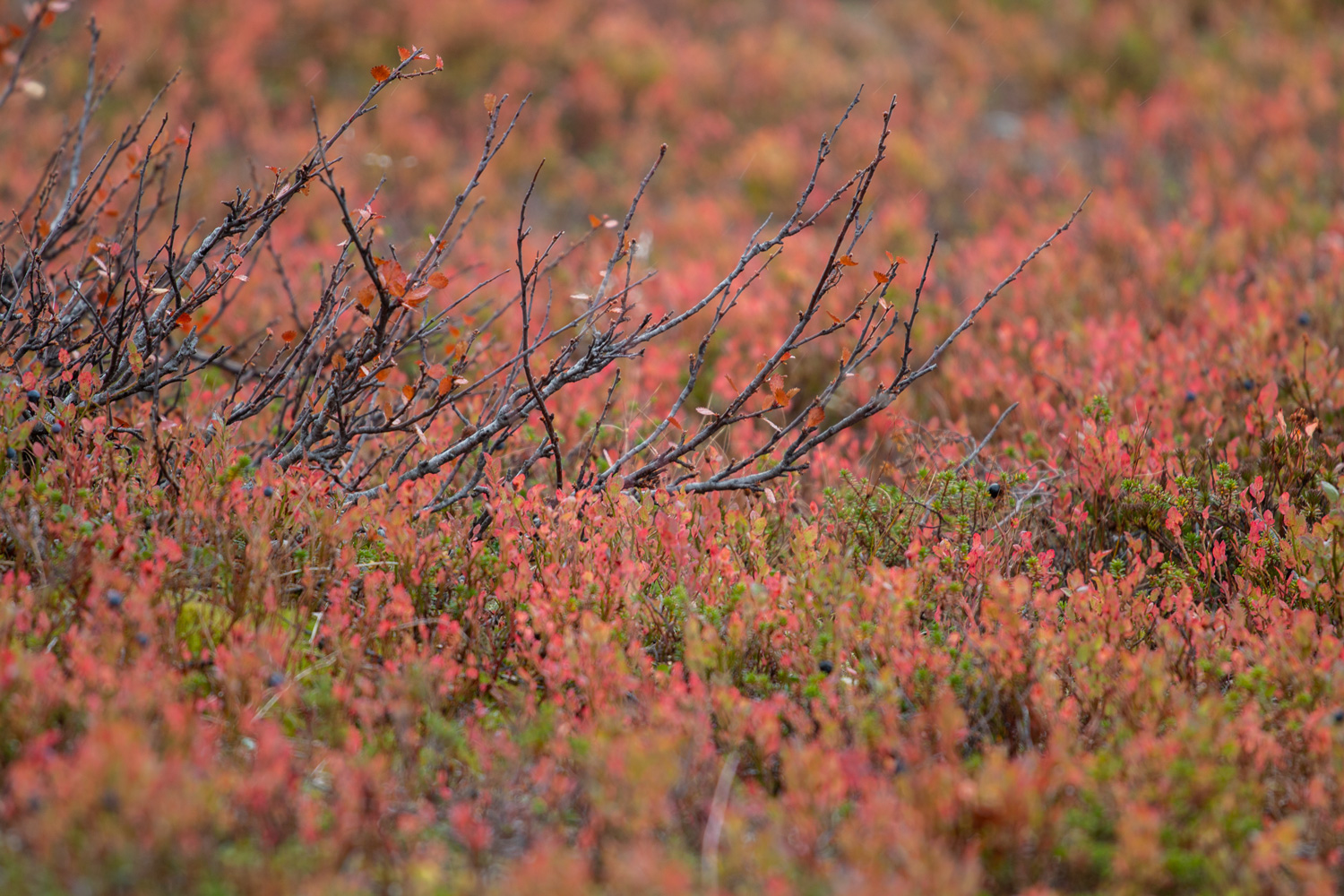 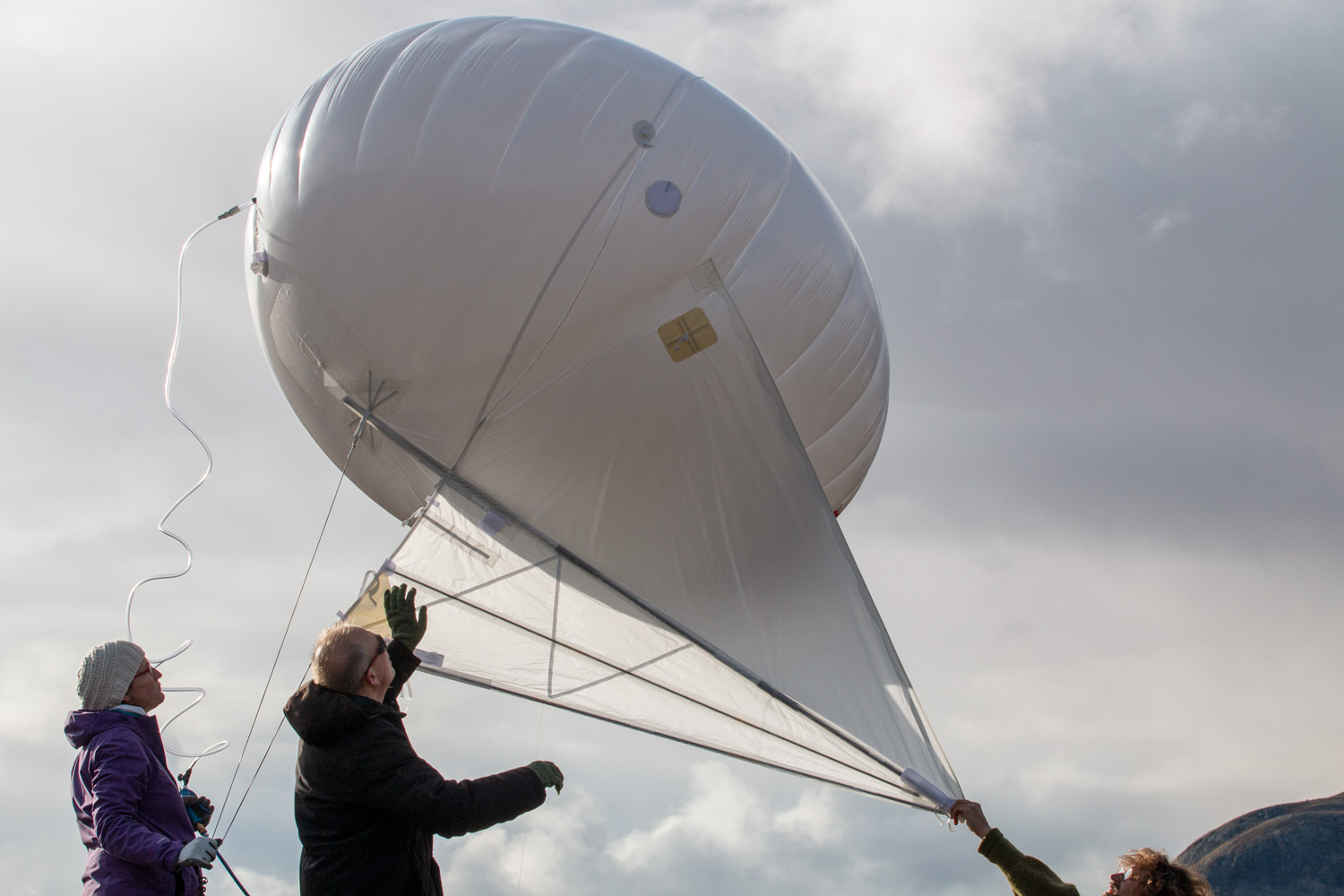 Inflation of the Helikite (photo by Hannah Imlach)

The Helikite took in helium in a rush and unfurled from its crumpled form into a white, biconvex and other-worldly-looking object that rose above the autumnal landscape. It became a nexus for our activity and other groups came to visit each day to wonder at its strangeness. It required our attention; it needed our care: it was swaddled everynight in a cocoon of white sheeting and strapped to the ground to prevent its wandering before our next visit. 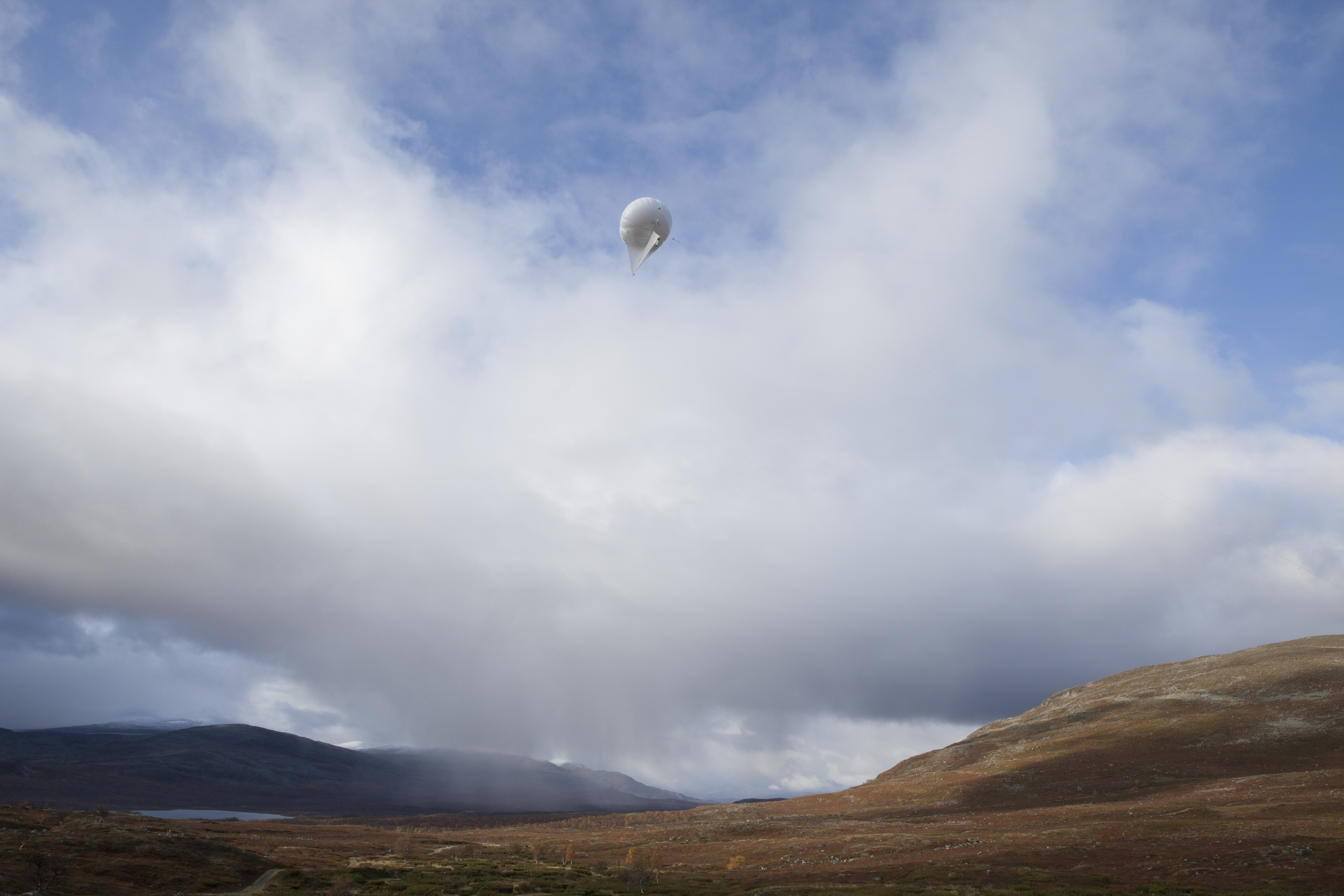 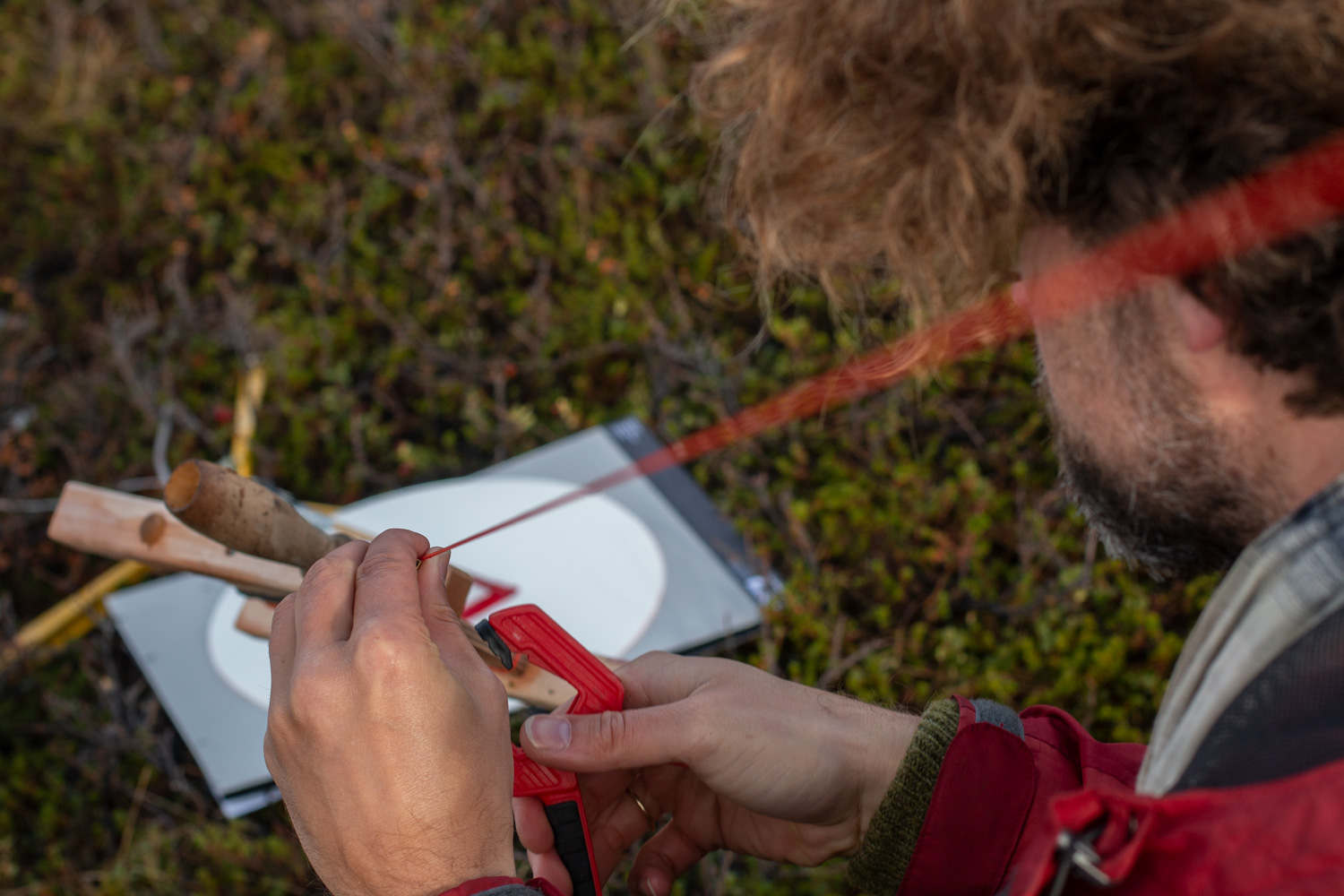 Kite line and contact microphones, canvas for mechanical drawing in the background. (photo by Hannah Imlach)

On launching the helikite, we sought to explore our location from an alternate perspective, gathering data on location, altitude and temperature alongside gestures of wind current. The kite line revealed itself as a connection between “us” and “them”, adding its own strange harmonics.

The Helikite — for being a precisely engineered tool for collecting data — operated surprisingly similarly to a kid’s toy kite. We tied a line to it and unwound the spindle, and up it went, analog-style. Tethered exploration and sampling set this HAB experiment apart from an earlier effort: now we were limited by the length of the tether, the kite’s movement constrained not only by its anchor point but also by the direction of the local wind. In a sense, we were tethered, too: once the launch site was set up, we stuck to that spot.

Just like the Helikite, that tether seemed to take on a personality of its own, speaking in quick bursts, gentle whispers, or occasionally making an emphatic point by means of a pencil or brush  attached to the tether point, creating a mechanical drawing tracking the kite’s movement in the wind, sometimes the movement of pulling it up or down. 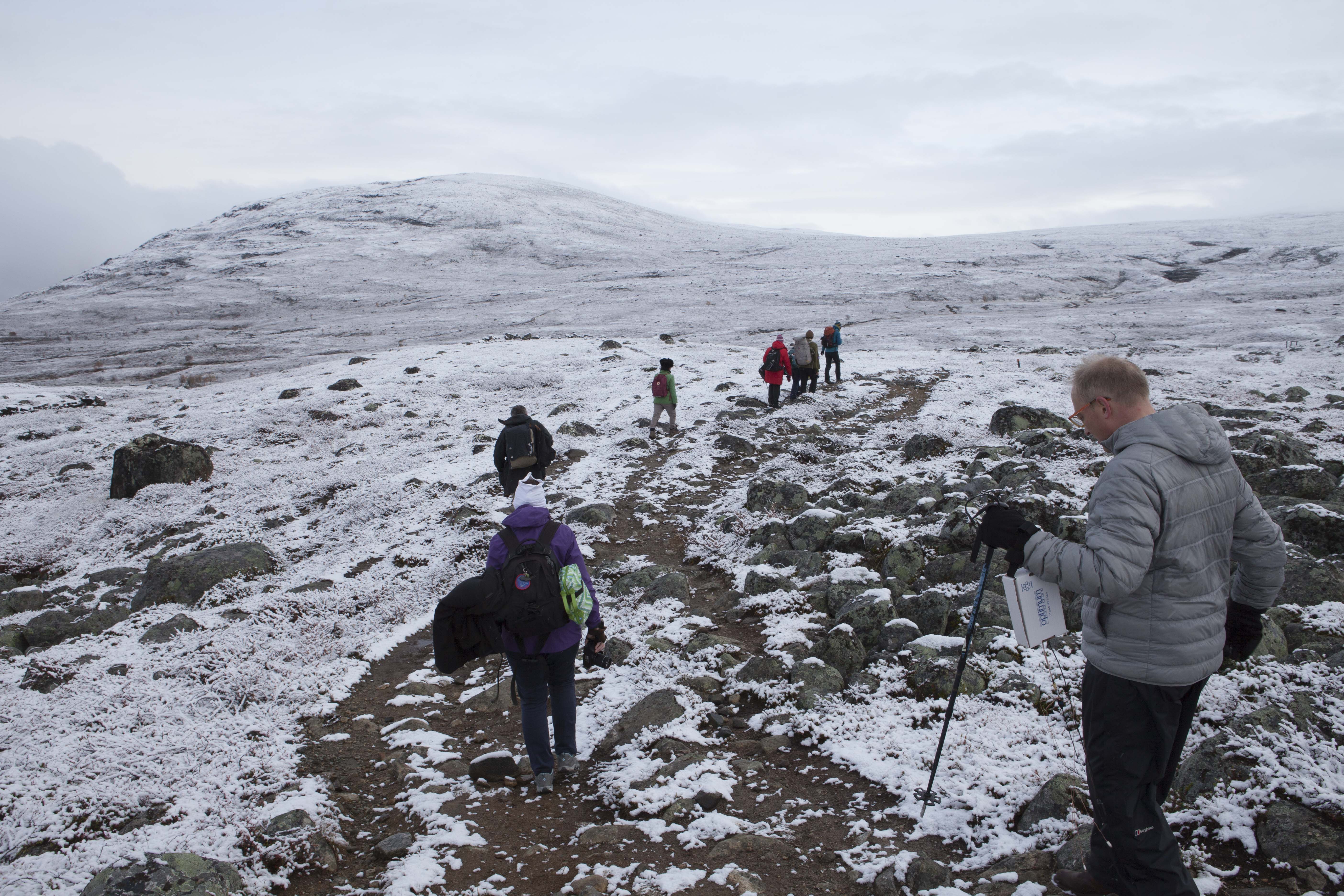 Walking to the launch site (photo by Noora Sandgren)

Such relief and excitement every morning as we arrived at our base site after a warming hike up the mountain! Relief that the package we left the evening before, consisting of plastic, poles and some 210 meters of orange wire, was welcoming us. Untouched and only slightly drained of its noble gas. Untouched by all animals (neither human, nor other) indeed, as the pristine snow that lay across the terrain revealed to us one morning. Perhaps the Helikite was simply too bizarre to investigate? Or just not interesting enough?

KITE-MAKING HISTORIES: HUMAN INTERACTION WITH THE SKIES AND WINDS THROUGH AERIAL OBJECTS

In addition to our daily interactions with the helium-filled Helikite, we reflected on historical kite design, particularly the tetrahedral forms created by Alexander Graham Bell at the beginning of the 20th century. 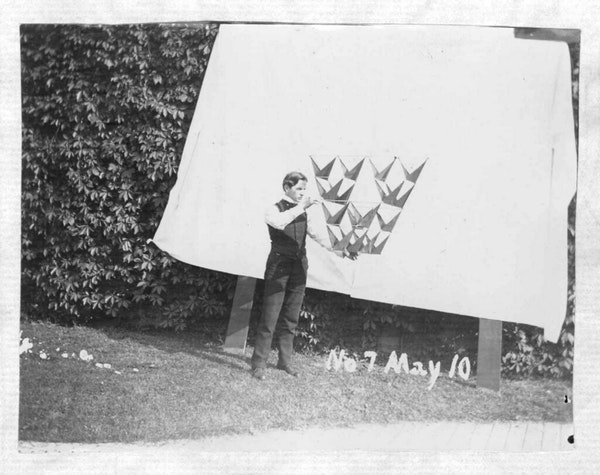 Bell was fascinated not only by flight but also by experimental forms of communication, resulting in his invention of the first practical telephone. The communication made possible by radio connection with the helikite reminded us of this pursuit; to explore space and enable communication and the exchange of ideas despite huge physical distances.

As the HAB team, we organized a workshop evening of collaborative kite-making. We invited participants to construct one pyramid cell which would collectively form our version of a tetrahedral kite. This was an enjoyable way to gather together, work with our hands and explore material properties.

During the last day of the residency, the kite was launched in a very brief and final flight - a joyful act of optimism! 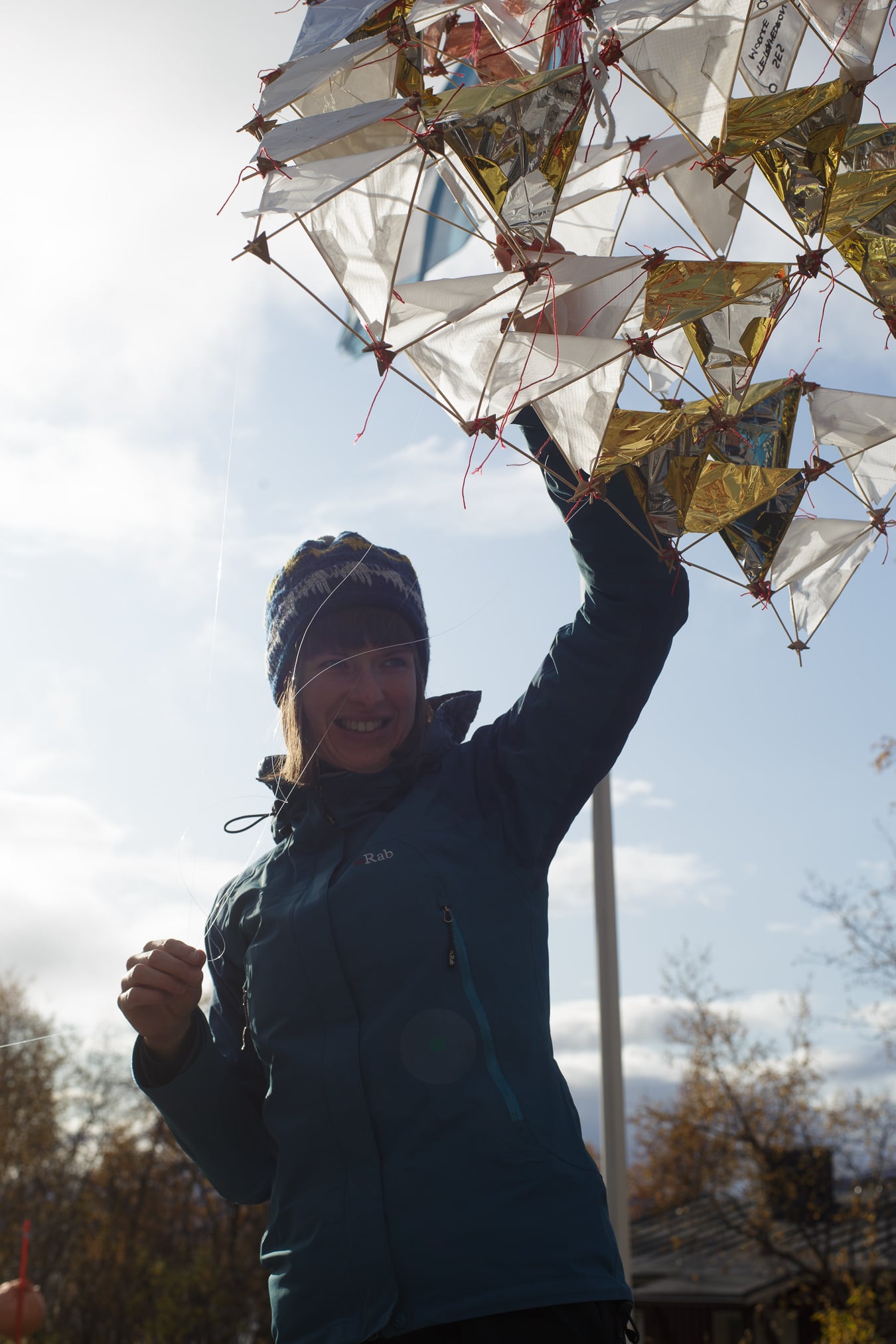 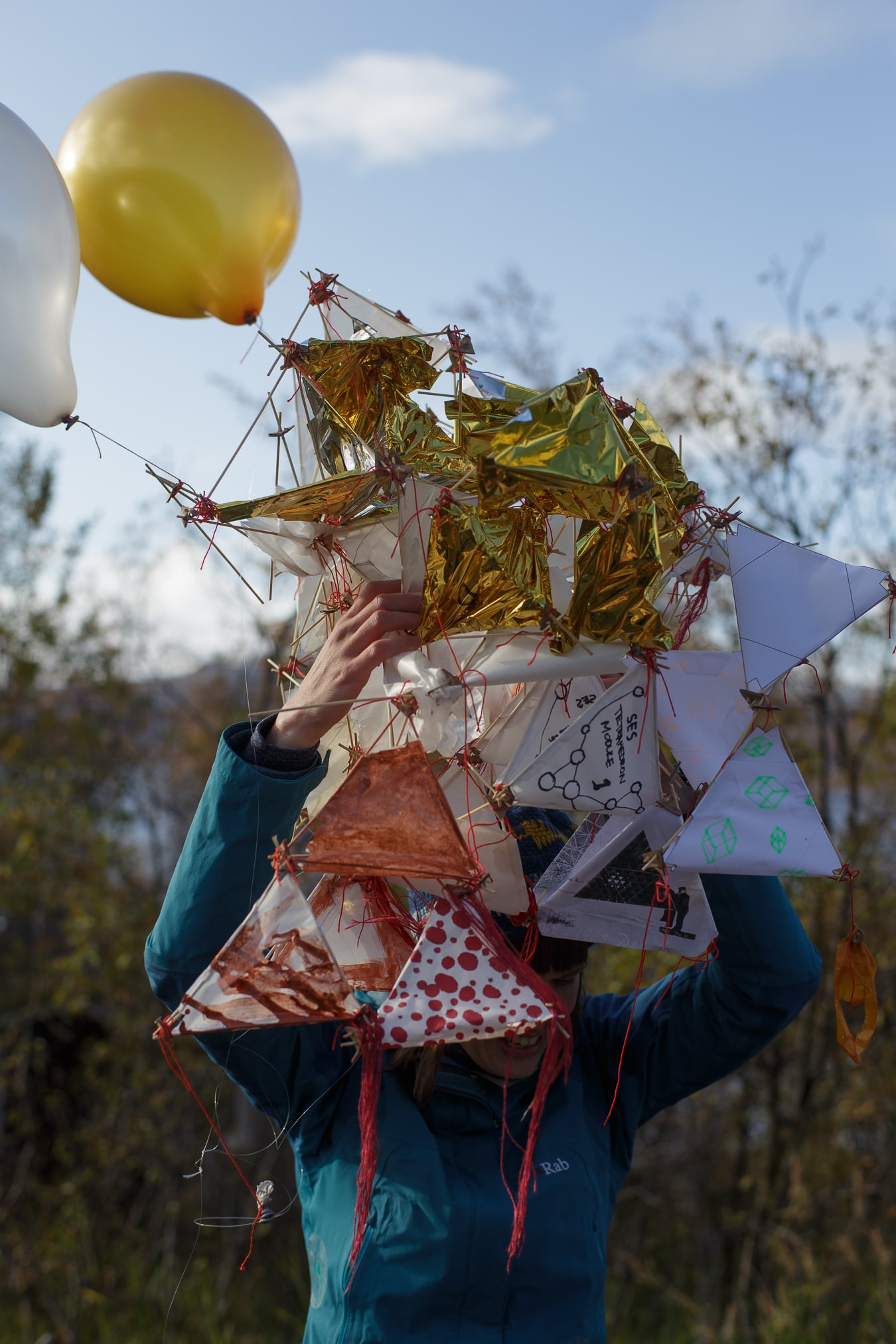 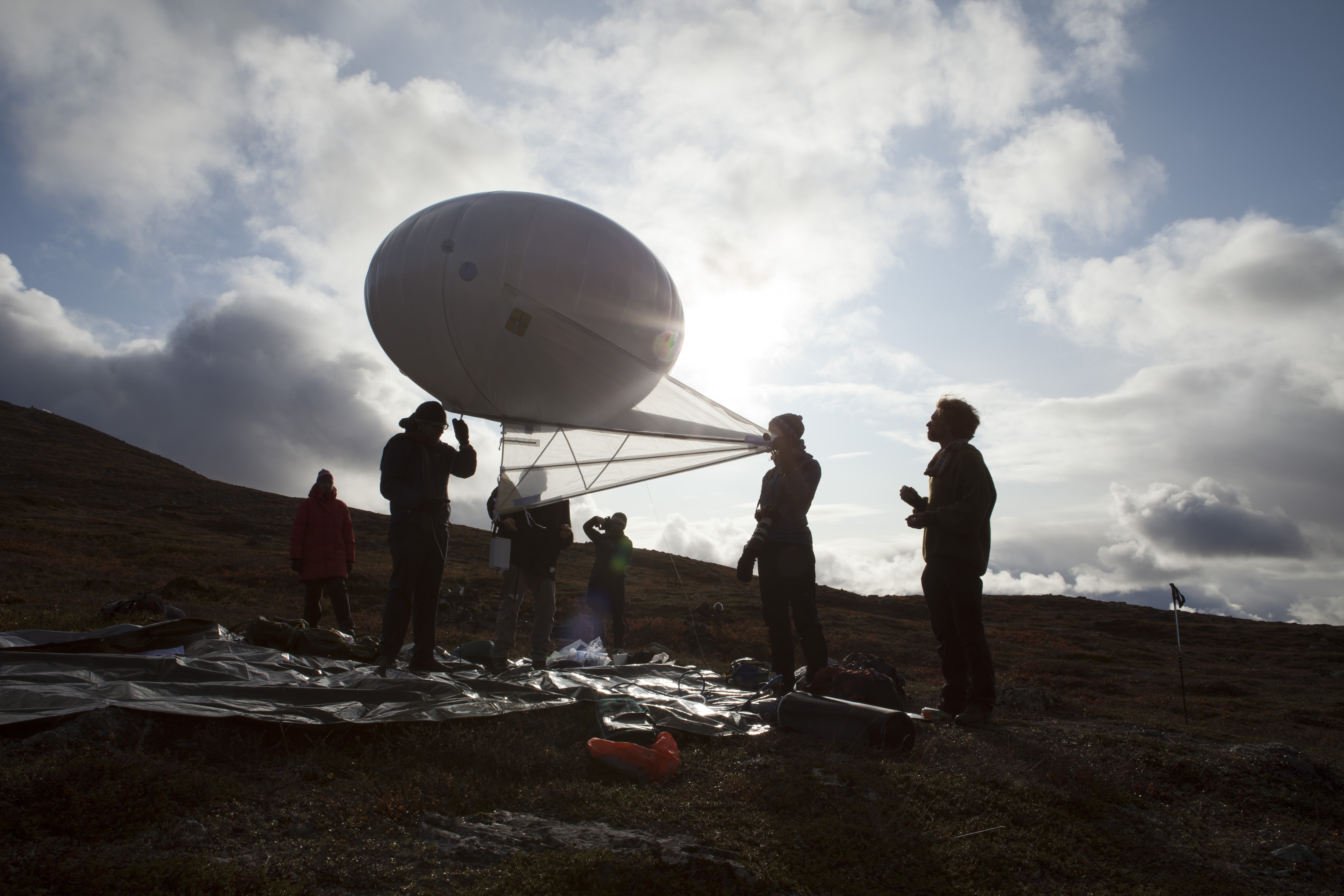 While working with the Helikite for several days, perceiving its ways of being during different times, weathers, winds – its liveliness became evident. What is the perspective to earth from its element? What is its experience while being with the winds? What can we learn from it? Curious of these, we attached to its body some devices: a 360 camera or a GoPro, a 360 sound recorder, outdated photosensitive paper, the latest HAB device for sampling wind and making altitude measurements. 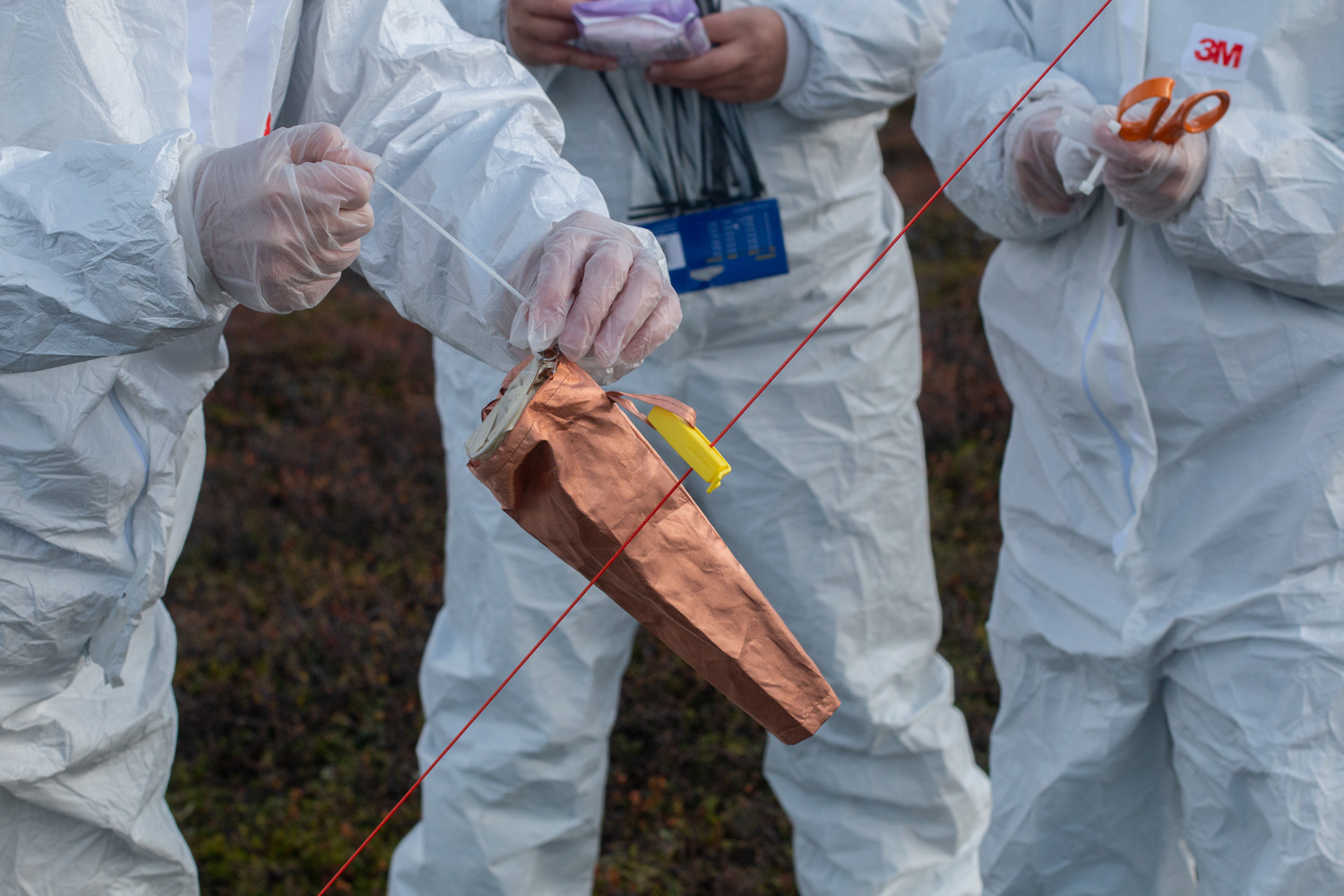 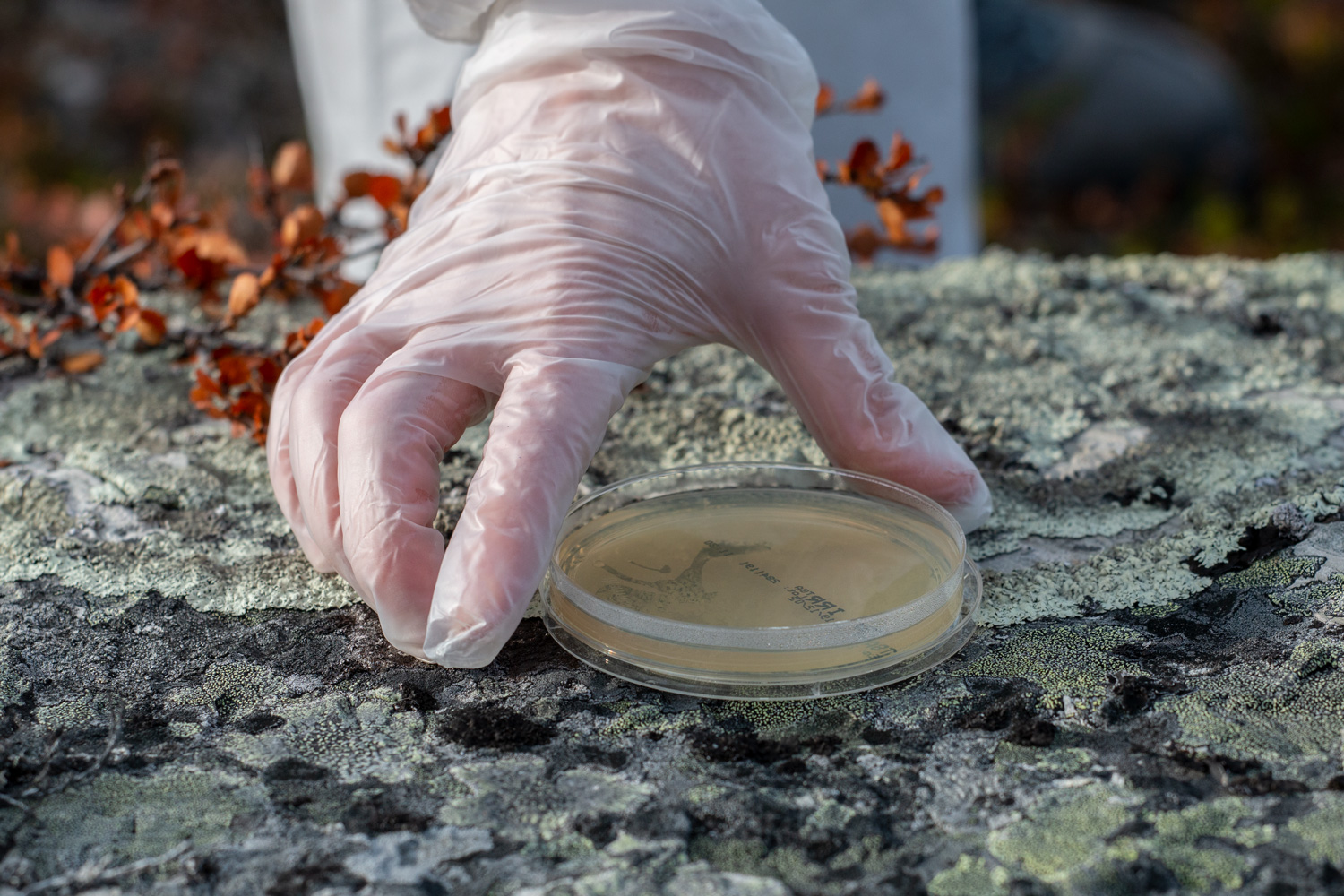 Even though we had traveled far past the Arctic circle, there was a surprising gentleness to the weather and terrain. The vegetation was surprisingly lush (would this mean we would find a lot of life in the air as well?) — we could see the round shape of our helikite reflected in the soft curves of the fells, rocks, and tufts of mossy vegetation surrounding it, and later in the globular bacterial colonies we collected with it. 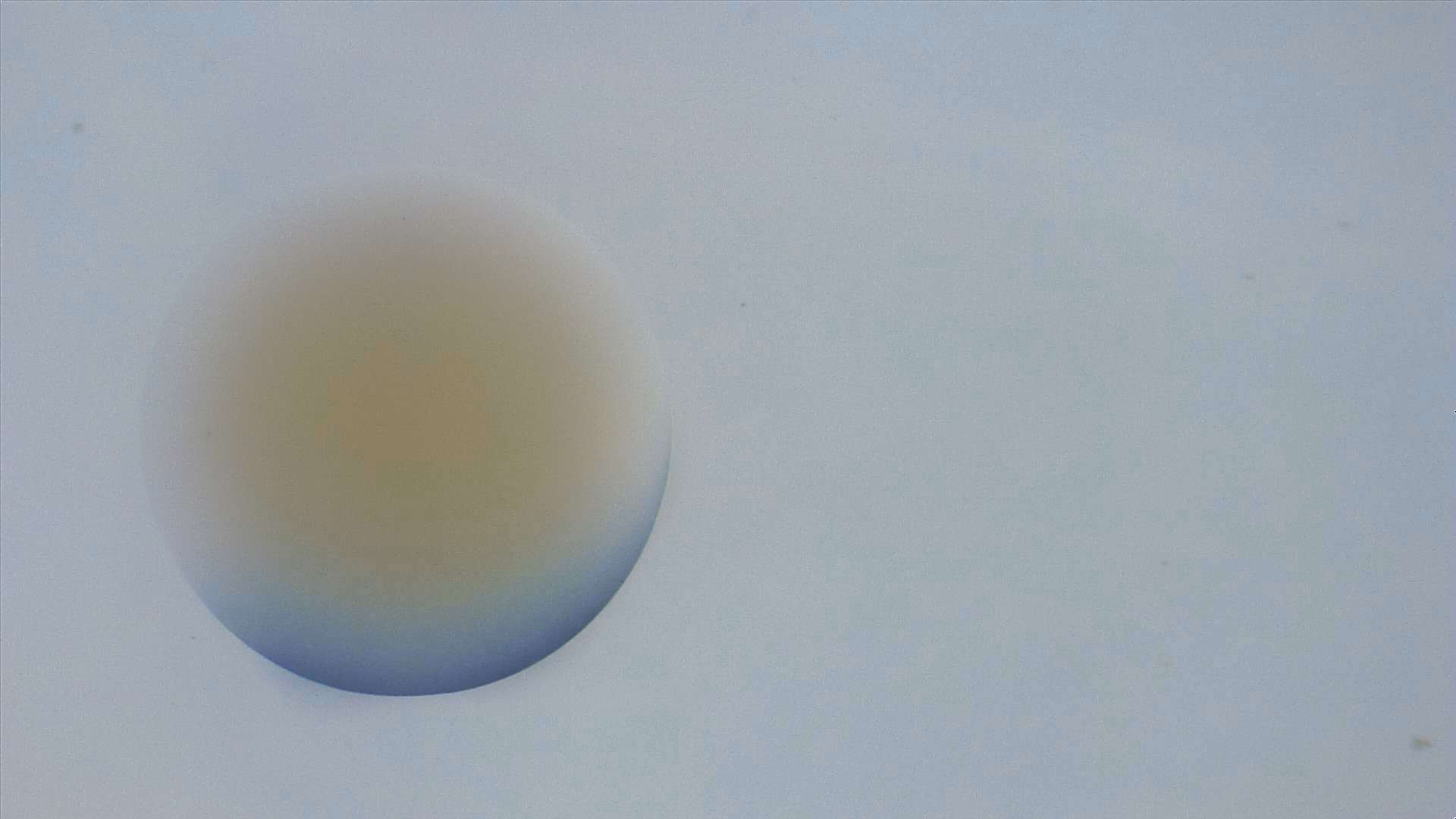 Glimpsing the first windsock-captured microbes through the microscopes in the labs of the biostation we could see tiny domes magnified for our eyes. Shiny smooth or rough colonies of bacteria, fluffy protruding fungal colonies: reflections of the Helikite, lenticular clouds and Petri dishes. Growth and accumulation of the microbes allows us to see them, ongoing work will help to identify them: will they be atmospheric, environmental or anthropogenic? 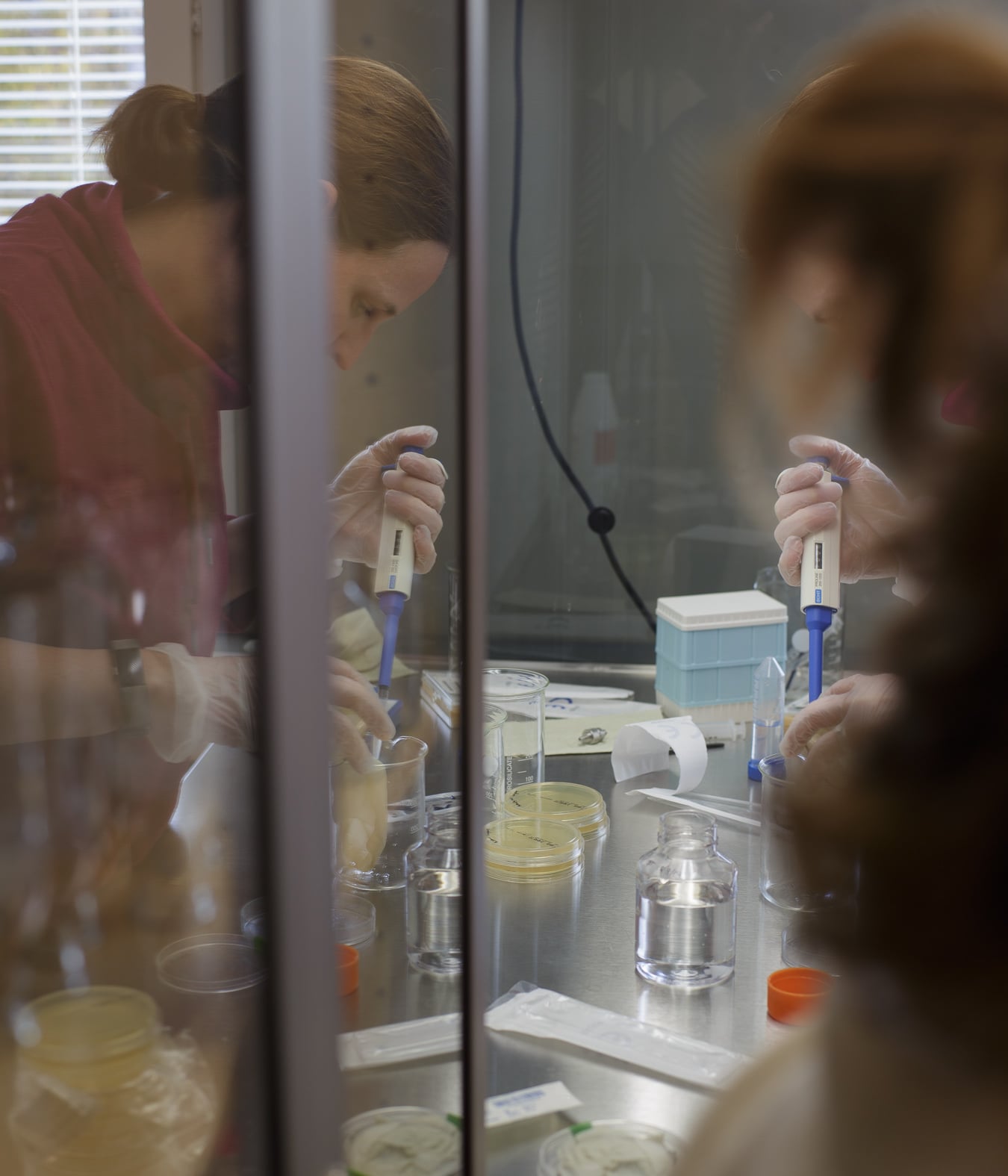 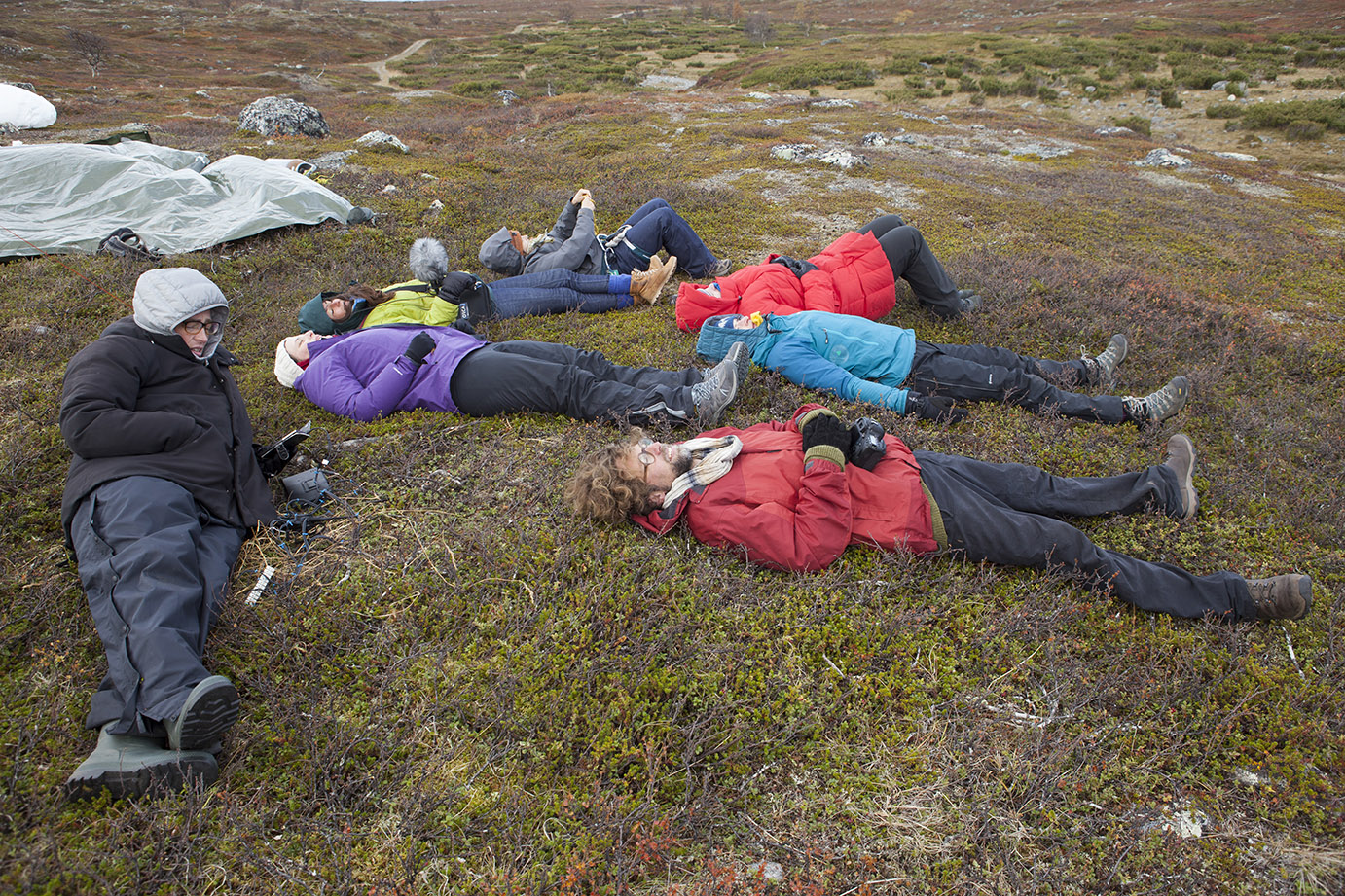 Looking at the Helikite looking at us, last flight (photo by Noora Sandgren)

During the last flight the whole group paused and brought our own bodies to the ground to spend a moment in silence looking up at the sky, observing the Helikite.
The silence, a break from the words and concepts of recent discussions, gave room to the language of the moving, wind-gas-kite body. This was an enjoyable connecting moment for all of us, a silent appreciation of everybody's contribution to situations created and data collected. 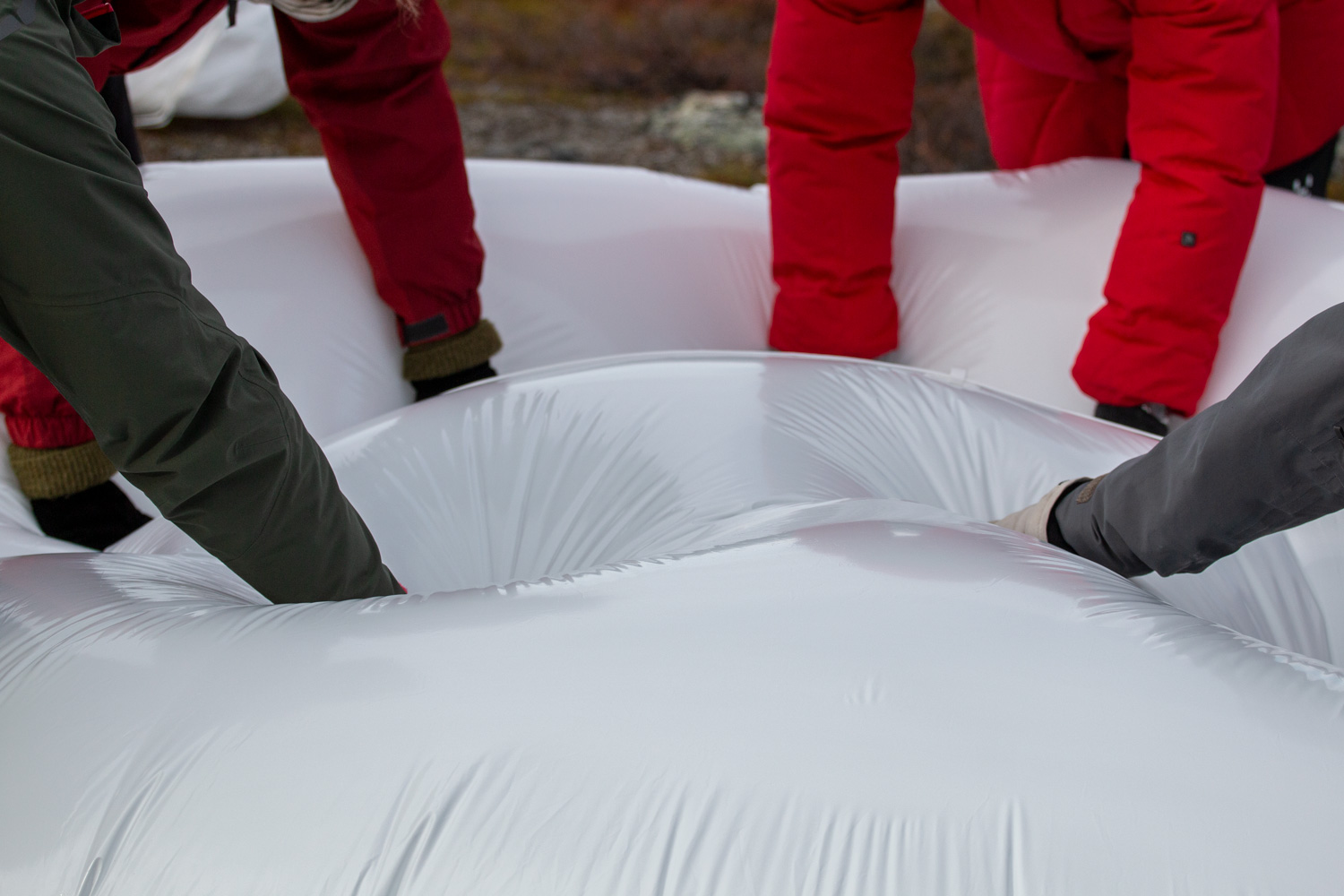 Deflation of the Helikite (photo by Hannah Imlach) 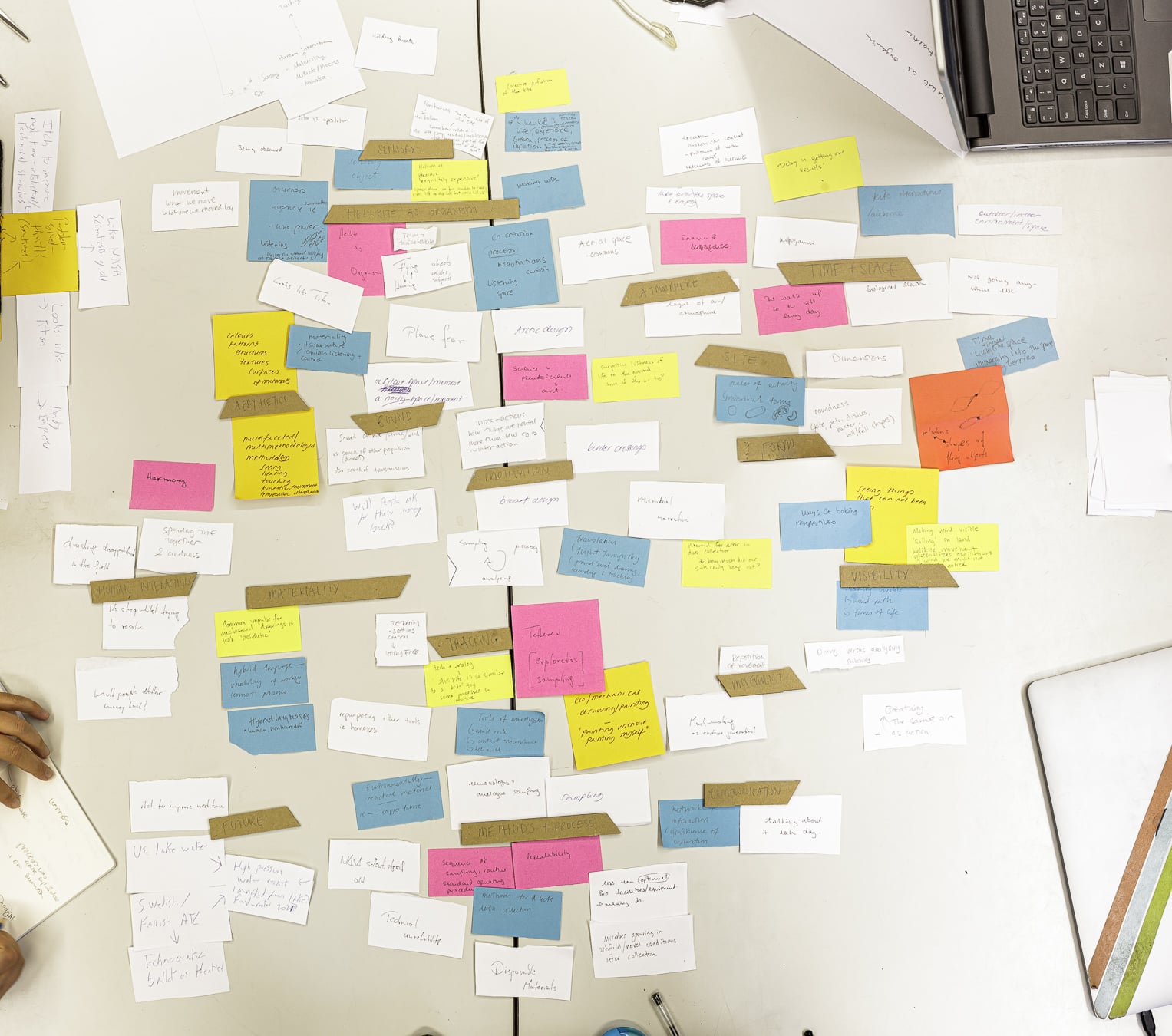 At the research base we gathered a shared mind map of ideas, words and concepts as a starting point for further processing and writing. Much of our work had been practical, the work of problem solving, so it was valuable to have time for group reflection.  Collectively we have gathered a diverse body of experiences and materials during Field_Notes residency and we look forward to developing this material in the near future.

We are left with questions:

Will the Helikite fly again? Will it reach greater heights? Or will the next HAB activity be to return to the stratosphere on untethered balloons or rockets? What will be found from the flights in Kilpisjarvi? What would be found elsewhere? Will the microbes be the same in different locations? Are there any microbes in the stratosphere? Where will the next flight be? What improvements can be made? Can other atmospheres be sampled?

The re-entry to our other lives has been tricky and snippets of Field_notes transporting us back to Saanavanka have been welcome. The Petri dishes prepared in Kilpisjarvi have arrived back at the lab in Birmingham  and the task of documenting and identifying the sampled microbial aeronauts has begun.

Field_Notes – The Heavens is part of the Feral Labs Network, which is co-funded by the Creative Europe programme of the European Union. It is further co-funded by Kone Foundation, the Ministry of Education and Culture Finland and Arts Promotion Centre Finland.