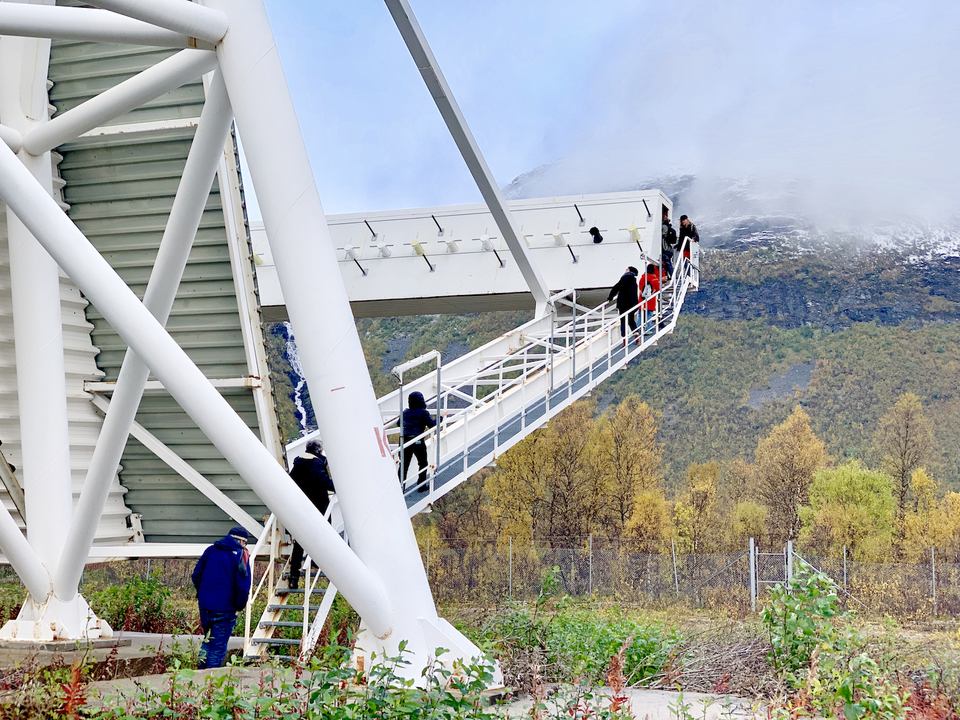 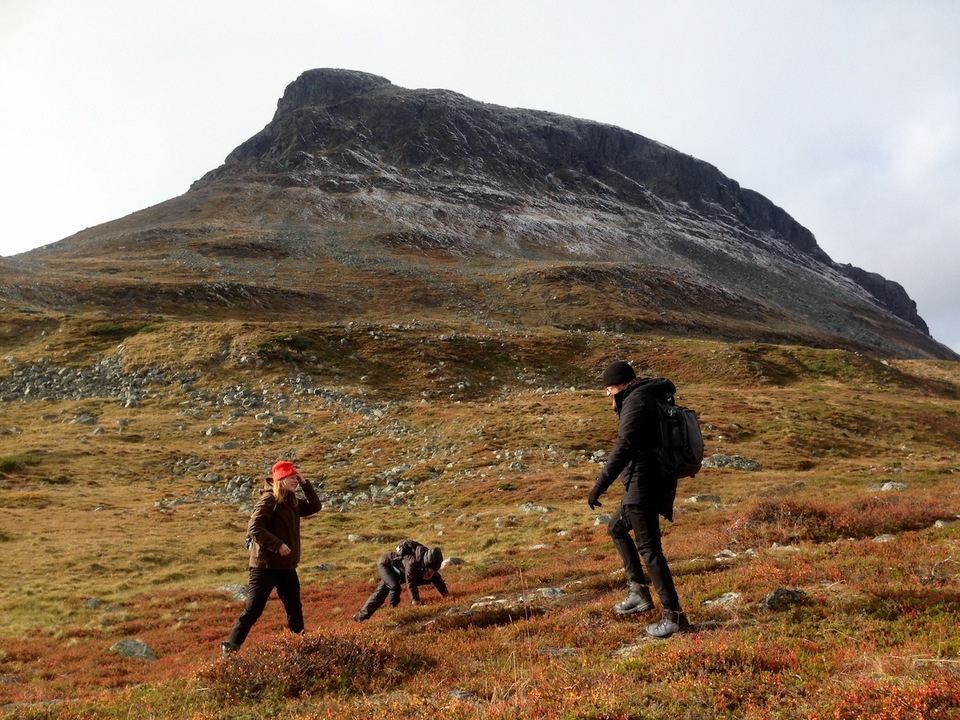 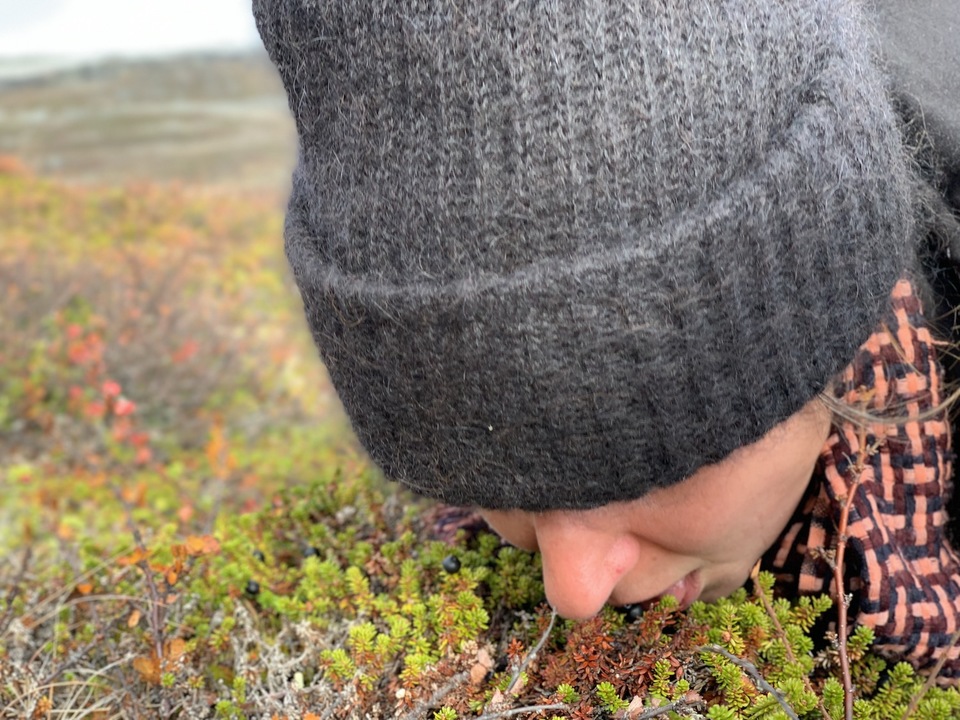 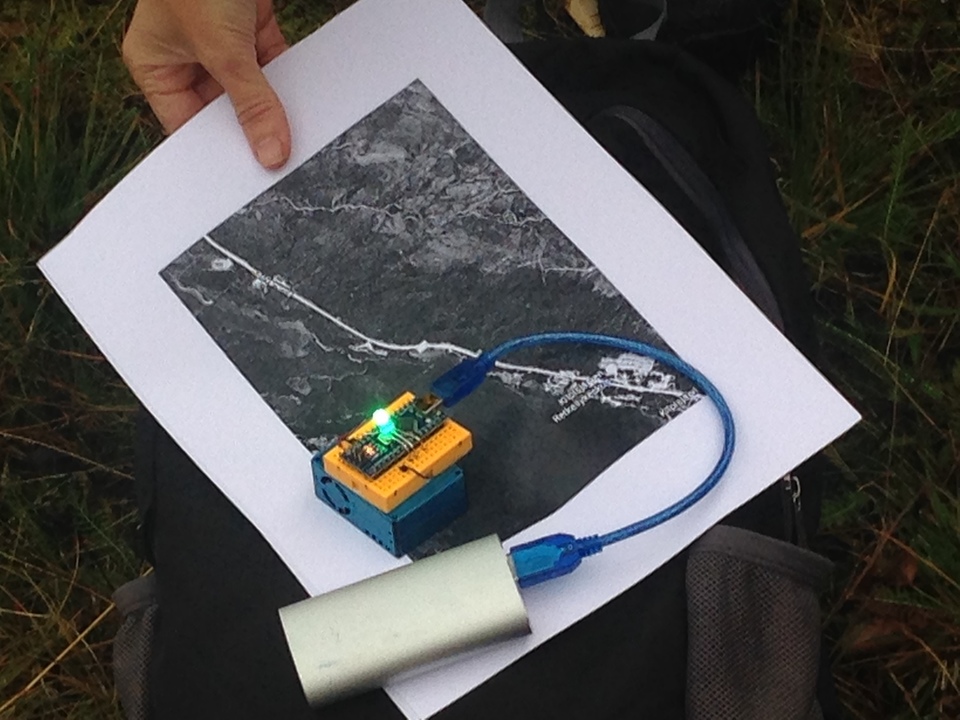 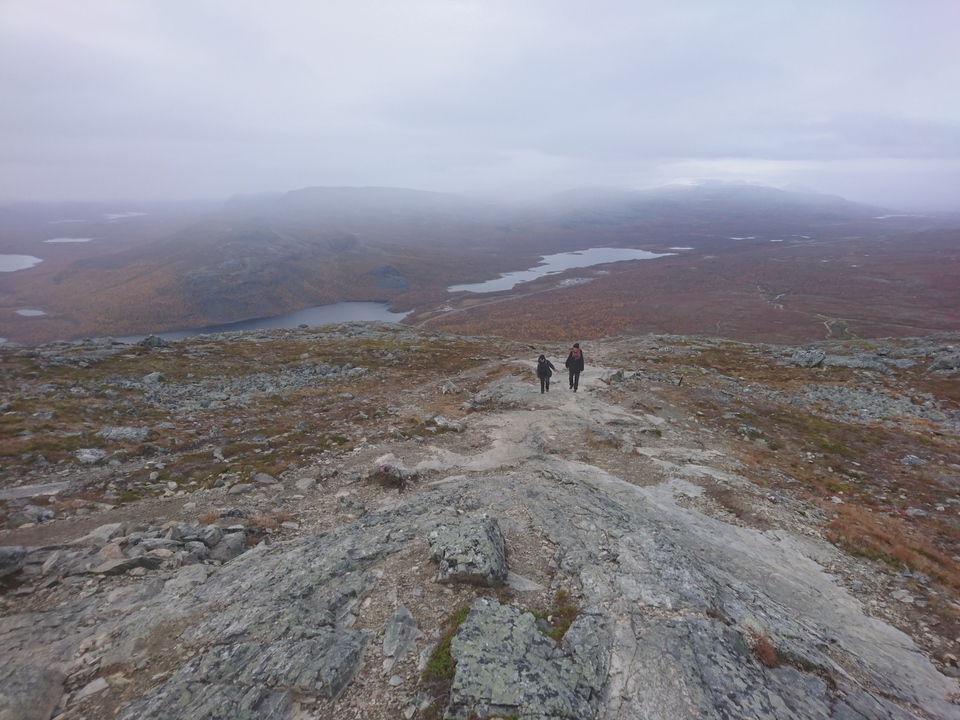 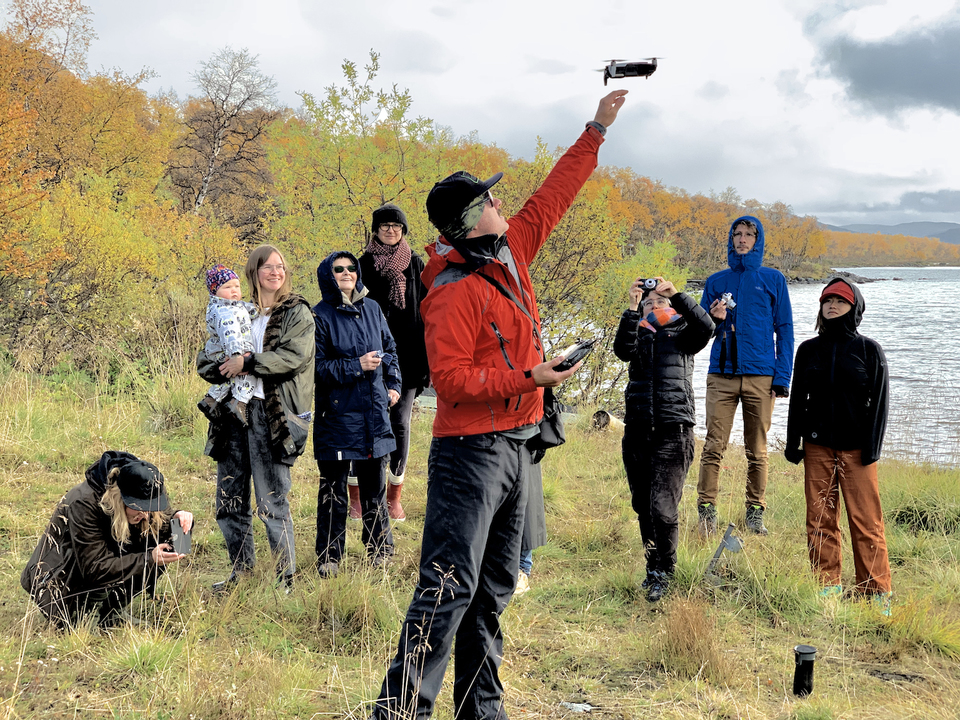 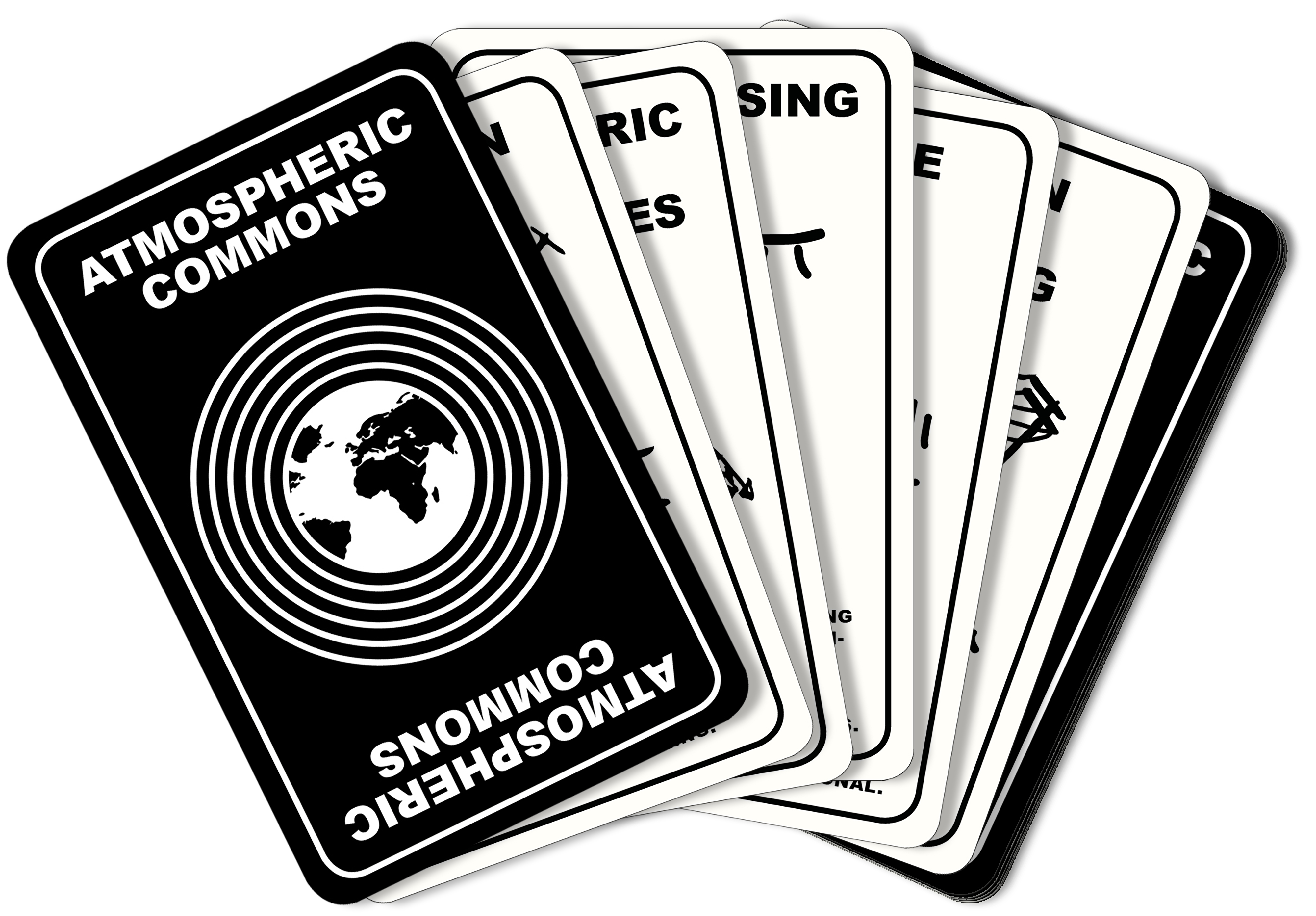 Air is inherently multiple. Mingling and mixing, air carries particulate matter, allergens, pollution, viruses, messages and signals. Connecting bodies, places and things at interscalar levels, air couples humans and other-than-humans to geospace. We constantly have air both inside and outside of us, and yet, the planetary atmosphere is predominantly an imperceptible and inaccessible phenomena. Because of its vastness and invisibility, our knowledge of the atmosphere is contingent on and mediated through techno-scientific apparatus, epistemologies, and infrastructures enmeshed in contingent histories of capitalism and corporate and military expenditures. This poses  a conundrum: how to engage, think with and care about a medium and element which structures our very existence, but which is predominantly imperceptible to human senses? In other words, how can we, without disregarding the conflicted imaginaries and problematic histories of both the atmosphere and the notion of commons, cultivate a speculative commitment to possible atmospheric commons, which promotes an ethics of air-care and aims to maintain liveable and equitable worlds?

Bringing together activists, practitioners and researchers in art, architecture, ecology, anthropology, and racial and gender studies, the Heavens Field_Notes Laboratory provided us with a unique opportunity not to probe these questions in isolation, but instead engage with them through practices of sharing, co-learning, and living together. Each participant contributed by leading an activity. These included film screenings, drone practice, embodied ways of knowing the air through walks, discussions on how to sense the problematics of air in relation to other coordinates of the land/scape, the colonial legacy of our research methodologies, deep sensing and more. In this way, experience, skills, methodologies and different perspectives relating to the construction of atmospheric imaginaries as well as the politics and poetics of noticing air were shared within the group. As an example, visiting the EISCAT radar facility, we attuned to the technological sensing of the upper atmosphere, while deep sensing experiments during the walks gave us the possibility to practice the unlearning of conventional ways of tasting and sensing the immediate environment. Recognising that taking time to share common space and making the effort to make ourselves understood without disregarding our differences can be difficult and demanding, we still maintain it as indispensable if we are not to resign on the idea of the commons and the possibility of common atmospheres.

Over the week a number of onto-epistemological approaches, frameworks, and methods for collectively working towards atmospheric commons emerged. Inspired by one of the proposed experimental methodologies, which by popularising concepts and stories aims at nourishing imaginaries of societal and political transitions, we decided to create a collection of cards that depict concepts which we found useful or inspiring. With the intention to complexify the narratives and to ground understandings of pockets of air as well as the global atmosphere, the cards are presented as fragments of an imaginative toolkit for fostering fruitful debates, strategies, and practices that can contribute towards an equitable common atmosphere. 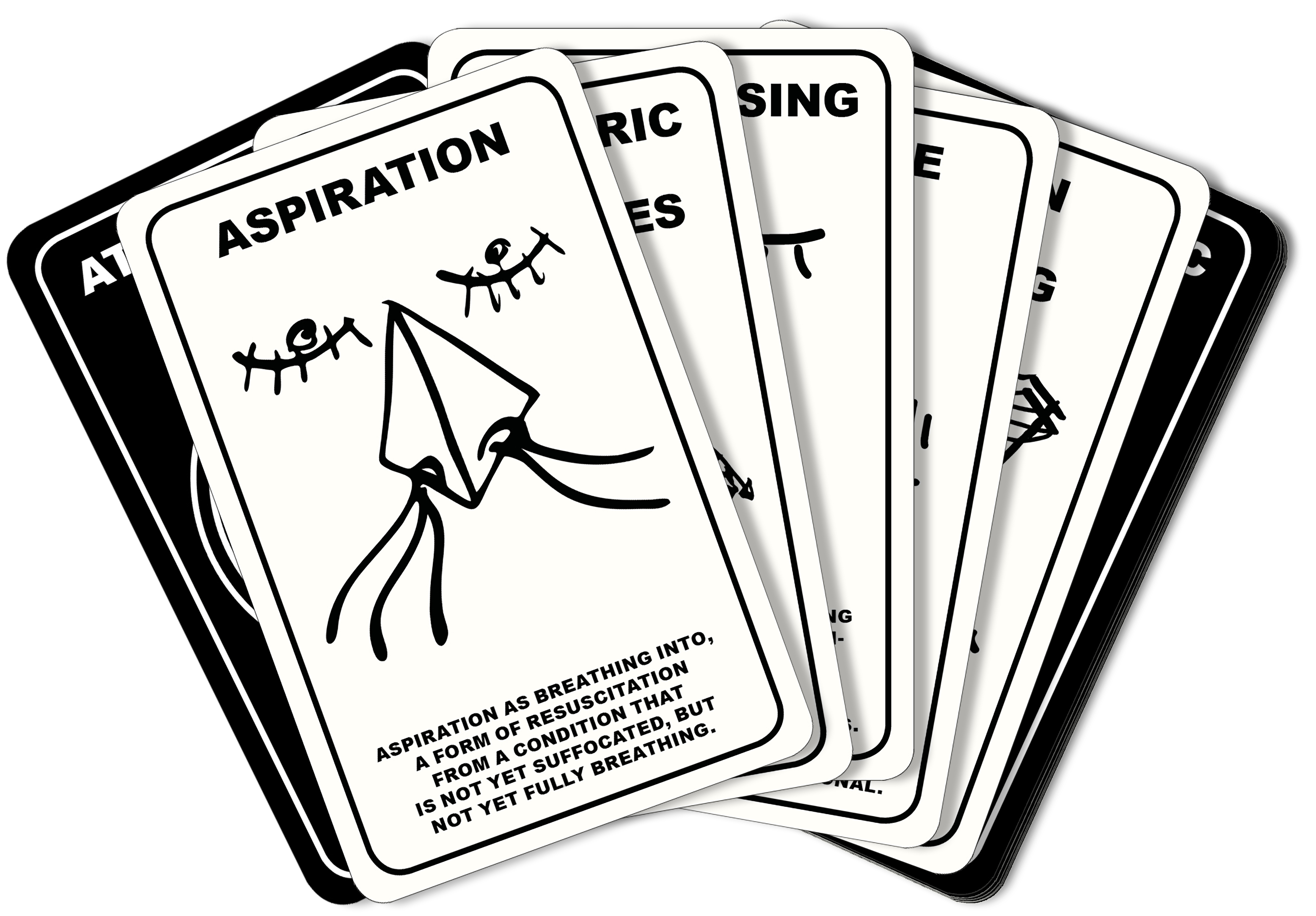 Aspiration is a desire, a longing, an aim and an ambition. Aspiration is also the act of breathing into — a resuscitation from a state of neither fully suffocated nor fully breathing. Thinking through aspiration is to call into question the self-evidence of air and the figure of the bounded individual body that breathes. The feeling of choking makes palpable the way in which air is materialized through a specific embodied practice of breathing, a practice, or perhaps a capacity, that is far from guaranteed. One thinks here of the unequally distributed capacity to breathe in China’s “choking smog”. The affluent can afford air purifiers and expensive masks to filter air, and can flee smog-hit areas by taking “lung-cleansing vacations” (as many internet users put it), whereas the underprivileged, who struggle to make a living, cannot not breathe in the toxic air. One also hears Eric Garner’s last utterance “I can’t breathe” that asks not simply about the precarity of life, but about how precarity is differentially induced and about whose life and future can be simply choked off, by whom.

The aspiration to more sustainable and livable life needs to be grounded in its relational condition: “breathing in the breath of the other in order to breathe” (Butler 2018). This entails critical engagement with relations of breathing, with how bodily boundaries become differentially materialized through breathing practices that are situated in specific and changing socio-economic and geopolitical contexts.  How do you breathe?  Who and what can breathe? Where and when? Thinking through aspiration is an ethical and political practice of relating as atmospheric commons. 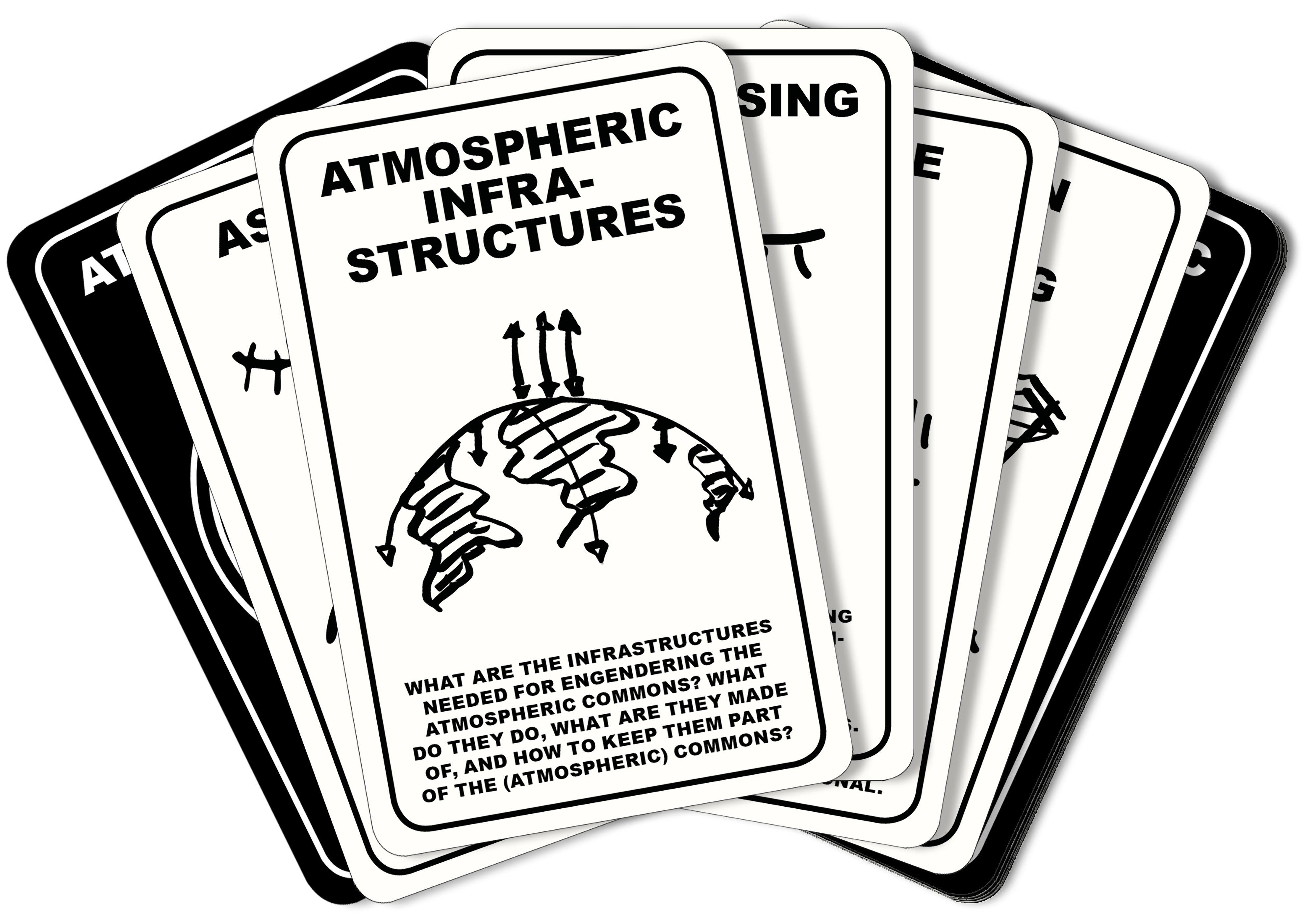 Infrastructures, such as networks of sensors, information panels, apps and other forms of digital access to data, are increasingly becoming cloud-like and imperceptible to human sensing. In this sense they become atmospheric, not only by making atmospheric phenomena perceptible, but also by reinforcing our sense of elementality — an understanding and experience of the earth afforded not merely through longitudes and latitudes, but also through elements, including the atmosphere as a sphere that affords movement, occupation and suspension. But how does that atmospheric condition black-box or limit our access to the processes of atmospheric knowledge production? Infrastructures are also atmospheric in an affective sense — they dynamically structure and organise possibilities of life, social forms and conceptualisations of the world. Therefore, the effective and affective power of infrastructures is produced through the atmospheric aesthetics they embody, and through the material, technoscientific, laborious, gendered, and environmental elements they entangle. 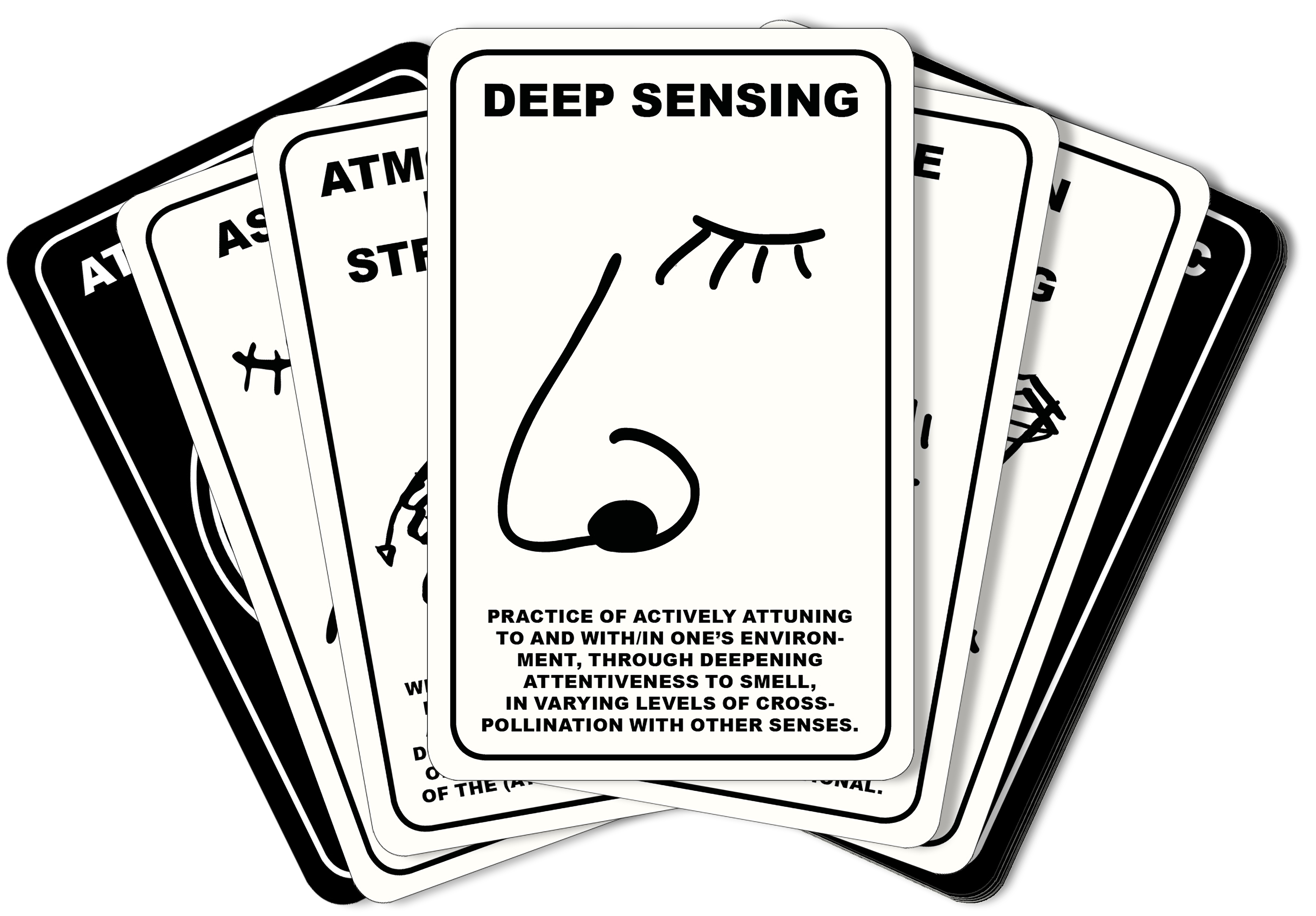 Through deepening attentiveness to smell, in varying levels of cross-pollination with other senses, the practice aims at situated sensing of atmospheric phenomena and their transformations. These may range from chemical compositions and pollution particles perhaps even to data. Building upon Deep Listening practice by Pauline Oliveros, while inspired also by Deep Mapping by Brett Bloom and Nuno Sacramento, the practice of deep smelling requires a critical acknowledgement of the complex politics of air with its myriad ethical and ecological implications.  Meanwhile it draws attention to the edges of signification, measure and language, at the porous embodied fault lines of contagion made sensible in the acts of smelling.

Experiments in deep smelling may include, for example, as practiced at Field_notes 2019: Embodied berry-feral approaches to foraging one can learn from other animals in the ecosystem inhabited / engaged with; Heightening atmospheric sensibilities by brewing different assemblages out of the encountered elements such as streams of water and plant life; Sharpening sensitivity to what is usually considered intangible such as radio waves by careful noticing, amongst others, of shifting temperatures and multispecies interactions, or dust and decay, in and around technological apparatuses. 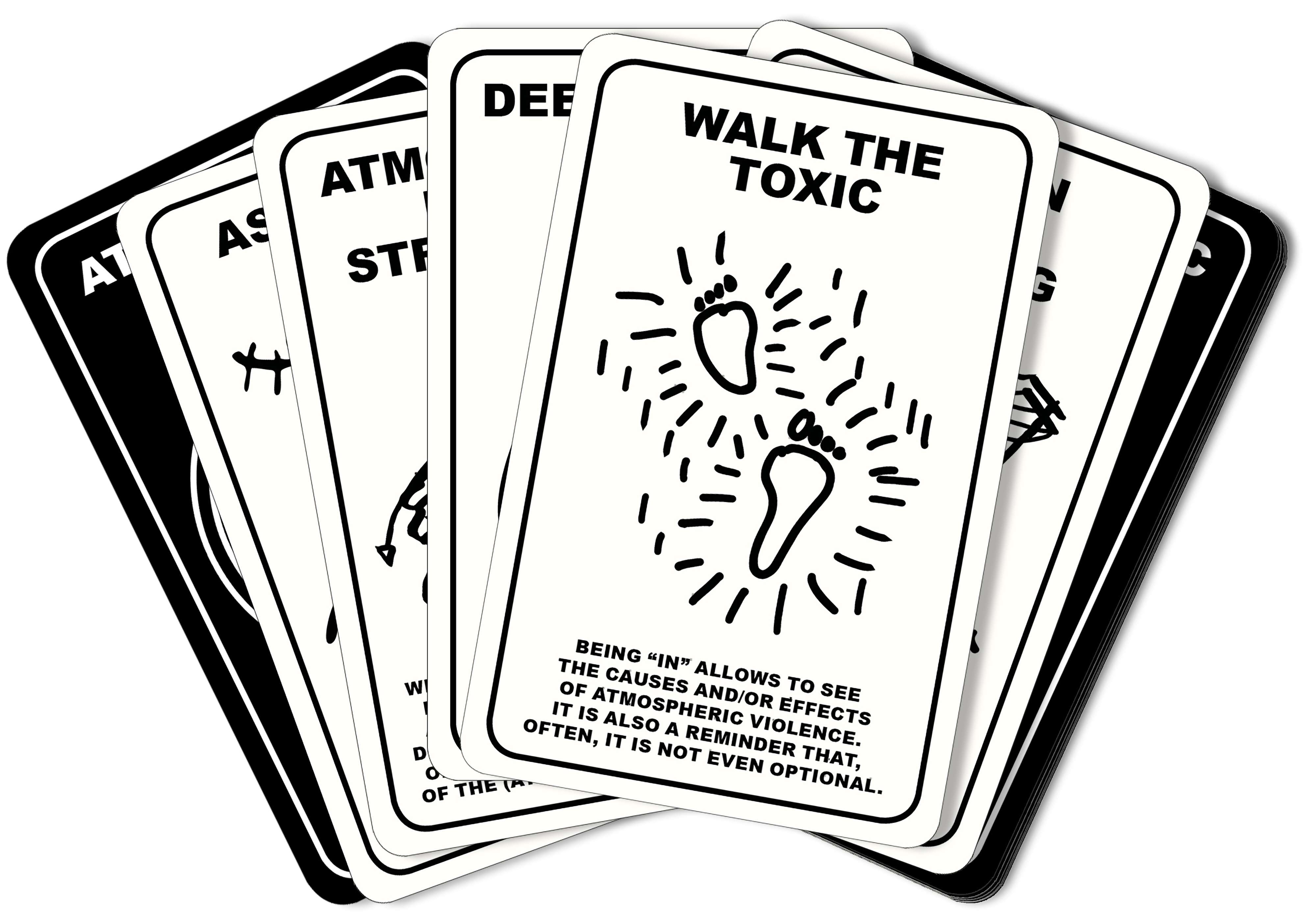 Air slips our senses and resists to be known. Although we constantly breathe, air and its pollution are usually considered as being “out there”. Something from which we can be protected by filtered interiors, that keeps the unwanted (dust, virus, germs, and so forth) outside. This belief is at the core of the problem, because there always seems to be a solution — larger enclosures, stronger boundaries — and pollution remains untouched and our bodies have lost their capacity of attuning to environmental conditions. At the same time, technological instruments are the only devices that have been legitimised to produce evidence of air pollution. And yet, that limits what we can know.

Walking the toxic can be a method to keep our bodies “in” the trouble, as feminist activists have claimed, to recognise the devices or systems that produce pollution, as well as the effects and violence that it creates in other bodies – human or not. This “inbodied” condition of the walk also facilitates our bodies to (re)learn to be affected and to sense not only the air or its pollution, but also contagion amongst the walkers, as a form of transmission by in/direct contact, spreading an idea of practice.

Walking the toxic is also a way of thinking about nature and understanding the scale of toxicity. As recent studies have demonstrated, even in the most remote corners of the planet air carries microplastics and other pollutants. There is no pristine nature. Although pollution and its effects are based in an inequality and not evenly distributed, we live in a toxic planet. So any walk is a walk through the toxic, of course, with varying intensities and affecting different bodies differently. 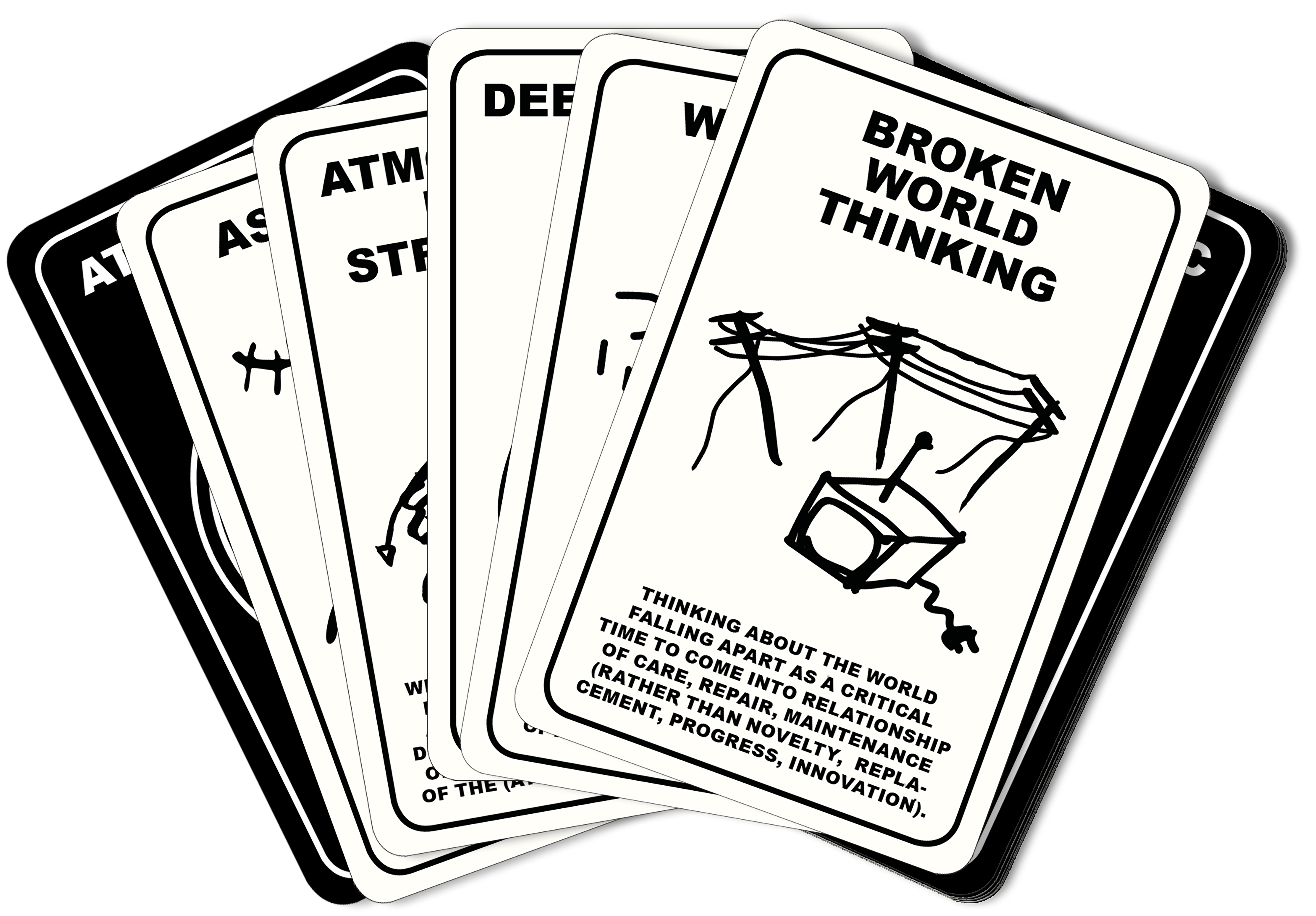 It is not only drones that crash. Seventy-five percent of the earth and 66% of the sea are severely degraded by human activity; this is threatening 1 million species with extinction (Diaz et al. 2019). Sixty-percent of wildlife has disappeared over the past 30 years (World Wildlife Fund 2018).

Drones provide a means of sensing the earth; witnessing these human impacts, diminishing habitats, and disappearing wild animals. And yet, even when the drone is crashing or has crashed it remains an important object through which to understand the emergent relationship between humans, technologies, and species. We need to better understand relationship through the event of the crashing drone, exploiting a material link shared by crashing drones and collapsing species. This is “broken world thinking,” an ethos that invites us to consider how repair and care governs inter-species co-dependencies.

In the crash’s aftermath, we must ‘consider what might be salvaged from the wreckage’ (Redrobe, 2010, p. 22). The ‘world-disclosing properties of breakdown’ (Jackson, 2014, p. 230) bring focus away from invention, innovation, and novelty and to the forces of refuse, recycling, and repair. As entropy — the eventual demise of hot and complex formations to cool and simple forms — and the contingencies of atmospheric exploitation erode stability, an ethical role emerges for maintenance. ‘[B]roken world thinking’ (Jackson, 2014, p. 221) provides an ethical framework for approaching the crash’s aftermath. Science and technology scholar Steven Jackson’s ‘ethics of repair’ asks us to commit to care for a world falling apart (2014, p. 232). The crashed drone and the near-extinct species — this is what remains for reworlding through multispecies care.

Field_Notes – The Heavens is part of the Feral Labs Network, which is co-funded by the Creative Europe programme of the European Union. It is further co-funded by Kone Foundation, the Ministry of Education and Culture Finland and Arts Promotion Centre Finland.