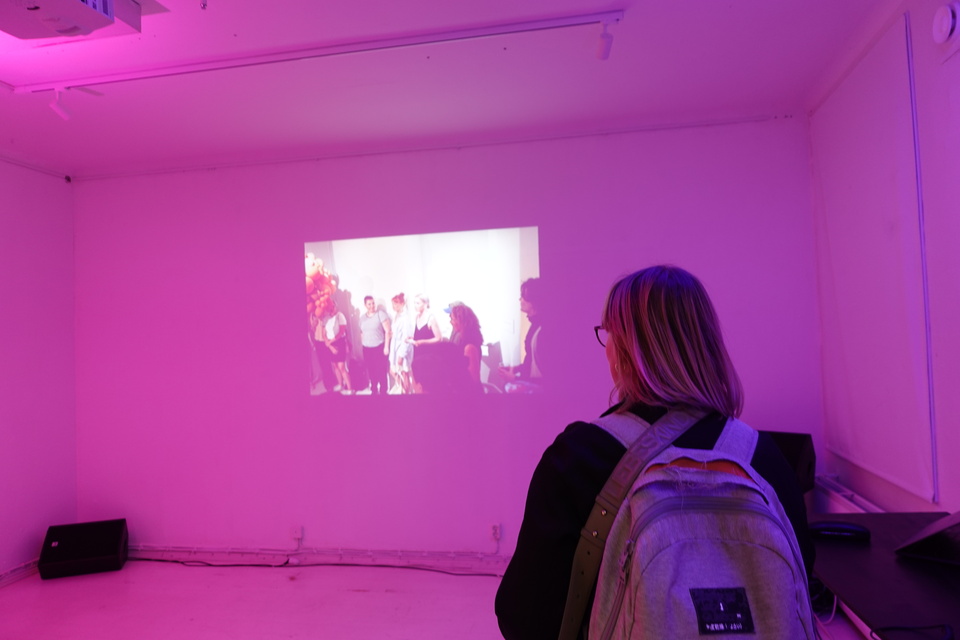 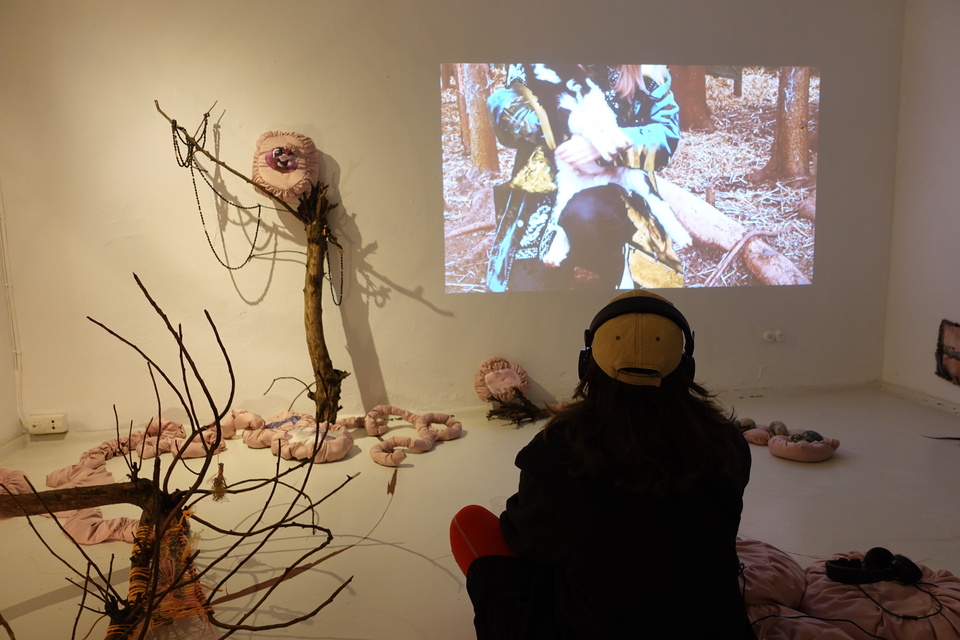 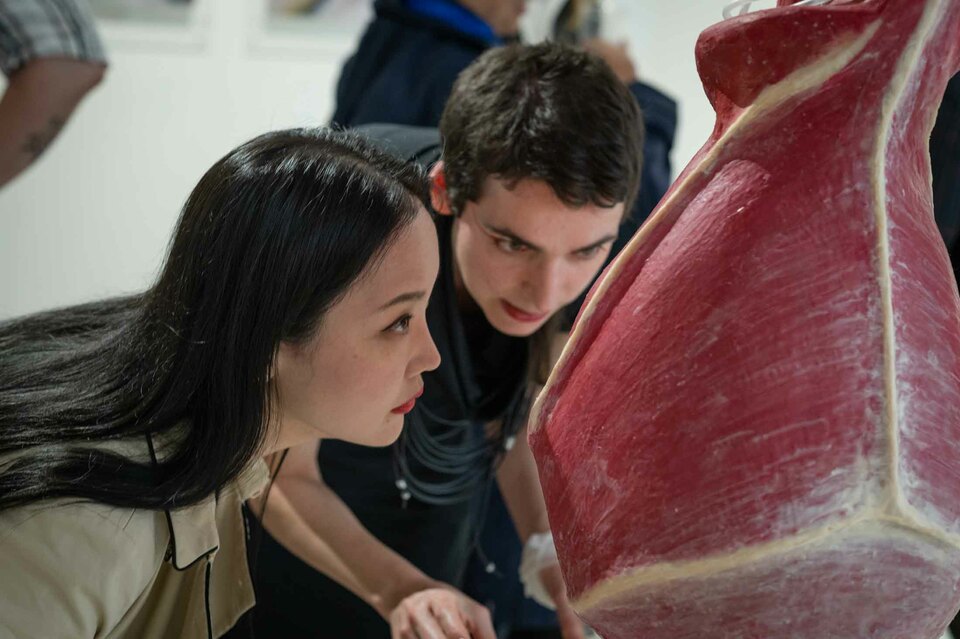 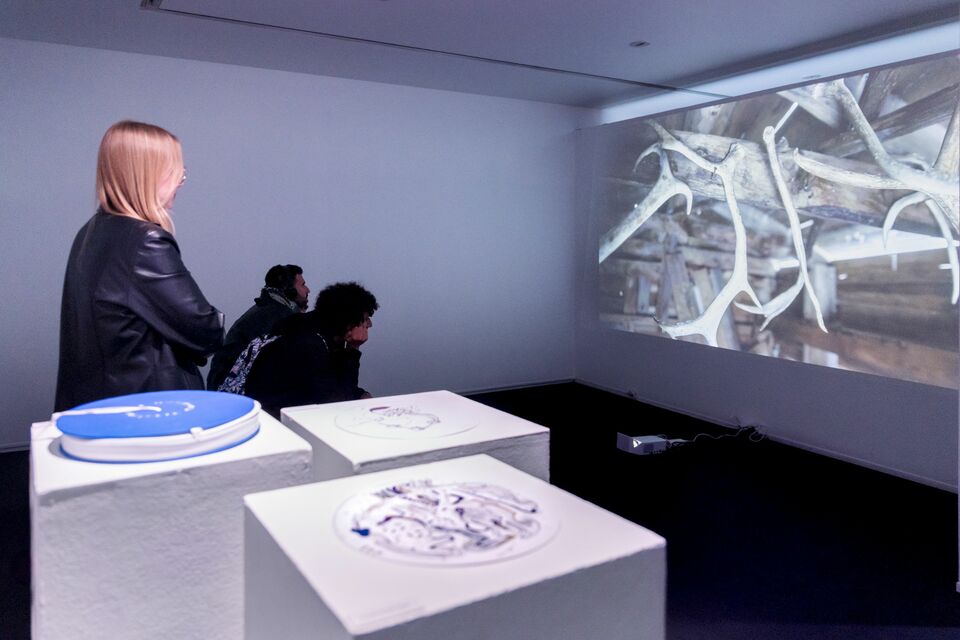 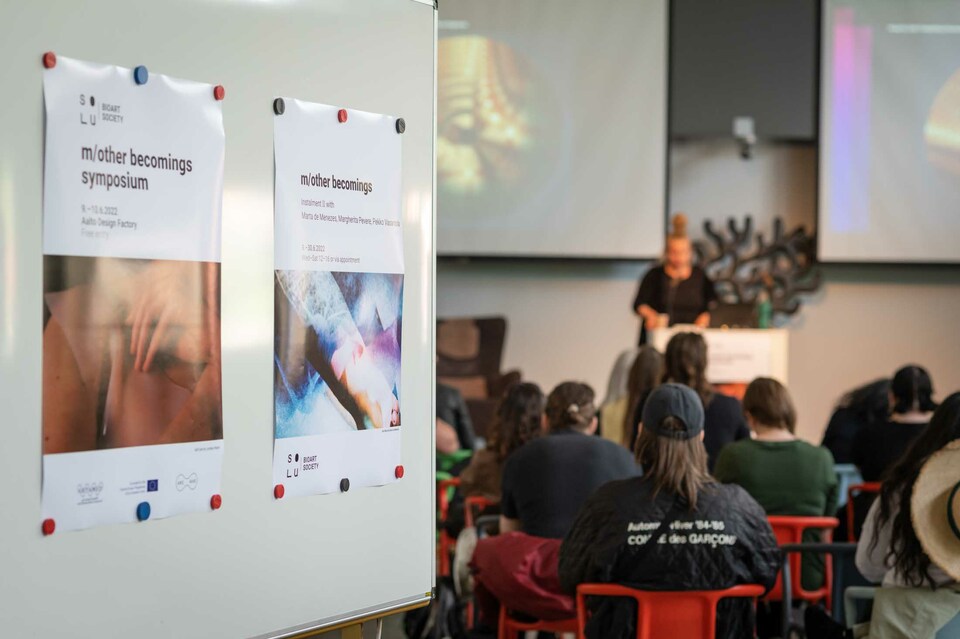 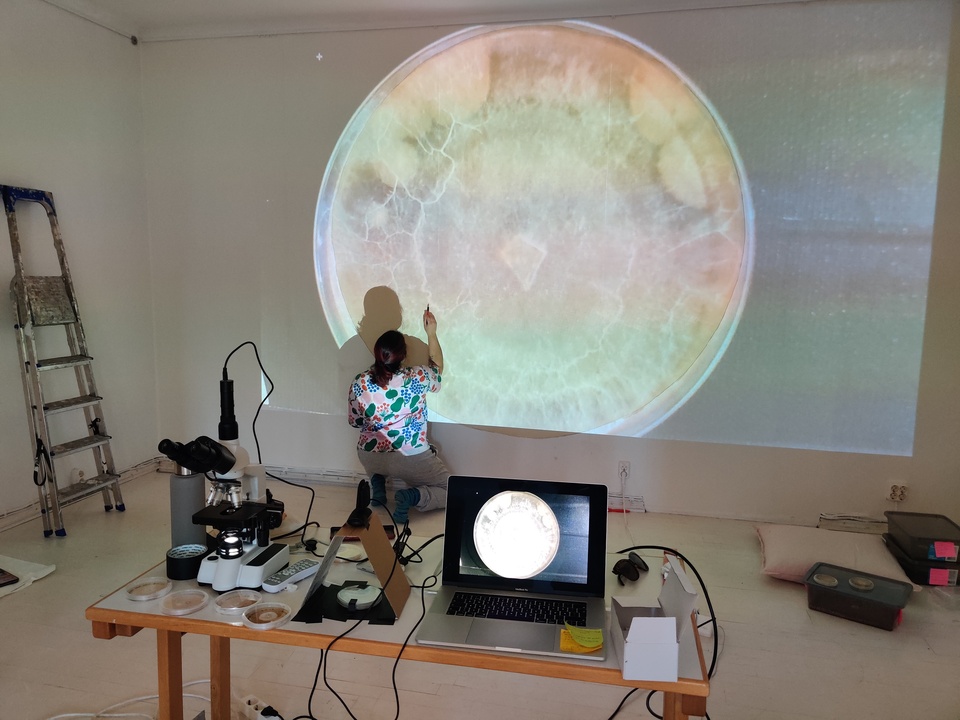 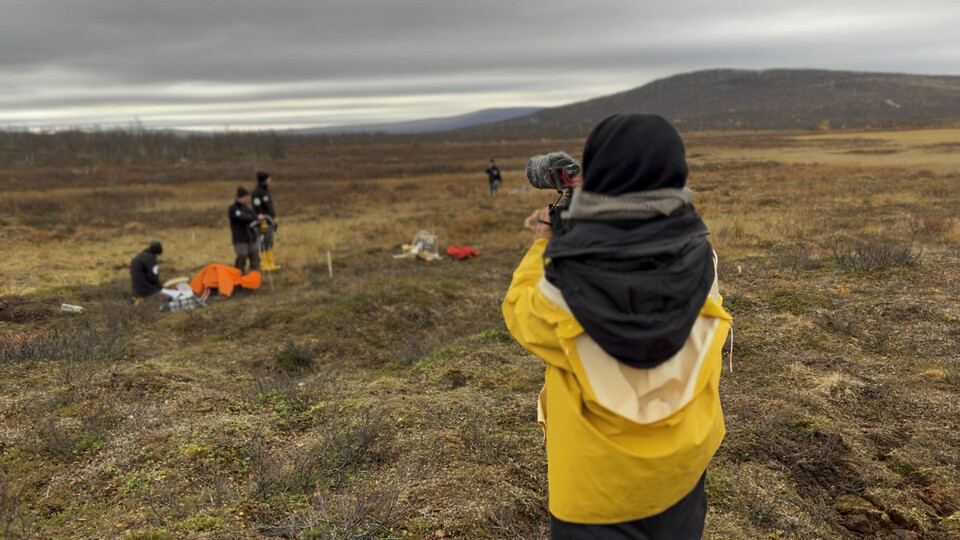 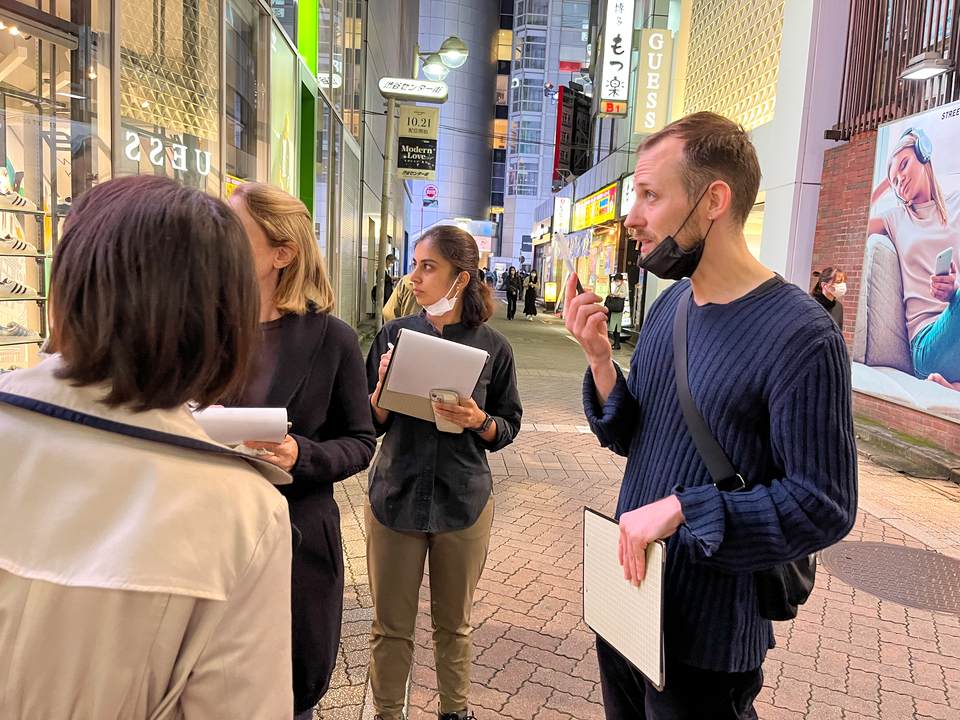 With another year passing in a flash, it is time to reflect on the phenomenal year at Bioart Society. Once again, we have continued to run and develop our transdisciplinary programme in active collaboration with numerous artists, practitioners, organisations and other actors to create a diverse program of exhibitions, workshops and other various events.

We started the year with SOLU Space residencies. This mini-residency programme was orchestrated at the end of 2021 to support our members and to counteract COVID-19 reducing residencies and other working opportunities for artists. Each selected artist got the opportunity to use the SOLU Space for two weeks to work and received a material budget and a working-fee. The selected artists included Emilia Ukkonen, Ines Montalvao, Annina Antinranra, Mari Keski-Korsu, Noora Sandgren, Shreyasi Kar, Agnieszka Pokrywka and Lau Kaker.

After a year, we were able to activate the Tokyo Art & Science Research Residency programme again, and Aaro Murphy was selected for this month-long residency. Murphy conducted his residency in Japan in October-November. He dedicated his residency to researching urban scents found in Japan, Headspace technology and machine olfaction. You can read more about Murphy's experiences in his blog posts on our website.

Exhibitions: To SOLU and Beyond

Before saying our goodbyes to the beloved SOLU Space in September, we managed to host three different exhibitions at Katajanokka. The first exhibition was the m/other becomings instalment I held in May, followed by the m/other becomings instalment II in June and MNEMONIA from mid-August to early September. The two exhibition instalments were part of a larger collaboration project among cultural institutions, artists, and thinkers called m/other becomings (2021–2022) which took a closer look at the im/possibilities of mothering, not as an essence, but as troubled practice and as a modest, utopian, and oftentimes exhausted precursor of hope. The first instalment included works from Riina Hannula, Lyndsey Walsh and Rian Ciela Hammond and the second from Marta de Menezes, Margherita Pevere and Pekko Vasantola.

MNEMONIA was a collaboration between Emilia Tikka, Oula A Valkeapää and Leena Valkeapää, built on speculative histories where centuries-old migration in the rhythm of the reindeer intertwines human, reindeer and landscape. The opening took place during the Night of the Arts. MNEMONIA was part of the Creative Europe collaboration project ART4MED (2021–2022) which centres on the intersection of art, health, and biomedical research. The collaboration was later exhibited in Paris as part of More Than Living, an exhibition including all the artworks done in the framework of ART4MED.

Workshops, Seminars and Other Events

On top of exhibitions and residencies, we organized and hosted a multitude of different events happening both online and offline, including workshops, seminars, a book launch, and a mini festival.

In March we organized the m/other becomings workshop in which we took a closer look into what happens when the technologies and politics of the maternal are unleashed from the affective and economic structures of hetero-normative reproduction, from natality, and even from species’ genealogies. The workshop took place in Aalto Design Factory and included presentations by Ida Bencke, Riina Hannula, Marta de Menezes, Emilia Tikka, Lyndsey Walsh and Adam Zaretzky. We also facilitated two editions of the popular soil chromatography workshops, hosted by Sirja Moberg and Aino Johansson. The first workshop, Down to Earth II, took place in SOLU Space in April and the Down to Earth: The Mapping Session was held at Aalto Design Factory during autumn.

In April, the Bioart Society took part in the online seminar Imagining the Baltic Sea hosted by Andy Best and Merja Puustinen. Also in April, SOLU Space hosted the book launch of the Permian Collection by Axel Straschnoy. The Permian Collection reflects on the natural history museum's role in the Anthropocene, addressing the museum both as a biotype and an agent of change. During the launch event, Curator and Art Historian Katarina Lopatkina and Professor Emeritus Jyrki Muona conversed with Straschnoy on the issues addressed by the project. Bioart Society also hosted the Emergence, Microbes, Governing Bodies mini festival at SOLU Space in June as well as an open lab for making artificial intelligence art by the Brains on Art collective in July.

In September, we said our goodbyes to our dear SOLU Space at Katajanokka. SOLU Space opened in October 2018 as an artistic laboratory and platform for art, science and society. During these years, we have hosted 21 exhibitions, 14 workshops and 68 artists on our premises. However, now we are in the process of ecdysis and hope to share some big news with you in 2023. Stay tuned!

Possibly the biggest event of the past year was the m/other becomings symposium, which took place in 9–10 May at Aalto Design Factory as well as online. The symposium was the fruition of the two-year collaborative project by the same name. The symposium keynote speakers were Ionat Zurr, Lesley-Ann Brown and Tiia Sudenkaarne. Ida Bencke, Margherita Pevere, Signe Johannessen, Emilia Tikka, Lyndsey Walsh, Riina Hannula and Chessa Adsit-Morris also gave presentations or participated in the panel discussions during the symposium.

This year we also published the new Member Catalogue, in which 60 Bioart Society members exhibit their work. The Catalogue benefits the members who can introduce their work to curators, fellow artists and practicioners and to the wider public as the Catalogue is a valued resource often utilized by Finnish and international curators and other art professionals. The Bioart Society took also part in two different publications: Arc-hive: Case Studies and Life as an Object and the ART4MED booklet, both of which were the fruition of different Creative Europe collaboration projects.

During 2022, we also welcomed a new Communications Manager Milla Millasnoore. Additionally, we were happy to be able to host three interns throughout the year, including Genietta Varsi, Mathilde Palenius and Ellenor Rose Nish.

In 2022 we completed three different multi-year projects including ART4MED, Arc-hive and m/other becomings. We will continue with the State of the Art Network (2020–2023) project still next year. During 2022 we also started two different multiyear projects, both under the Creative Europe programme: Restorative Practices (2022–2023) and Rewilding Cultures (2022–2026). Restorative Practices connects like-minded organisations focused on sustainability and bioart practices to enhance better future transmission of knowledge and build new realities through this intersection. The Restorative Practices partner associations include Bioart Society (FI), Cultivamos Cultura (PT), UR Institut (HR), and Casa do Rio (ES) which leads the project. Rewilding Cultures wants to reposition the wild after COVID-19 and focus on inclusivity and ecology within the art, science and technology. The partner associations include ART2M / Makery (FR), Bioart Society (FI), Catch (Helsingør Kommune) Center for Art, Technology and Design (DK), Cultivamos Cultura (PT), Ionian University (GR), Radiona (HR) Schmiede Hallein (AT) and Projekt Atol (SI) which leads the project.

Throughout the year we have received funding from A.P. Møller Foundation, Arts Promotion Centre Finland, City of Helsinki, the Creative Europe programme by European Union, Jenny and Antti Wihuri Foundation, Kone Foundation, the Nordic Culture Fund, Nordic Culture Point, and Ministry of Education and Culture. We want to sincerely thank all of our marvelous supporters for making our transdisciplinary and ambitious programme possible during this year. We also want to thank all other supporters, collaborators, partners and audiences for a wonderful year. We look forward to seeing you in 2023!