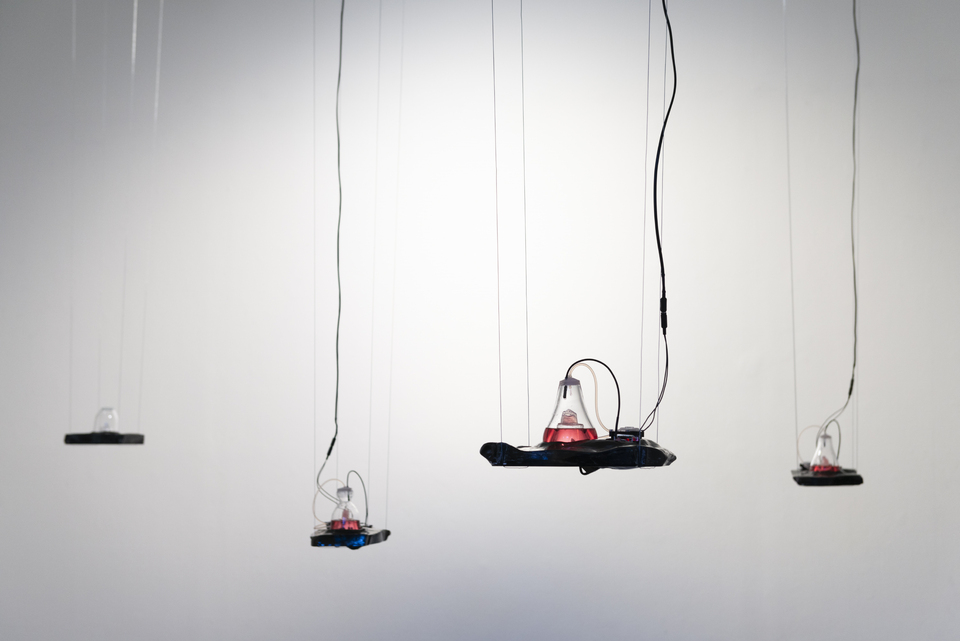 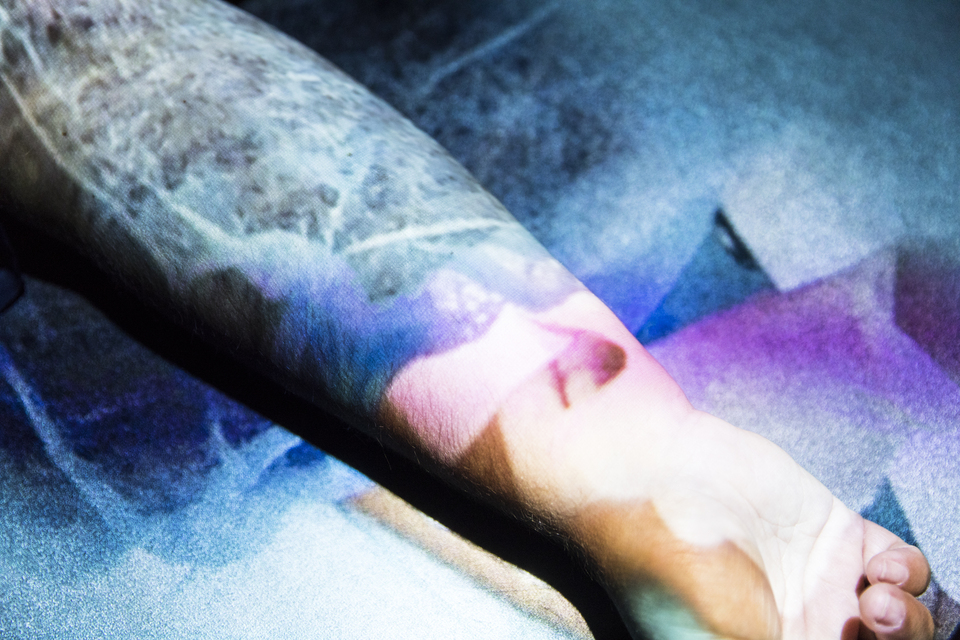 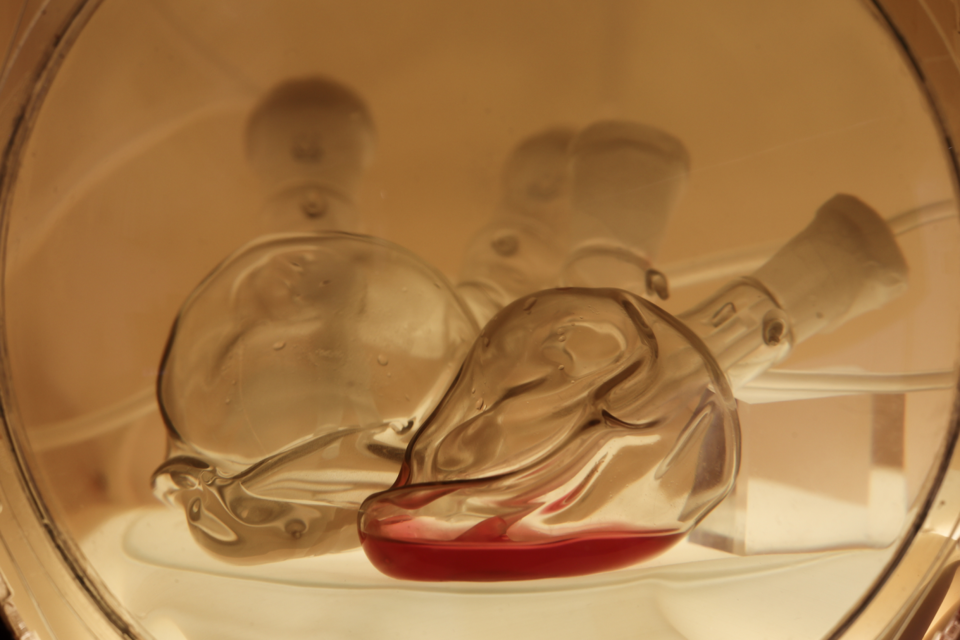 m/other becomings is an exhibition in two instalments and part of a larger multiyear collaboration among cultural organisations, artists, and thinkers and connect to a symposium which will take place 9–10 June at Aalto Design Factory.

m/other becomings takes a closer look at the im/possibilities of mothering, not as an essence, but as troubled practice and as a modest, utopian, and oftentimes exhausted precursor of hope. We want to ask what it means – and may come to mean – to make, to mend, to make space for kin despite and against the social reproduction of sameness and compliance, and the (bio)politics of gendered and racialized violence. m/other becomings also explores reproductive futures and asks if life sciences allow transforming and challenging our ideas and possibilities of reproduction and the maternal.

Anti-Marta is an installation exploring the limits of human individuality in the face of an increasingly biotech-based society. It represents the relationship between an artist and a scientist, but also the boundary between art and science, and the limits of our own identity. Marta and Luis, an artist and an immunologist, have a pact for life: mated, married, united. Their search for an artistic representation of such a pact led to the transplantation of skin grafts. In both cases, the outcome was a tension between their individualities and their bonding. The skin transplants were also rapidly rejected, given the immunity differences. Yet, in both cases the pact can live on. The immortal cell lines can co-exist in virtual space, where video projections of living cell cultures intersect in the installation. On the same note, the rejection of skin has led to the production of molecules (antibodies) that forever will be able to identify the other, like the acquisition of a sixth sense that can be visualized through the isolation of appropriate antibodies. Anti-Marta shows how we can bond with another and yet maintain a strong sense of identity. In Anti-Marta, it is not only a woman and a man who assert their relationship and identity, but also an artist and a scientist, who demonstrate the connection between the two disciplines while maintaining their uniqueness.

Marta de Menezes is a Portuguese artist with a degree in Fine Arts from the University in Lisbon, and a MSt in History of Art and Visual Culture from the University of Oxford. She has been exploring the interaction between Art and Biology, working in research laboratories demonstrating that new biological technologies, DNA, proteins, and live organisms can be used as an art medium. Her work has been presented internationally in exhibitions, articles, and lectures. Besides her work as an artist, de Menezes curated major international exhibitions. She is since 2005 artistic director of Ectopia – Experimental Art Laboratory and from 2009 onward director of Cultivamos Cultura – Association.

Pekko Vasantola: An attempt to keep my friends alive

An attempt to keep my friends alive is a series of living biosculptures. Material of the works is artificial tissue made of cells of my friends and family members. The works are not traditional portraits representing the subject by their looks, but portraits focusing on the materiality of their subjects. The portrayed people are used as material themselves. Vasantola collected the cells of his friends by using a non-invasive method, scraping the epithelial cells from their cheeks. After culturing the cells in the laboratory, Vasantola combined them with extra cellular matrix mimicking hydrogel ­– to form artificial tissue. This tissue, made of each depicted person, will be alive and growing for the duration of the exhibition. In this exhibition, the sculptures are paired with a video tutorial How to grow pieces of your friends?, teaching the viewer to repeat the process of extracting and culturing epithelial cells of a friend. Vasantola would like to thank Brinter Oy for collaboration and for letting him use a bioprinter manufactured by them. Vasantola would also like to thank The Arts Promotion Center, The Finnish Cultural Foundation and Kunstventures Oy for supporting his work.

Pekko Vasantola is a visual artist based in Helsinki, Finland. Common themes in his work include personal data, new technologies and portraiture. He often makes data-based portraits, which reflects on today’s technologically enhanced perception. Mediums he uses ranges from granite sculptures to AI software to cell culturing and bioprinting. He graduated from Turku Arts Academy in 2019. Currently he is finalizing his studies from Aalto University’s Master Program in Visual Cultures, Curating and Contemporary Art. Vasantola’s works have been shown in several exhibitions in Finland and abroad, including solo shows in Sculptor Gallery and Porvoo Kunsthalle, and group shows in Wäinö Aaltonen Museum of Art and Helsinki Kunsthalle.

The series Wombs meditates on sexuality and hormonal contraception from an environmental, more-than-human perspective. Wombs reclaims the importance of hormonal contraception and therapy. Sex steroids in hormonal contraceptives modulate human sexual organs to prevent pregnancy. Yet, the same molecules may trigger the endocrine system of other organisms. Wombs wonders how the progestine-based contraceptive I take may link my body to other, more-than-human bodies. By reclaiming vulnerability and toxic embodiment, Wombs prompts a critical rethinking of sexuality and contraception as a human-only experience enclosed in one’s own body. In W.02 and W.03, terrestrial slugs are hermaphroditic allies in the exploration of inner and outer ecologies of fleshy desire. Commonly considered pests to be exterminated, different slugs species display elaborate mating behaviours, such as hanging choreographies or shooting love darts into the partner’s body. Wombs interweaves queer ecologies and bioart and performance practice and takes on the feminist idea of leaky bodies – bodies that are never sealed and fully enclosed – and contextualises it in today’s surging environmental disruption. Wombs prompts to embrace vulnerability as a contemporary political and ethical gesture.

Margherita Pevere is an internationally acknowledged artist and researcher whose practice glides across biological arts and performance with a distinctive visceral signature.  Her inquiry hybridizes biotechnology, ecology, environmental politics, gender and death studies with to create arresting installations and performances that trail today's ecological complexity. Her body of work is a blooming garden crawling with genetically edited bacteria, cells, sex hormones, microbial biofilm, bovine blood, slugs, growing plants and decomposing remains. She would not be the artist she is today without the many collaborations across art, science and humanities. Together with Marco Donnarumma and Andrea Familari, she co-founded the artists' group Fronte Vacuo to realize performances made of bodies, symbionts, sounds, machines and images. She is member of the Finnish Bioart Society, of The Queer Death Studies Network and of The Posthumanities Hub. She is completing a PhD at Aalto University on biological arts and queer studies.

m/other becomings cultivates intergenerational and multispecies methodologies, making space for the investigation of domestic resistance practices and probing technologies of reproduction, resilience, and recuperation. The project has included various workshops, lectures and exhibitions in Denmark, Finland, Sweden, and online and it comes to a conclusion in spring 2022, with two exhibitions and a symposium, held in Helsinki and Espoo. It is a collaboration between Laboratory for Aesthetics and Ecology (DK), The Association for Arts and Mental Health (DK), Kultivator (SE), Art Lab Gnesta (SE) and Bioart Society (FI).