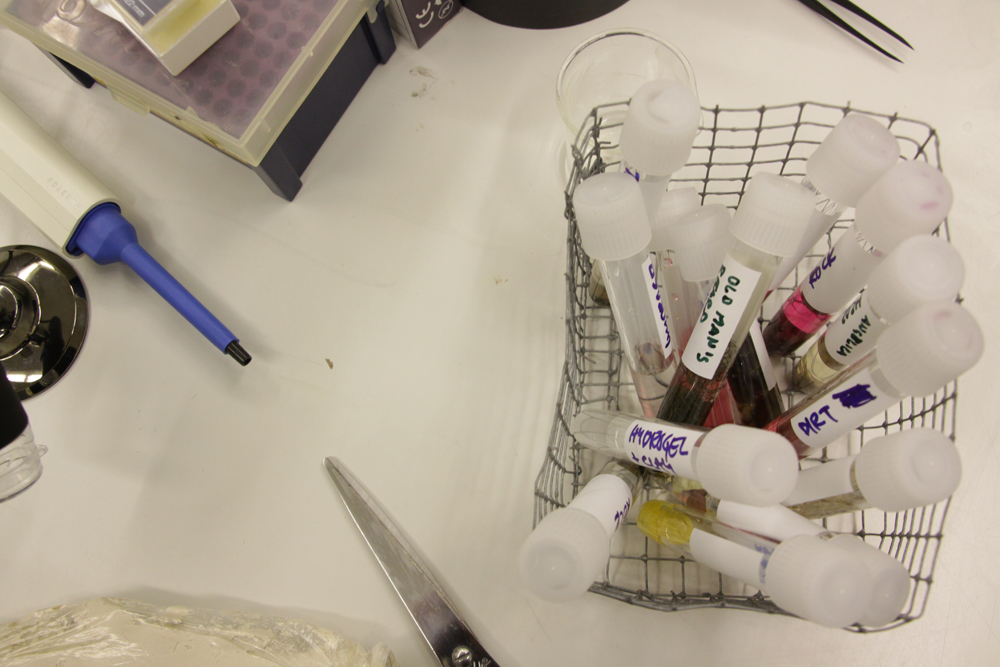 with Antti Tenetz, Corrie van Sice, Laura Beloff, Melissa Grant, Beatriz da Costa
takes place in the sub-Arctic nature, in the lab and in the study

There is a growing realisation among biologist that the substrate plays an important role in biological processes such as cell differentiation and development. Some argue that the Extracellular matrix (ECM) and the milieu are more significant than DNA in the development and processes of complex organisms. This is a major shift from the reductionist privileging of the database (the genome) towards a more complex application of context as a major driver in engaging with our understanding of life. We will collect materials form Kilpisjärvi and to try and transform them into different types of substrates/biomaterials for tissue growth, as an opening for a broader exploration concerning the cultural importance of the biological milieu.

Oron Catts
Oron Catts is an artist, researcher and curator whose work with the Tissue Culture and Art Project (which he founded in 1996 with Ionat Zurr) is part of the NY MoMA design collection and has been exhibited and presented internationally. In 2000 he co-founded SymbioticA, an artistic research laboratory housed within the School of Anatomy and Human Biology, The University of Western Australia. Under Oron’s leadership, SymbioticA has gone on to win the Prix Ars Electronica Golden Nica in Hybrid Art (2007) and became a Centre for Excellence in 2008. In 2009 Oron and Ionat were recognised by Thames & Hudson’s “60 Innovators Shaping our Creative Future” book in the category “Beyond Design”, and by Icon Magazine (UK) as one of the top 20 Designers, “making the future and transforming the way we work”. Oron has been a researcher at The University of Western Australia since 1996 and was a Research Fellow at the Tissue Engineering and Organ Fabrication Laboratory, Harvard Medical School, Massachusetts General Hospital, Boston from 2000-2001. He worked with numerous other bio-medical laboratories around the world. In 2007 he was a visiting Scholar at the Department of Art and Art History, Stanford University. He is currently undertaking a “Synthetic Atheistic” residency which is jointly funded by the National Science Foundation (USA) and the Engineering and Physical Sciences Research Council (UK) to exploring the impactions of synthetic Biology; and is a Visiting Professor of Design Interaction, Royal College of Arts, London. http://www.symbiotica.uwa.edu.au/

Ionat Zurr
An award winning artist and researcher, Zurr formed, together with Oron Catts, the Tissue Culture and Art Project. She has been an artist in residence in the School of Anatomy and Human Biology since 1996 and was central to the establishment of SymbioticA in 2000. Zurr, who received her PhD titled "Growing Semi-Living Art" from the Faculty of Architecture, Landscape and Visual Arts, is a core researcher and academic co-ordinator at SymbioticA. She is considered a pioneer in the field of biological arts and her work has been exhibited internationally. Zurr specialises in biological and digital imaging as well as video production. Zurr has studied art history, photography and media studies. She was a research fellow at the Tissue Engineering and Organ Fabrication Laboratory, Harvard Medical School from 2000-2001. She is currently a PhD candidate researching the ethical and epistemological implications of wet biology art practices.
http://www.symbiotica.uwa.edu.au/

Antti Tenetz
Antti Tenetz is equal parts artist and naturalist. He has worked and filmed throughout the North, from the Ice Sea to Siberia, and as far south as South Thailand and Greece. His works are at the crossroads of media-, bio- and urban arts with strong current of Interdisciplinary Sci/Art approach. In his works he combines mediums ranging from various tehcnnological platforms and materials to living nature. Tenetz has contributed exhibition designs, multimedia and documentaries to science and art exhibitions ranging in subject from arctic reindeer herders to interactive cityscapes. He is also actively participating as Vj in urban arts events. The work he is doing about the wild nature human and non-human relations goes far beyond all the usual clichés and the "green-hype" movement. His works have exhibited widely including Thessaloniki Contemporary art museum of Greece 2009, Academy of Fine Arts Katowice 2009 (e-mobilart program), Tromsø Kunstforening 2010, and Murmansk Art Museum 2010. Winner of three Finish national snow sculpting championships (1997 Gold, 2003 Bronze, 2005 Silver), Tenetz personifies a melding of the artistic and arctic.

Laura Beloff
With acclaimed international reputation as an artist and a researcher, Laura Beloffs artistic works can be described as peculiar wearable objects, participatory structures and networked installations. Her works deal with individuals in a globally networked world who are trying to adapt to a complex techno-organic reality and enhanced humans. Many of her wearable and mobile works are constructed to be used by audience. Beloff has exhibited widely in museums, galleries and media-art events in Europe and worldwide, f.e. in Vienna 2011, the Venice Biennale 2007, and in Brazil 2008. She is frequently lecturing about her research and practice in universities and various conferences. 2002-06 she was Professor for media arts at the Art Academy in Oslo (NO). 2007-11 she was awarded a five-year grant by the Finnish state. In 2009-2010 and in 2011 she has been Visiting Professor at The University of Applied Arts in Vienna (AT) and during the recent years a visiting lecturer at Aalto University, School of Art and Design. Currently she is working towards PhD within Planetary Collegium, University of Plymouth. More information on her works:
http://www.realitydisfunction.org

Melissa Grant
Melissa Grant is a lecturer in Biological Sciences in the School of Dentistry at the University of Birmingham, UK. Her research interests are in the use of data rich generating technologies, such as proteomics and genomics, to understand human health and disease. Most recently she has developed an interest in trying to combine these data to reveal systems biology solutions which show that many factors are important, especially the environment in which the measurements are taken. Aside from work, having recently completed two short courses in ceramics, she is exploring the use of biological samples in ceramics, particularly through glazes. Website:
http://melissagrantprofile.blogspot.com/

Beatriz da Costa
Beatriz da Costa is an interdisciplinary artist who works at the intersection of contemporary art, science, engineering and politics. Her work takes the form of public participatory interventions, locative media, conceptual tool building and critical writing. da Costa has also made frequent use of wetware in her projects and has recently become interested in the potential of interspecies co-production in promoting the responsible use of natural resources and environmental sustainability. Issues addressed in previous work include the politics of transgenic organisms, and the social repercussions of ubiquitous surveillance technologies. Through her work da Costa examines the role of the artist as a political actor engaged in technoscientific discourses. This topic is also addressed in a recently published anthology she co-edited with her colleague Kavita Philip entitled Tactical Biopolitics: Art, Activism, and Technoscience, (ed. Beatriz da Costa and Kavita Philip, MIT Press, 2008).
http://www.beatrizdacosta.net