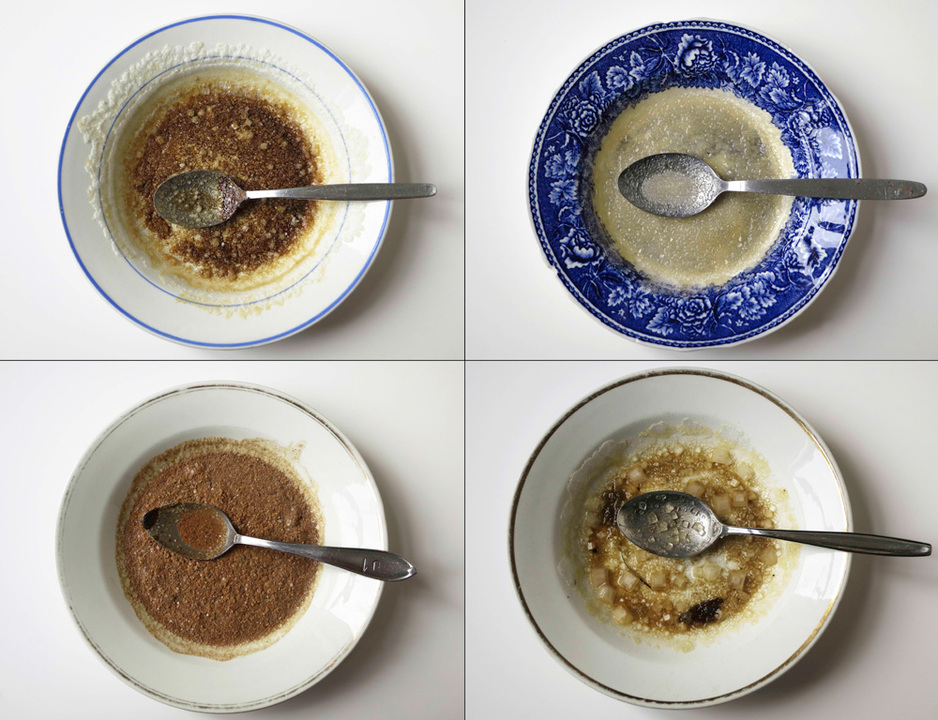 The Colour of Water and the Dissolved Organic Matter (DOM)

The Art of Cooking down the Baltic Sea

I have set a dining table with soups made from seawater. Each Soup du Jour or stock cube is prepared of one bucket (10 l) of seawater reduced by cooking. I collected the water samples during the summer 2012 from Harakka Island in front of Helsinki.

For the sake of comparisonhttp://bioartsociety.fi/ml_stage one Soup du Jour and one stock cube are cooked of seawater around Källskär Island in Åland. The pure white salt layer on the Källskär soup plate shows a clear difference to the turbid local soups coloured brown by the river Vantaa.

The dining table has a tablecloth printed with information of the temperaturehttp://bioartsociety.fi/ml_stage turbidity and salinity of seawater near Harakka Island. The statistics come from an ongoing water quality monitoring research and they are provided by courtesy of the City of Helsinki Environment Centre researcher Emil Vahtera.

During each month I collected round 40 liters of seawater and left it to evaporate in room’s temperature inside a picture frame. As a result of the processhttp://bioartsociety.fi/ml_stage the dehydrated salt crystals and algae on the picture plane represent the state of the seawater during the month in question. The salt paintings create a visual calendar that explores monthly variations in the quality of seawater.

I designed a simple instrument made of a clear acrylic box with a small digital camera inside. It captures simultaneous views under and over the water surface. In addition to the landscapehttp://bioartsociety.fi/ml_stage this split imaging technique reveals the colour of the underwater where a brownish shade indicates the amount of humus or organic matter in the water.

The Water Colour Scope could be used for a visual record of the environmental conditions following the course of water in the whole catchment’s area. A series of photographs (or videos) shot through this instrument demonstrates how the quality and the colour of water vary according to the landscape on the passage from ditches through rivers into the Baltic Sea.

Tuula Närhinen is a visual artist based in Helsinkihttp://bioartsociety.fi/ml_stage Finland. She has a studio on the Harakka Island outside Helsinki. The visual material in most of her works have their origin in the Harakka Island's nature.

"Images derived from scientific investigation are the core of Närhinen’s art along with a dry sense of humor. She is an investigative artist, inventive and methodical. Her works are installations that consist of series of photographs drawings or sculptures. She has built cameras that produce images of what she imagines the world looks to a fly or a bear; developed methods for letting trees trace the shape of wind on their branches and found techniques for using cold winter air to create patterns on paper and glass. Homemade instruments and a documentation of the working method are important elements of her works. Her topics are landscape, natural phenomena and environmental issues." writes Paul Kahn in NEWmagazine.