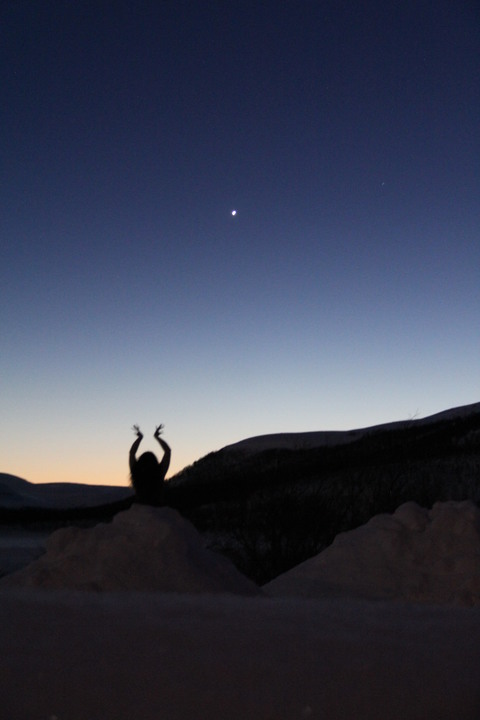 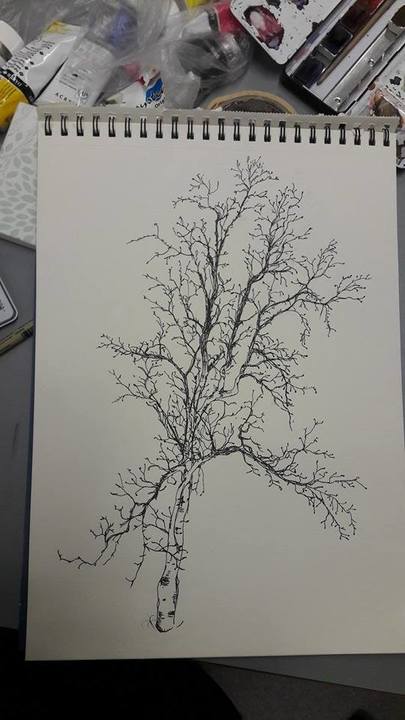 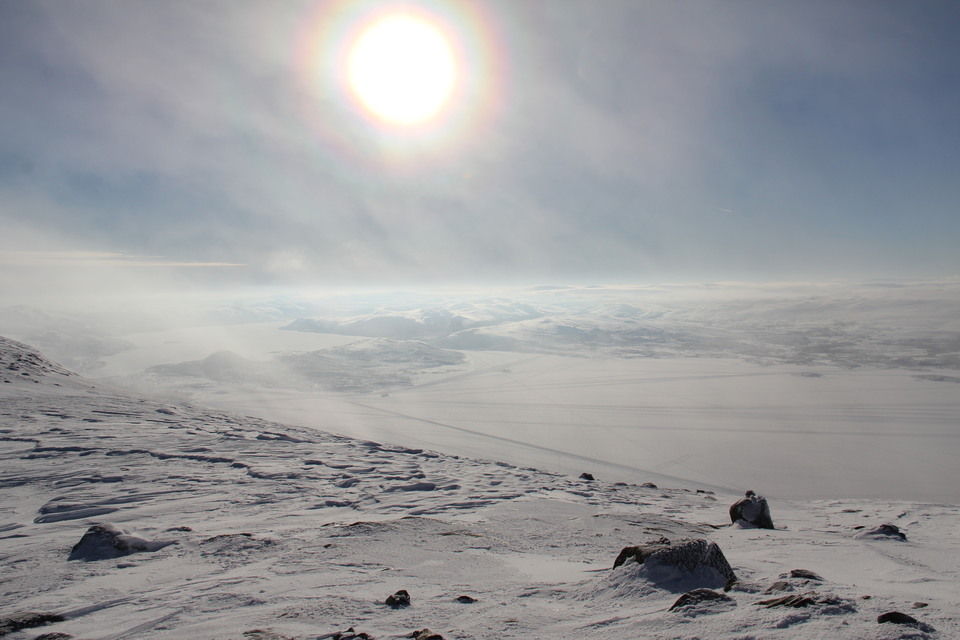 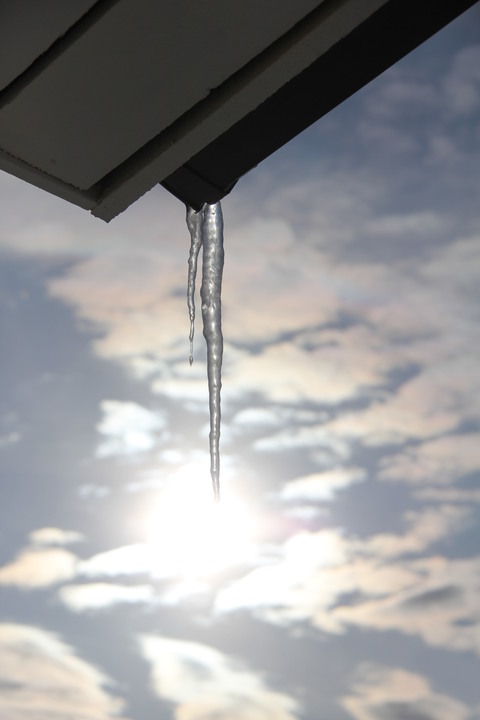 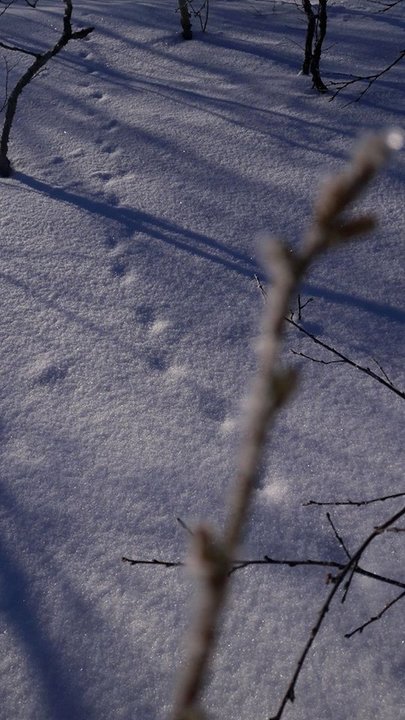 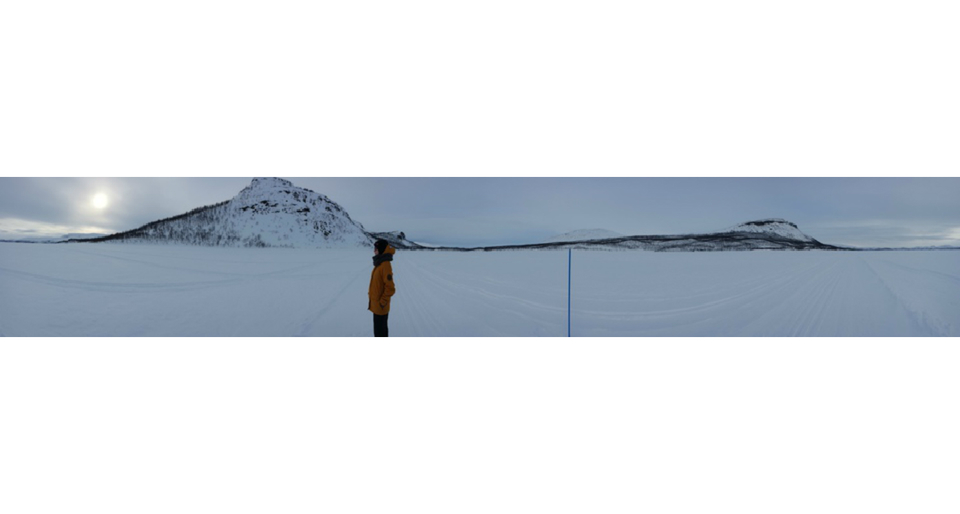 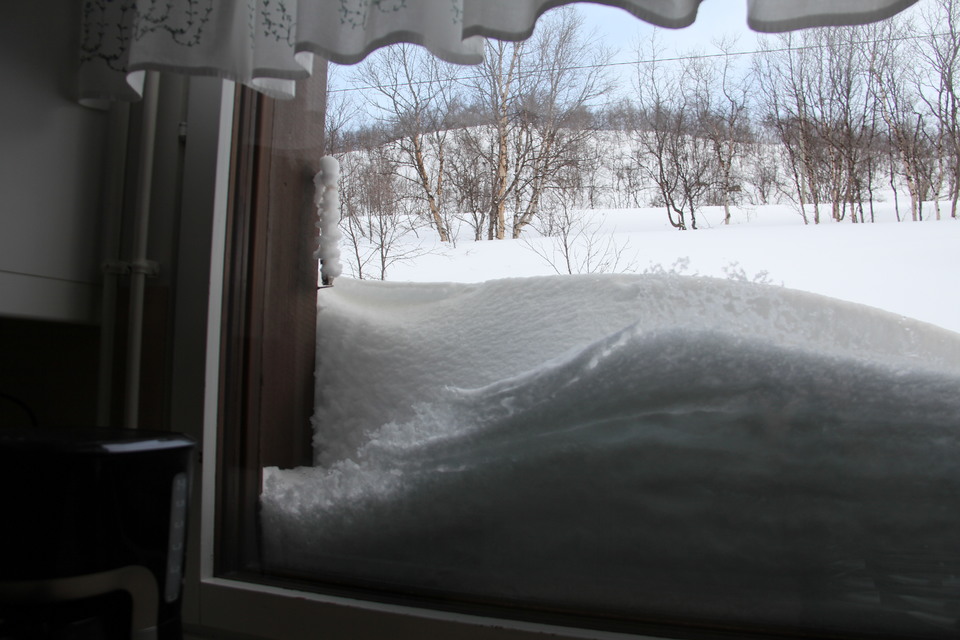 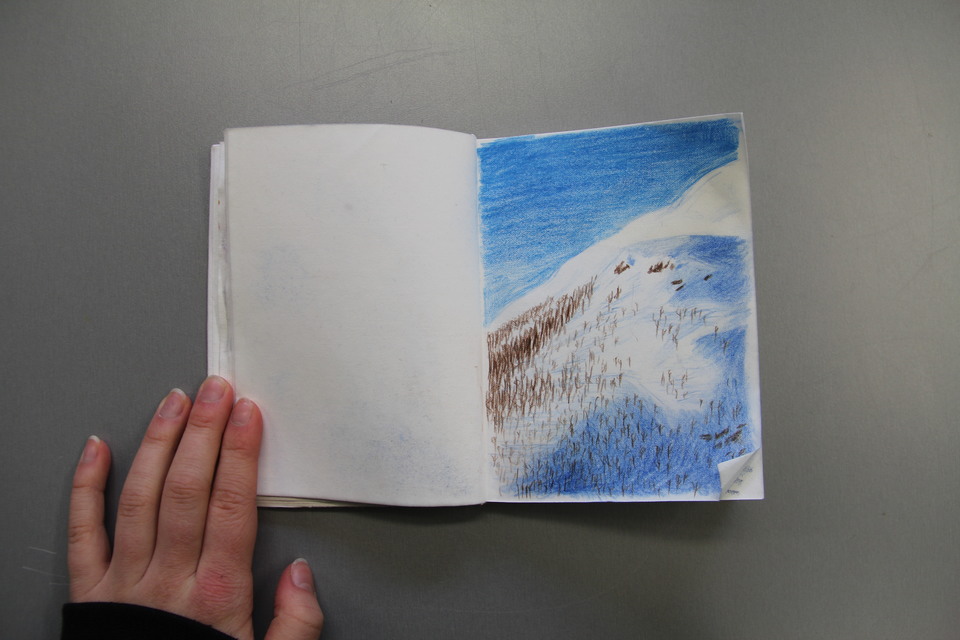 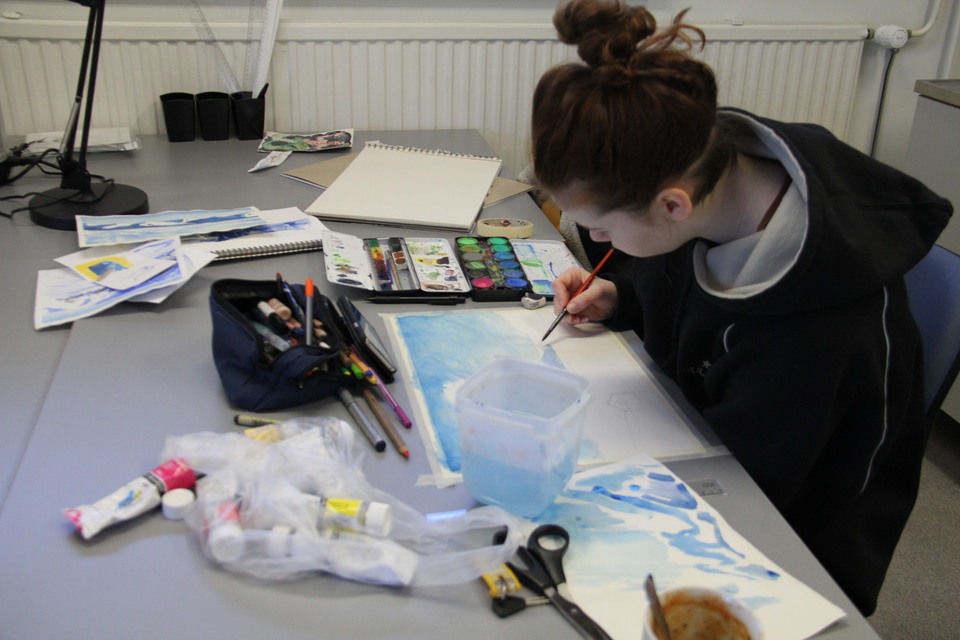 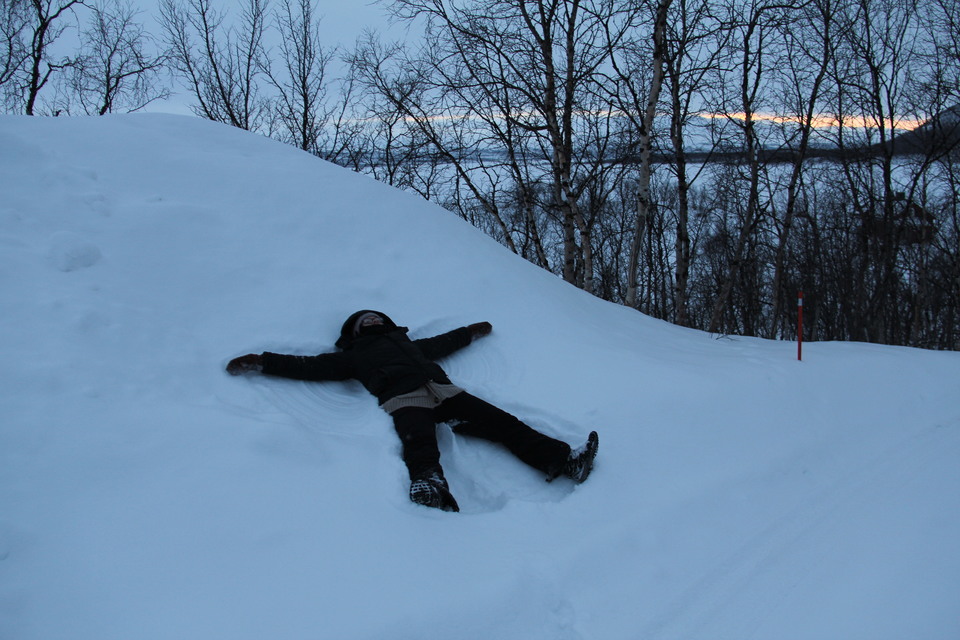 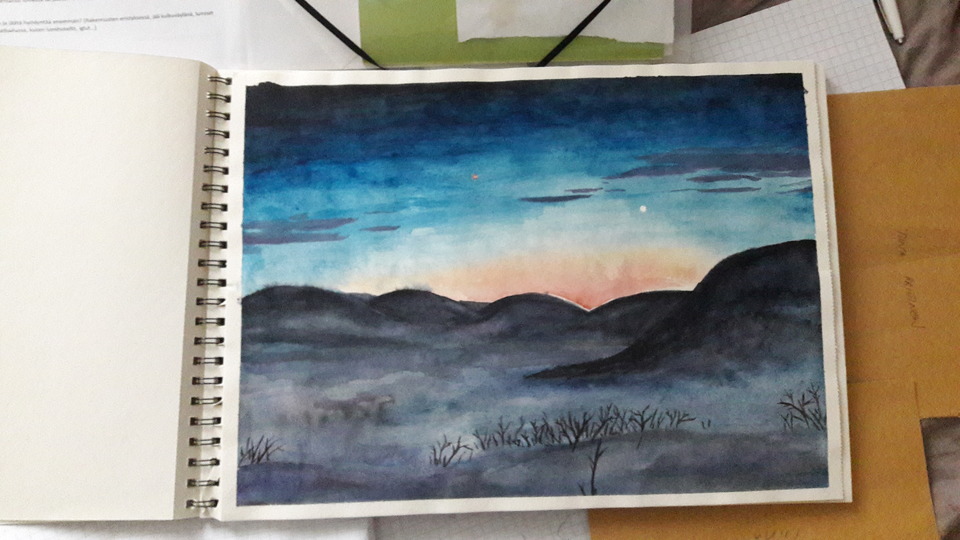 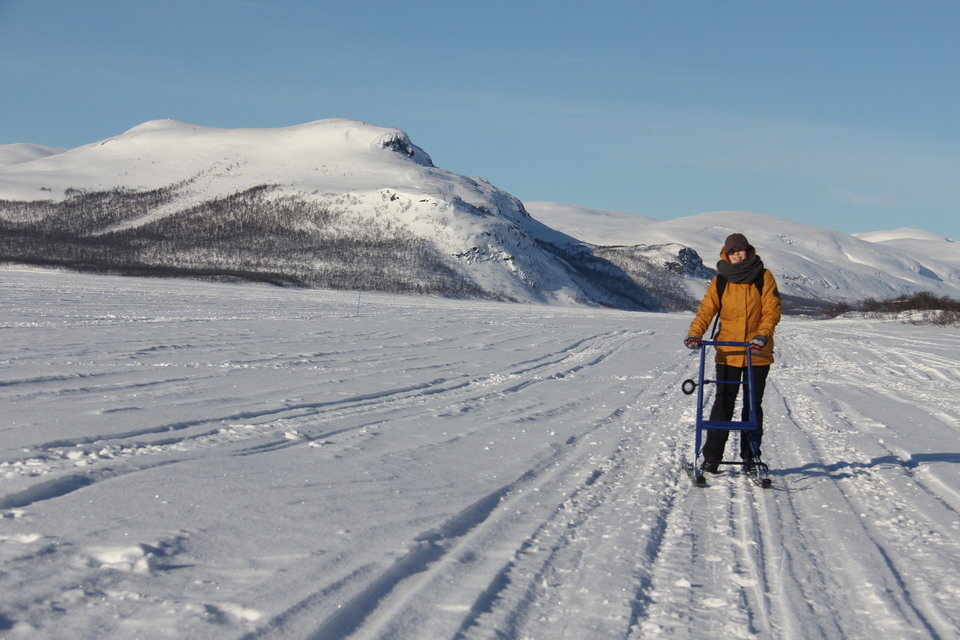 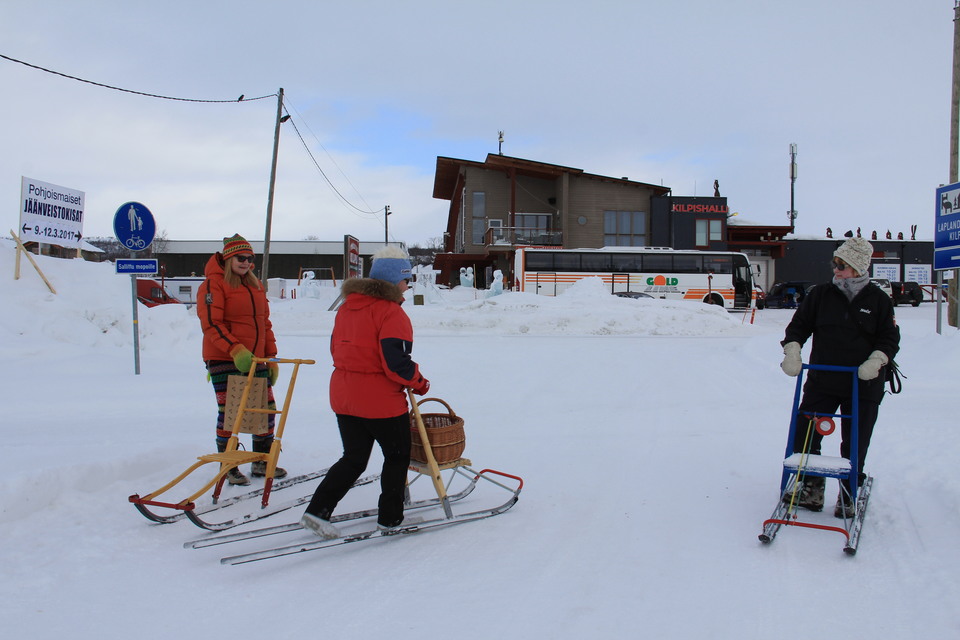 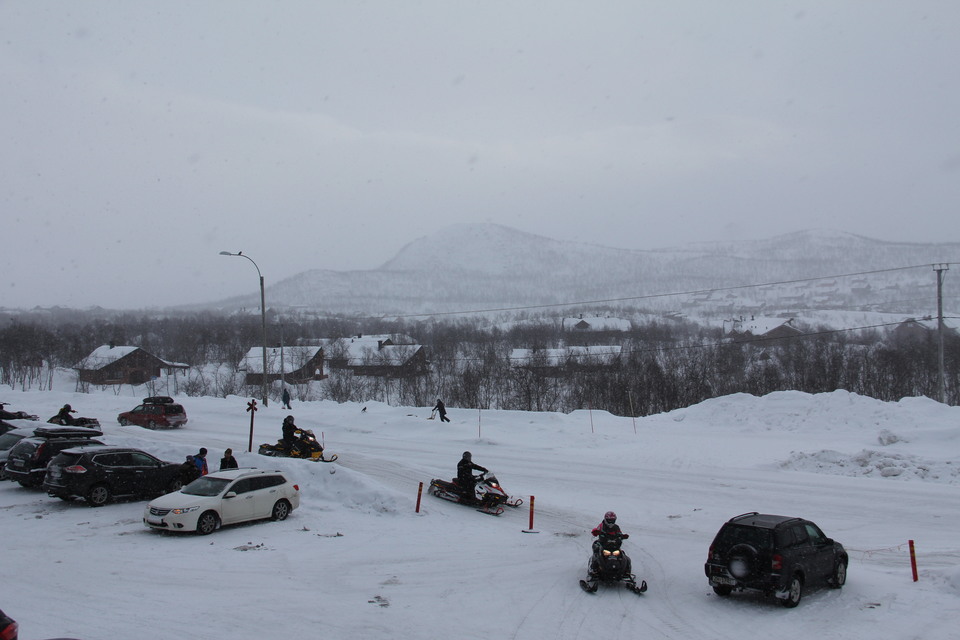 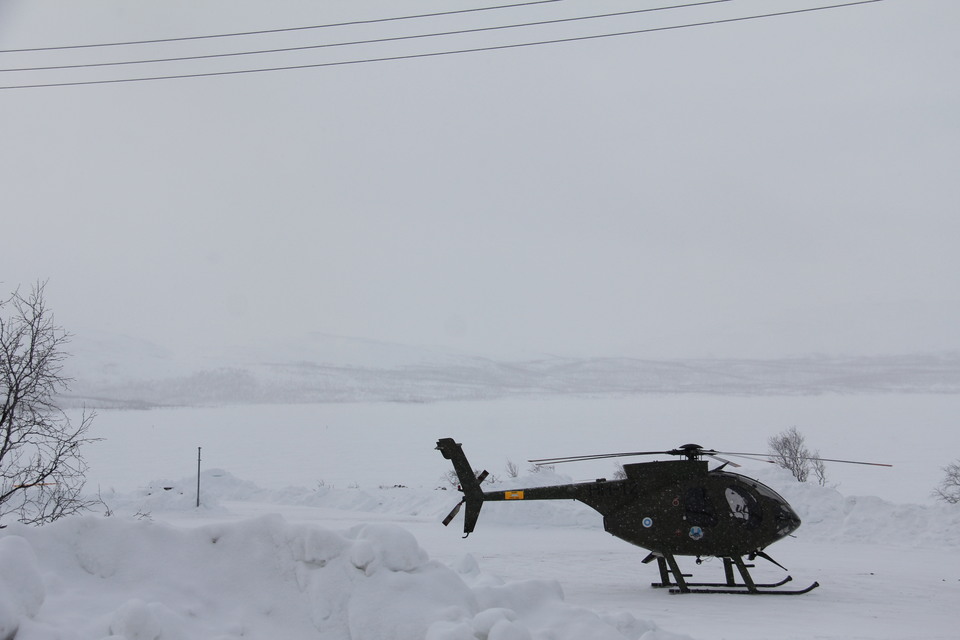 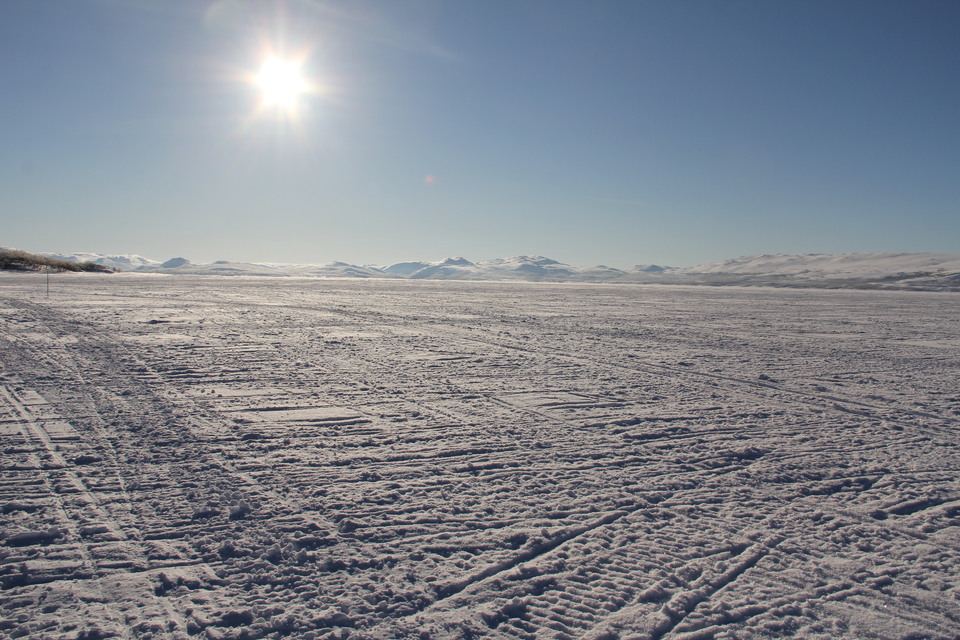 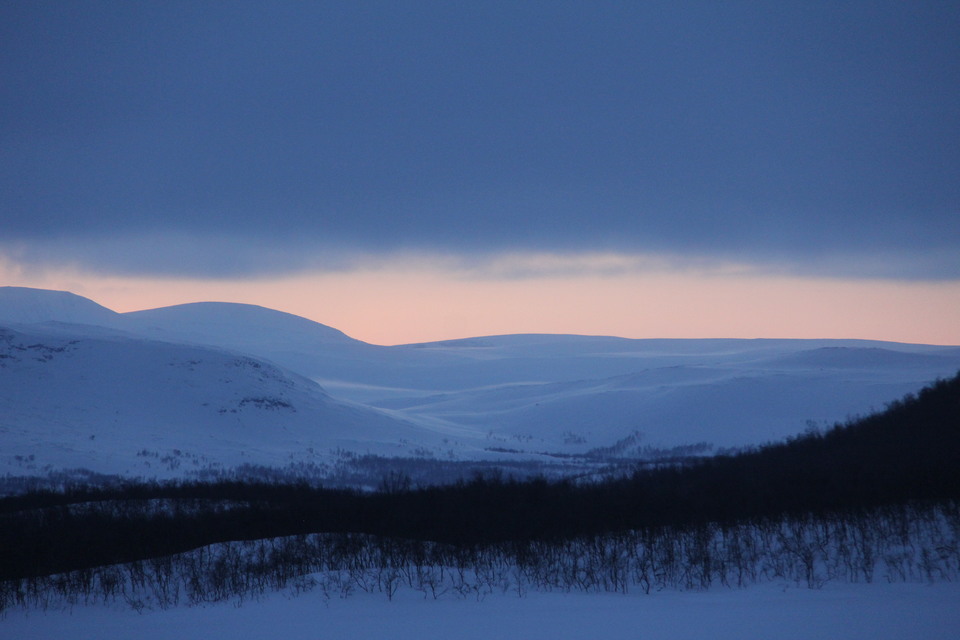 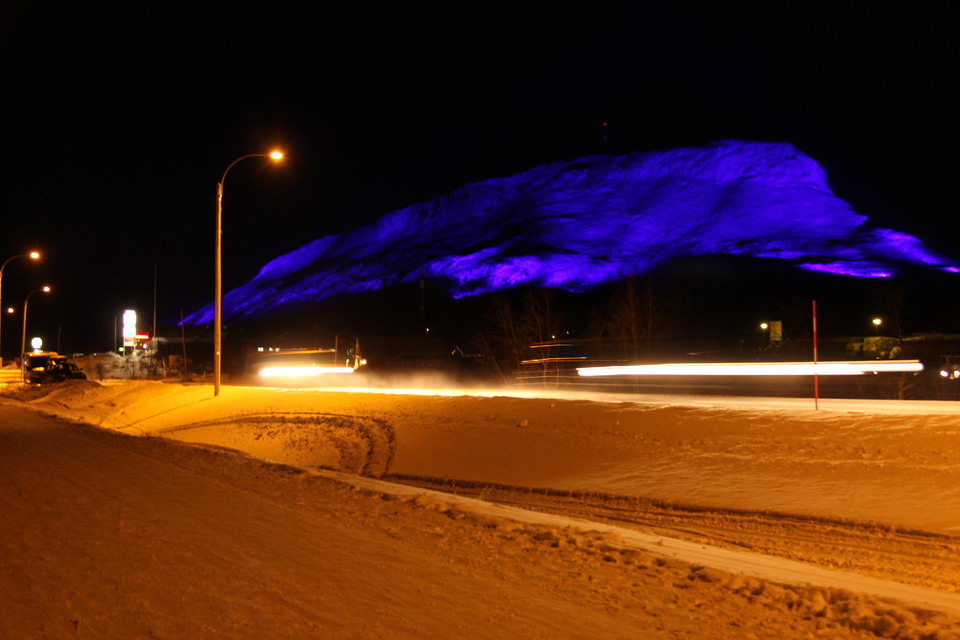 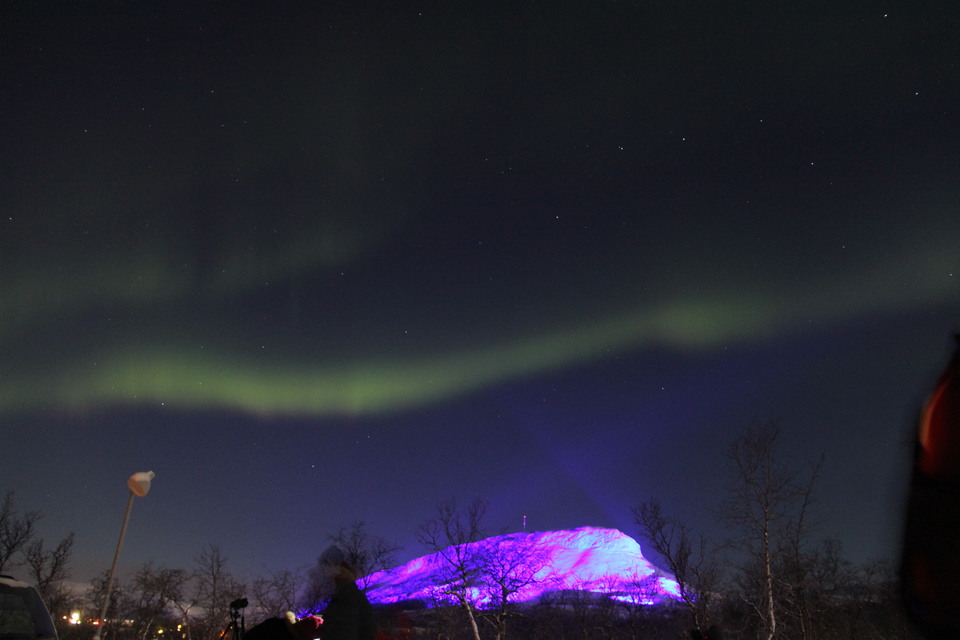 In Between, in Kilpisjärvi
posted by Tiina Prittinen on 12 May 2018

In Between, in Kilpisjärvi

In flamenco, the dancer is torn between the sky and the ground: the earth pulls you down and you stomp and struggle with your feet, and with your hands, you reach further to the light. The fundamental gestures are the same as the birches in the arctic mountain sides have: the arctic roughness torment the plant and restrain fast growth, but the leaves burst open to greet the sun despite of all the strains. It is also us, humans, that struggle between strains and oppositions that the world and society constantly throw at us. We have to learn to oppose the conditions, when our whole being is threatened, but also to embrace the light, empathy, even if it is merely fading and distant.

We experienced the Ars Bioarctica residency when it was full of crystal light, when the winter bent towards spring. The austere but beautiful winter environment of Kilpisjärvi village, in sub-arctic Finland, is close to the boarders, and fells, of Sweden and Norway. We were spoilt with unimaginable variations in light, landscape and weather. We worked as a team of mother and daughter, experiencing the exceptional nature and landscape together. Walking, watching and reaching towards the athmosphere of the place, we noticed all things small and big around us. We worked together with photographs, and also separately with our individual interests. Unna worked very diligently with drafts, paintings and drawings. I had writings and ideas that I worked on. I was inspired to start building a new working method.

The proportions and scales of the landscape in Kilpisjärvi are almost uncomprehensible for a visitor. We heard the deep ice noises, felt the exhaustion of walking, falling and sliding in the snow, and we felt the joy of abundances of snow, and celebrated the clear air and the amazing changing colours around us. Together the sun, the wind and the cold tried to do their sub-arctic work on the tiny patches of our faces that were not covered. At times snow and coldness were more pleasant through the lense of the camera than in reality. The animals were somewhere, but only their steps on the snow were visible, mainly fox traces.

The world is open in Kilpisjärvi, the people are just moving microscopic peas in the cup of the valley. At night the snowmobile lights seem big and disturbing, but then the Northern lights create a ceiling and new proportions. It is safe and warm to be inside at night when it really starts snowing.

Not only the slowly growing dark birches against the snow, but all of the environment is full of contrasts. When we reached the top area of Saana we were suddenly in the middle of a mountain cloud. The wind was ruthless, and taking photographs needed to be in quick pulses, because fingers felt numb after just a couple of seconds. But the cloud was amazing, and so was the view filtering through it. The stream of the cloud moved and turned direction just where we stood.

About at the halfway of our visit, Unna was very into her own visual work, but I had the curiosity to ask people about the surroundings and find out more on the mentalities and social aspects. It may have been a mistake because of the disorientation from the natural phenomena, but nevertheless an activity that had to be done, and overall, work that should be ongoing in the circumpolar areas systematically, also in Finland. I met some local people and visitors, some of which I could interview longer and contact later.

Weekends are busy at the village center, food and gasoline are in most people's shopping list. People come for the cheaper prices, an arrangement that is common at man-made borders. Norwegian turism is said to bring problems: a lot of the peaceful village life is lost and wild snowmobile driving harms the nature and reindeer herding. The attitude of some people during the weekend was not nice: throwing bones on the shop yard and on the road, or snow scootering up and down the sides of mountains, treating them as any other practicing track for motor vehicles.

Interviewing people made me realise, how similar problems occur in all of Finland. Idea of the special Lapland does not reach political decisions, and mentalities are built on old, ecologically unsound structures. Different national developments and geopolitical tensions are visible also in Kilpisjärvi region. The military had a big rehearsal going on in Lapland during our stay. The nation states are practicing politics that do not consider the sensibility of arctic nature – when something is unbalanced, it takes really long time to recover. Also, many northern municipalities are making decisions based on material values. The vulnerability of the nature is recognized to a certain extent in all interest groups, but there are many questions unresolved also in Kilpisjärvi village and Enontekiö municipality; what to protect in nature and culture.

Kilpisjärvi is still a priviledged place, in spite of the multiple scars in the landscape. The place has strength that cannot be explained.

My visit alone in December offered striking opposites. The dawn light turned to dusk relatively fast. You had to be ready for catching the sunbeams. There were surprisingly many, new bright colours that appeared all around, despite of the general idea of dark polar winter.

In the event of the celebration of the nation of Finland's 100th birthday, Kilpisjärvi was amazing all day. But not because of the man-made light effects that were thrown towards Saana fell. The forceful, fluorecent lights could not compete with the natural theatre of lights that the place always has had. The pink and yellow burning polar sunlight from behind the mountains, the full super moon in the daylight and then the nighttime hues in the sky, the northern lights, and their green dancing waves! How could any human think they could compete with all that? I did not want to think the Finnish and Sami people as opposites, but I saw only Sami colours in the nature, and the Finnish ”blue” mountain that people looked at, was not lake blue to me, but eye-aching purple. Due to the nature of the light technique, it proved too difficult for most of the hundreds of people to save blue colour in photographs. Instead there is a pink and white Saana in most Finnish independence day photos. And the image of the mountain was sold for the benefit of just a couple of people. It was not the first time I saw people turning their backs on true beauty and worth.

But still, when people sleep, the arctic mountains rise and dance.