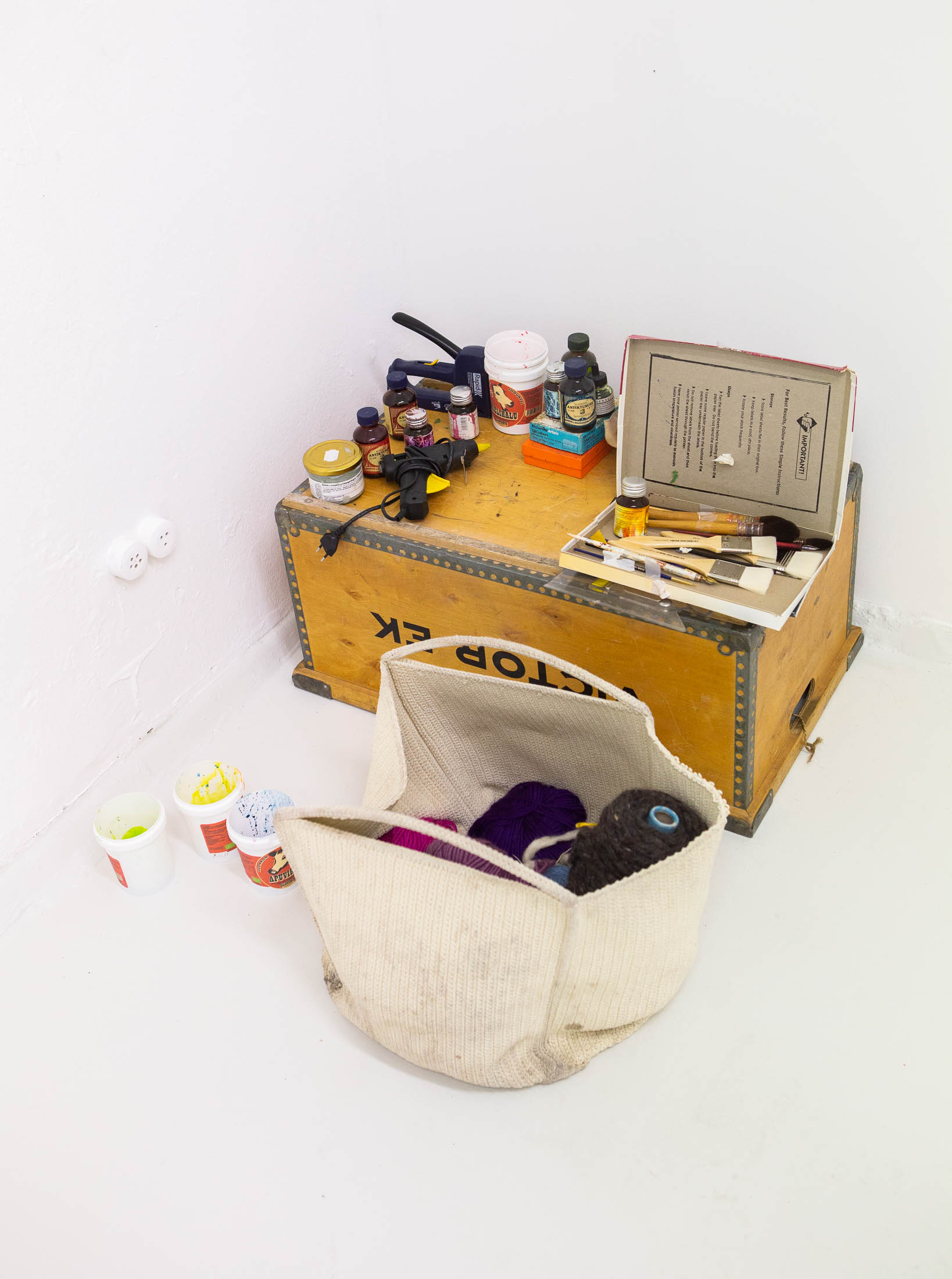 After we had decided that I will do the residency at SOLU, on my first visit to SOLU, I could not smell much anything. It was middle of winter, the heating was on, and it was very dry and warm inside SOLU.

I was worried that I might not pick up any smells in the rooms.

The second time, a few days later, there was the meeting of the Media Art Network. Half the people walked in to the spaces from the main entrance (in the street corner), and the other half walked in through the office room, that has a separate entrance. It was snowing and wet outside. People carried the humidity inside on their shoes. The doors kept being opened and closed.

It seems that immediately as this humid air and wetness fell on the carpet at the main entrance and at the steps in the office entrance, mould awoke and emanated its distinct smells to my nostrils.

The heating in winter, by electricity, or by central heating systems, causes its distinct sense of air, not a smell, but a feeling that I get around my face, nose especially, and eventually on my lips. It feels like there are small electric shocks circulating in the room. But they never discharge, just keep tickling in a scratchy sort of way. 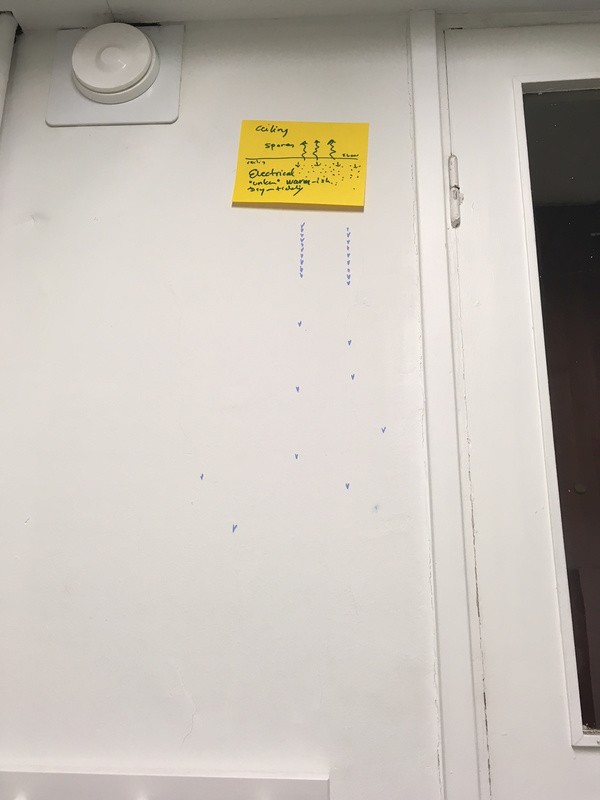 On the day of the Media Art meeting, the office room:

Observation
On the left hand side of the steps (seen from inside, facing door) that corner had a musty smell of mould growth. It rose slowly upwards.

At the same time, the air in the middle of the room was still prickly with the warm dry, electric air.

It was accompanied with a whirring, buzzing electrical illumination and head-ache-y radiation from the neon light lamps.

It felt like in the middle of the room, there was floating around an electric cloud zig zagging in a criss cross flowing wave. The cloud was suspended between energies coming from both the floor, and the ceiling. It kept being disturbed by the neon light, that seemed to become light blue darts whizzing down from the ceiling. It kept being lifted up by the musty dark green and brown, and lighter green, smells of moulds. The dry heat pierced it from its sides. 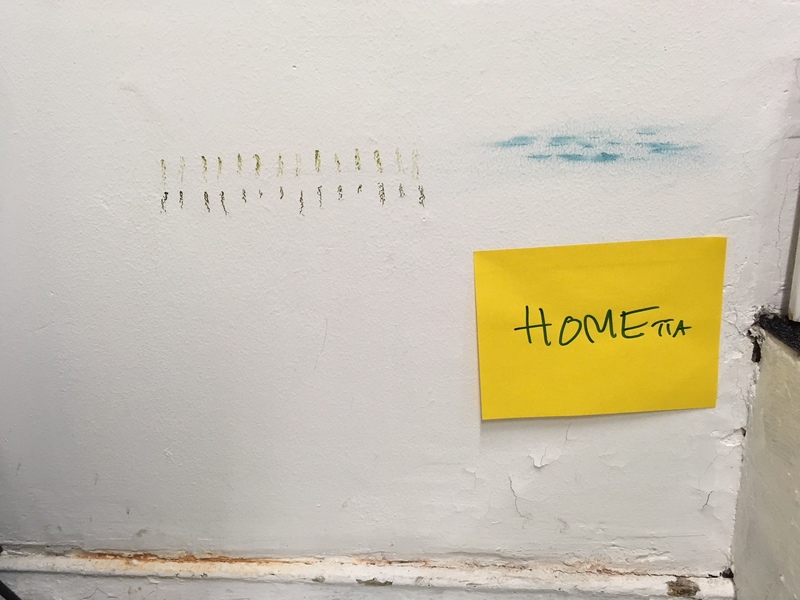 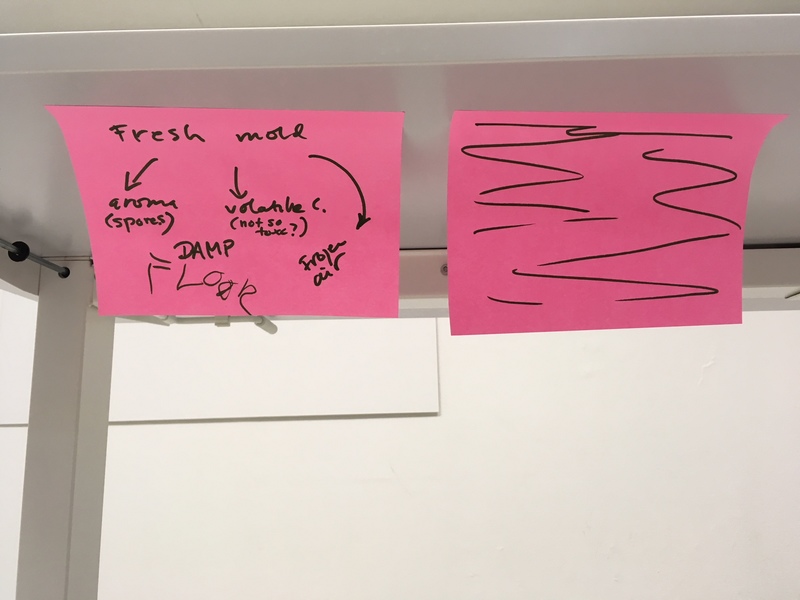 Execution of work
I started to look for a way to give this experience a form by first seeing the colors, and then the movements.
I made my first sketch on my note, to mark the space. 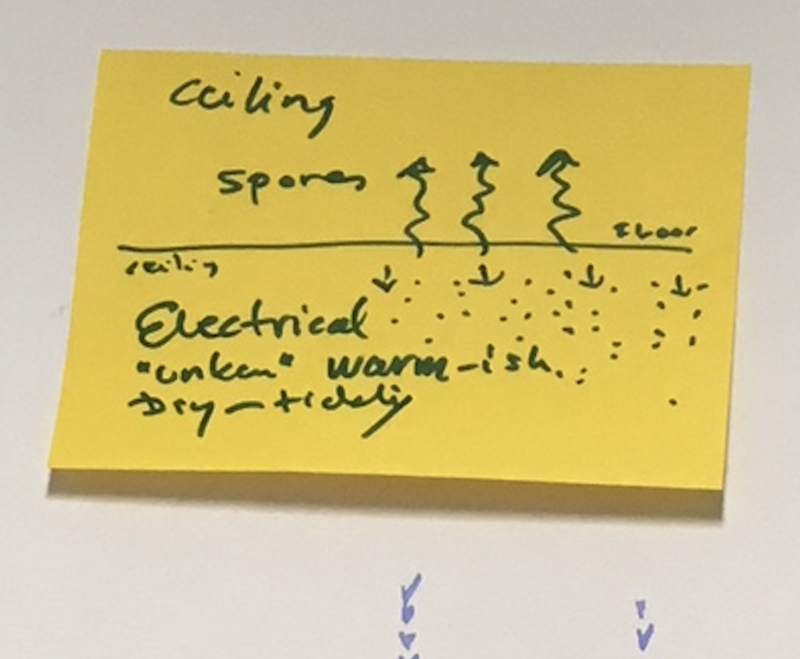 Then I looked for materials. At a shop I found a light blue cotton yarn. The materiality of the cotton was dry, chalky, and the light blue had a very distinct, set/settled, feel to it. Beyond opaque. You could touch the blue itself. This quality of the blueness of the yarn felt like the electric darts - slightly cooled down - coming from the neon light.

Then I found darker blue wool yarn. Here the materiality gave the color a feel of velocity, slipperiness, liquidity. This felt like the combination of fresh air, humidity and little bit of mould, pushing into the electric energy.

I have yet to find the dry heat. A yellowish thing. Chalky, but more pricklt or sting-y, as I call it in the note. It is not stingy as in someone un-generous, but something that stings, like a bee.

I have already started to work with the chalky and dark blu. I made a mistake, and could not unravel the chalky blue skein. It ended up a flat cross-wave, that correspond to the shape and movement of the cloud in the room. I stitched dark blue into it.

Today, I will prop it with thick wire cables, then suspend and expand it with more dark blue. 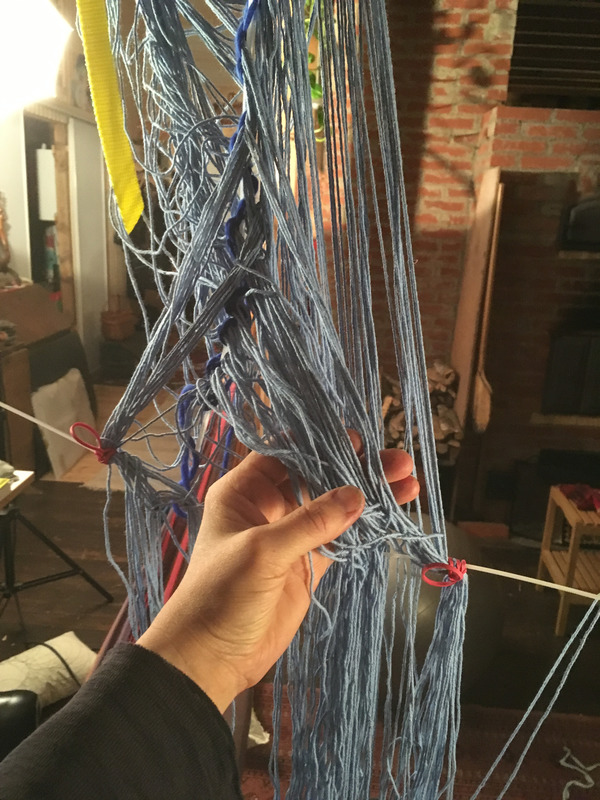 20.02.19
I have suspended the work and arranged it in a way that suggests its three-dimensionality. It looks like an evening gown for a skeleton.

This morning I started to build up a dark blue polyester “spine on it, to start bring it out of its flatness. I have my doubts. The chalky blue yarn-mess (tilted skein, and again) is so un-yield-y (unwieldy) and loose at the same time. Might it not be better to start with something entirely separate?

The object annoys me and tires me. But maybe that is good. It calls for me to do something. I will wait and see.

Observation
I walked around in the room for some time. Sniffed, drew in air the same way a dog does, many small whiffs quickly one after another, to condense any smelly molecules into my nose.

I picked up a slight scent of something at this wall. t seemed to become denser going up. I placed the ladder here, and climbed up. My head close to the protruding box, I was able to get a more defined sense of the smell. It smelled like an old smell, of homes. Sebum, that is, grease of human skin. Not of old people, but of peoples sebum of old, having been there (in the air ventilation system? or wall) for decades and accumulating for decades.

and worked on my computer for a hour or so. 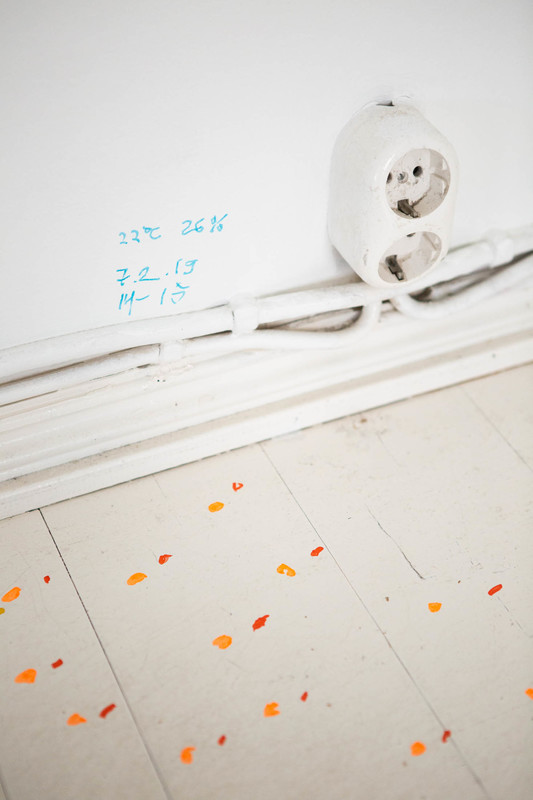 After this session, I felt my lips and cheeks burn. This was not the sebum, but something else.

This is a familiar sensation. It varies a little depending on what is in the room. There was no smell that I was aware. It can be a sensation due to dryness of air, combined with something toxic, such as mycotoxin, or perhaps some volatile compound (solvents, derivatives of mineral oil, like bitumen). If there is a volatile compound or a mycotoxin, if I wait a couple of more hours, I will develop a feeling in my chest of something cool, yet astringent in my lungs.

The burning sensation goes to the tip of my tongue, and eventually to the roof of my mouth.

If I stay longer than four hours, usually I will end up with a migraine headache that may last days.

My first impression of the burning sensation is vermillion red.

The volatile flashes in variations of light blue and lavender. Sometimes a light greenish color.
These are very scary. They feel demonic. They feel like they can pierce and slice my lungs, my body.

The headache variation feels like black and obtuse/impenetrable, yet void at the same time. It is a desperate space. Nothing can move.

Execution of work
Where I had been sitting and felt the burning, I marked the floor starting to the right hand side of me. I first set the marking with red dots. But I felt that the red has a motility, a direction that is not only red. I added the warm yellow dot. The red dots move out of the spot of my right hand side to cover the area where I sat - dispersing a bit as it moves to the left in a semi-circle. It felt like there was a burning center right in my right cheek, and from there the burning moved across. The yellow dots follow, moving further away from the red dots as the dots disperse. This gave the red-yellow dots cloud a dynamic direction that I felt expressed the volatility, anxiety and degree of aggressiveness of the sensation.

On the wall I smelled the sebum, emanating from the protruding box in the ceiling. It came down in chunks, monotone, dull, and obtuse. Like medium beige bars. Some of it was still alive and flying around, but most of it was dead and unwilling. I drew the dead parts with a ruler and a slightly darker ton. The parts that still had something live in them (microbes, most likely) were a bit brighter, yellower, and moved about as small square chunks, among a few red and yellow dots from the floor. A hint of mould (green), in some short instances. There was also something else, an energy moving about, that was easier to breathe, light yellow fluid, but I could not define it much more. Maybe it was not a smell at all? 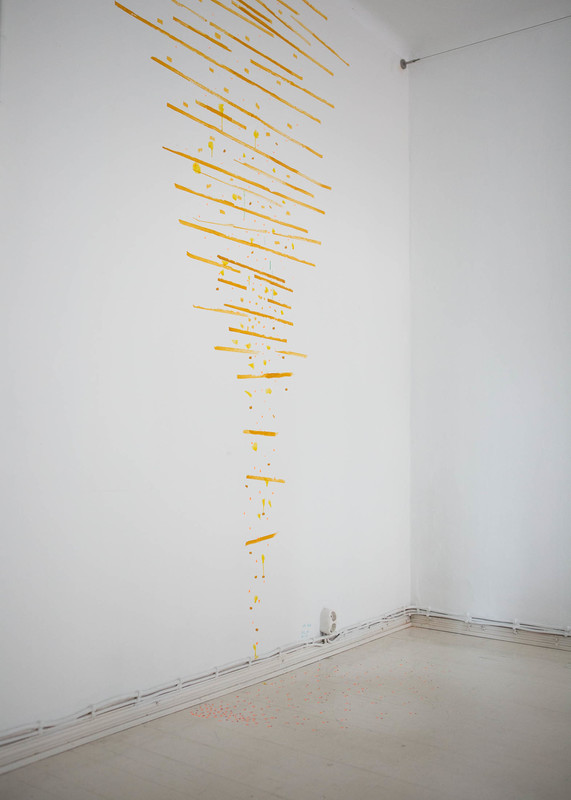 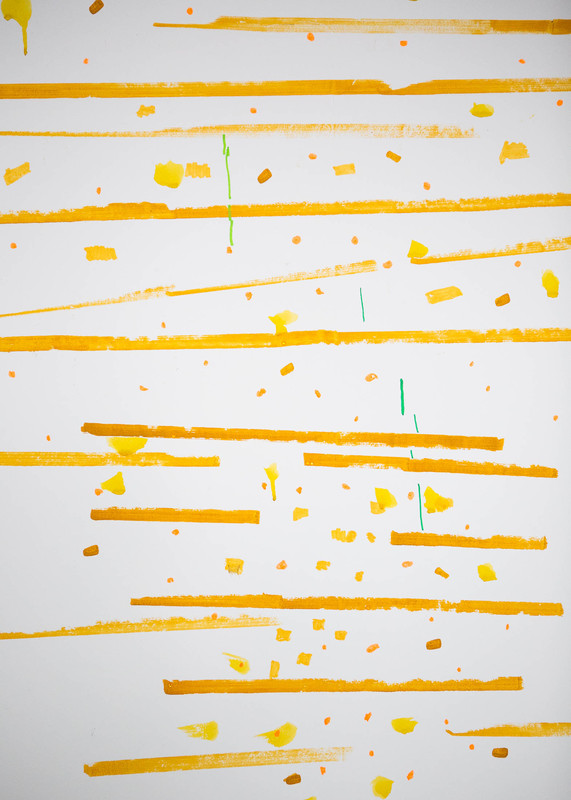 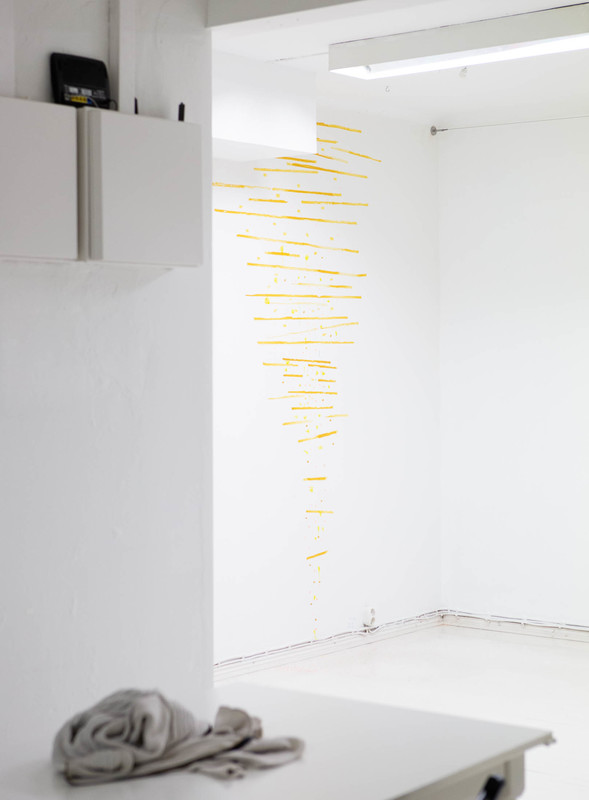 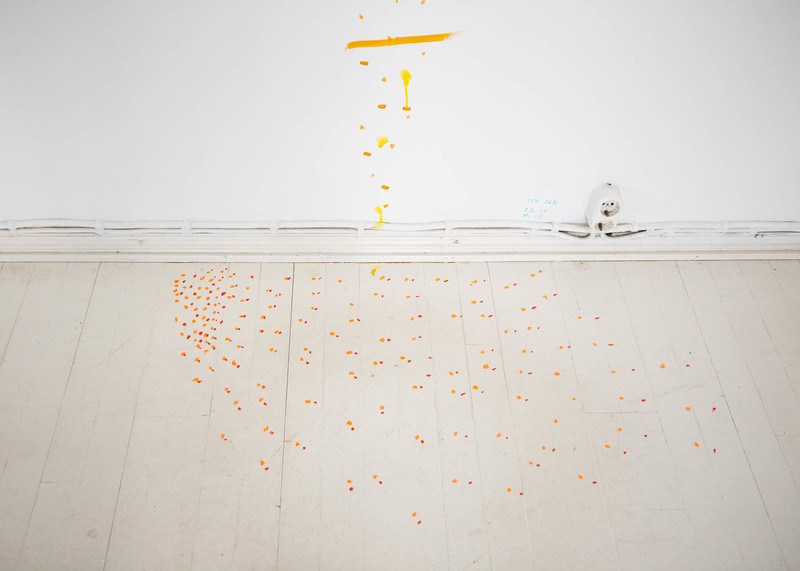