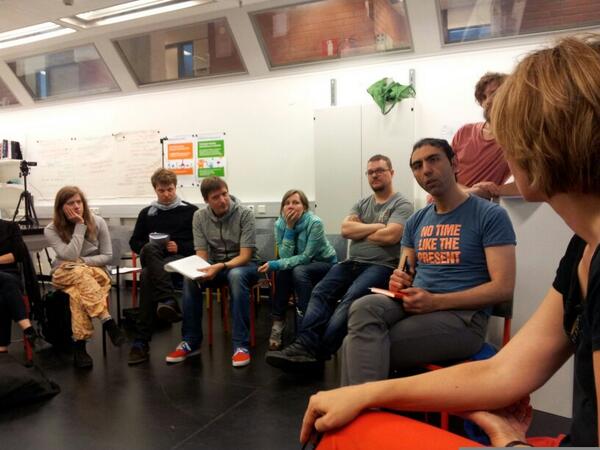 Philosophical questions towards SynBio
posted by sarah on 29 January 2016

After the break Tarja Knuuttila delivered a lecture which traced the epistemology of models. Models are mathematical, oftentimes statistical, constructs of a domain being investigated. They help rationalise (for want of a better word) that which is being studied or synthesised, aiding in predictions about a systems behaviour when certain starting parameters are changed. The use of models is particularly relevant to Synthetic Biology - the modelling of a systems behaviour for predictive and optimising purposes is the purvey of the sister discipline of Systems Biology. Systems Biology is predicated on the power of models and simulations (rarely are the two mutually exclusive) to aid the progress of empirical knowledge. More importantly, it is the combination of modelling with recombinant biology that distinguishes Synthetic Biology from the efforts of genetic engineering.

one of 3000 visions of the Whole Cell Viz cell simulation

Knuuttila's at times dense presentation was both informative and thought provoking. The Goodwin Model (describing the oscillations of Circadian Rhythms) was one of the first instances of a form of abstraction native to one domain (in this case, it's unclear if physics, cybernetics, or electrical engineering have the ultimate claim to fame) was applied to the molecular mechanisms within an organism's individual cells. Goodwin was motivated in his efforts by his desire for a statistical explanation for the mechanism for biology - a domain of mathematics that continues to exert huge influence on the progress and movement of the field of molecular, computational and synthetic biology. Knuuttila's presentation illustrated that scientists often possess the most humility when the use of models was concerned. And yet her presentation illustrated that this knowledge can be specialised - physicists usually undertake the modelling exercise. The unnamed concern has to be - is the model ever taken for a rule of thumb take on reality? Do engineers satisfice with models in a manner not dissimilar to cargo culting? A lot of the material underscored the themes signalled earlier by Catts - and indelibly articulated by fictional contrarian Ian Malcolm - "God help us, we're in the hands of engineers."

Synthetic biology was born with the broad goal of engineering or ‘wiring’ biological circuitry ... for manifesting logical forms of cellular control. [source]

An interesting notion emerged on the scientific use of fiction. Here, Knuuttila draws from Elowitz in stressing that it is through design that you provoke new questions which couldn't had been envisaged by simply analysing the natural systems.

In the subsequent discussion Orkhan offered that there may be other paradigms, 'model free' as it were. BioBricks (the repository around which the iGEM industry has grown) could be considered in such a way - the domain is explored in an application driven manner. This can be analogously comprehended with reference to the history of aviation - engineers could get the jet plane into the air successfully long before they had a model of propulsion and thermodynamics that accurately accounted for why it worked.