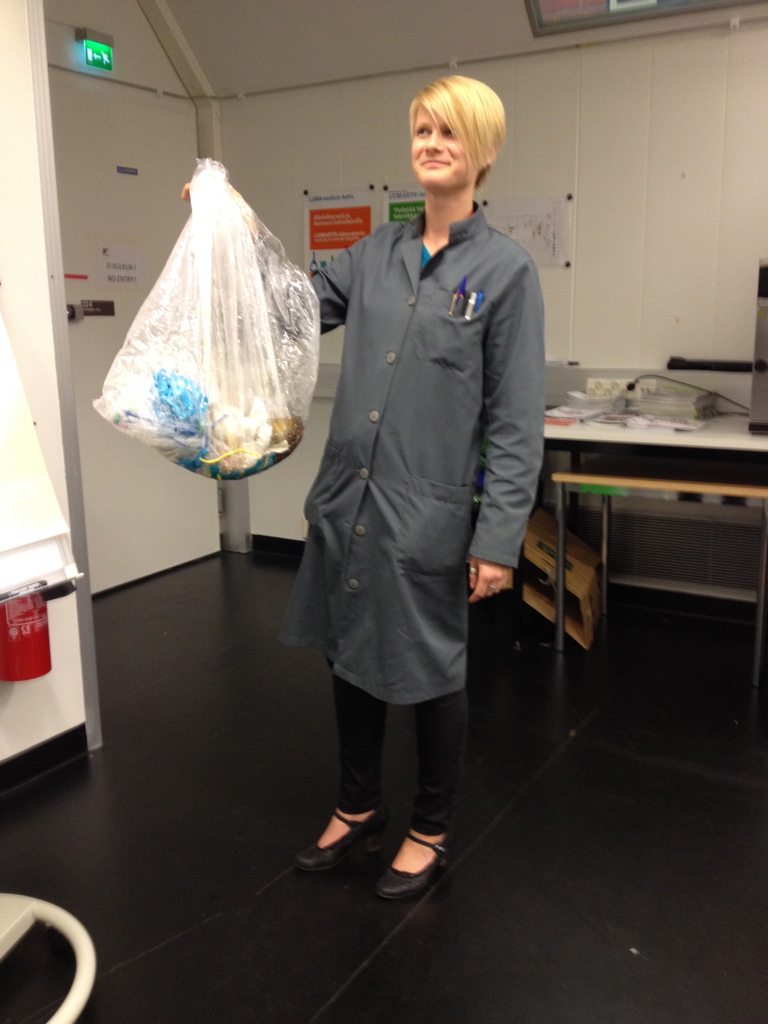 The last phase of the workshop (has it really been a workshop? or an event? a meeting? and encounter? a happening?) gives participants (contributors?) that wish of a chance to briefly present some ideas. This is what happened;

Thierry Bardini:
Thierry talked to us about viruses, both the organic (and the discourse on whether they are alive or not) and the digital (and those who make them).  And he introduced ideas of ‘Venter capitalism’, viral ideas, the blurring of the boundary between viruses and cellular parasites and symbionts. We heard that considering viruses as dead or alive has long been a matter of taste, but that current thinking leans towards them being alive. They are also now being considered as ‘essential agents’ within the roots and stem of the tree of life, and that their genetic volatility is an essential precondition for life. Finally he introduced us to the disconcerting ideas of hackers such as ‘Second Part to Hell’ who are moving into creating hybrid biological and digital viruses.
http://www.ctheory.net/articles.aspx?id=504

Helena Shomar:
Helena spoke of her interest in creating video games for science and education. She has been working with scientists, designers and programmers to create web based, open source, adventure games such as Hero.Coli in which players solve scientific problems. The game taps into the idea of citizen science, helping people to understand the science behind what they are doing. She made reference to several citizen science ‘games’ that are already out there such as Fold It, Eyewire and Phyla.
herocoli.com

Georg Tremmel:
Georg began by talking about his Common Flowers project in which he and his partner Shiho Fukuhara have reverse engineered a type of carnation that was already the result of genetic manipulation. A recent evolution of this project is White Out, in which they attempt to remove the gene that produces the blue colour and return them to their natural state. The key, and very interesting, question at the heart of these works is that if we genetically modify an organism to reverse or cancel the effects of genetic modification, is it still genetically modified? He went on to present his ideas about DNA as code and the notion of the Hello World program which led onto ultimate machines (whose only function is to turn themselves off) and the phenomena of the virtual Japanese superstar.
http://www.z33.be/en/artists/bcl-georg-tremmel-en-shiho-fukuhara

Pei-Ying Lin:
Pei introduced us to the Taiwanese BioArt Community which has been operating since 2010. The community has been running regular workshops and events on their own and in collaboration with international colleagues and associates such as Spela Petric, Lifepatch and Hackteria. Their workshops include techniques such as bacterial culture, plant tissue culture, DIY electrophoresis and more food related activities such as wine making and sticky tofu making. The food and kitchen aesthetic and methodology carries over into much of their workshop set-ups where easily available kitchen supplies and ingredients are transformed into temporary laboratories.
http://bioart.tw/

A brief interlude took place at this point as Marika proudly displayed the inert and lifeless bag of waste freshly emerged from the autoclave.

Sruli Recht:
Sruli presented to us a prepared discourse about product, interaction and fashion design. His focus is very much on narrative, the story behind the materials and how this meshes with our own dreams, aspirations and expectations. The narrative is key for him, and provides the way into the consumer’s subconscious. Design is a game of seduction and persuasion, and the more compelling the story, the more invested is the client. Emotional responses stimulated by a sense of the uncomfortable is a deep interest of his.
http://srulirecht.com/

Pia Lindman:
Pia told us about Koli National Park in the North Karelia region of Finland and discussed the idea of what is untouched nature. This landscape is important for Finnish culture and artists and painters have contributed to the construction of the Finnish romantic image. Her activities in this space have explored the idea of walking lectures, or the lecture as walking. More recently she was there with current Biofilia artist in residence and Making_Life participant Paul Vanouse making an experiment with PCR sauna. PCR is the process by which small DNA samples are amplified using a long and regular process of heating and cooling cycles. This experiment is probably a world first but unfortunately at the time of writing the results are not in.
http://www.koli.fi/In-English/Frontpage

Antti Tenetz:
Antti’s talk covered many of his projects in which he has collaborated with artists, scientists and local people, both internationally and in Finland. These projects included;
Cryolab from 2013, an installation that brings together bioart, ice sculpture and sound, in an investigation of delicate relationships in the Arctic ecosystem;
Gaze also from 2013, in which a feed from a camera in an exhibition space or the spectator’s mobile is altered with a custom application to mimic the way how an animal is seeing the visual world.
Body of Water also from 2013, a collaboration between Jaakko Mattila and Antti Tenetz – uses sensory feeds, living samples, environmental sensors, DIY microscopes and pre-recorded visuals from the artists´native Finland and across Europe to produce an interactive experience highlighting the connection between the individual, community and water as a vital life source.
http://www.tenetz.com/

Finally it was time to close the meeting/workshop/encounter/happening and look to the future. More specifically November 2014. We move away from the basics covered in this episode and look towards more complex ideas and practices around xeno- and exobiology. We also heard many state their desires to include more discourse on our roles and artists and scientists both as practitioners and collaborators. Above all was a call to make more time for the discussion of ethics in relation to what we are doing.