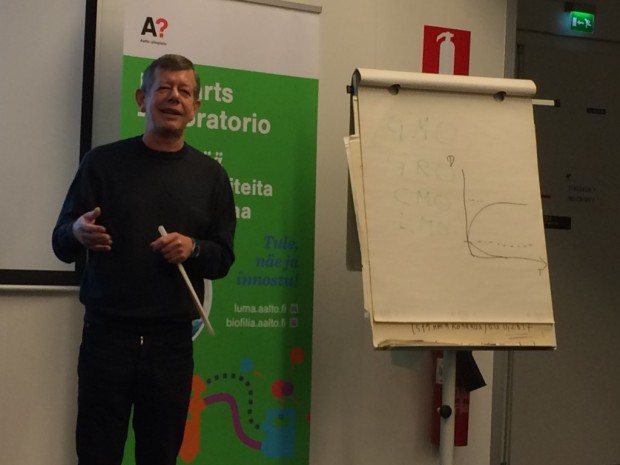 Panspermia or Not
posted by sarah on 23 March 2016

We Are The Only Chance

Important to note the operational definition of life: “The characteristic that distinguishes organisms from inorganic substances and dead objects” (Wikipedia), it doesn’t really say anything about life.  Referring to the article “Nothing makes sense in biology except in the light of evolution” by Theodosius Dobzhansky (1964) we discuss that the phenomena observed can only make sense under the framing of evolution, contrasting to the religious view.

Rupert’s lecture led us to discuss The Last Universal Common Ancestor, LUCA, which is our limiting factor, it is how the basis of all life and ‘unity’ is understandable as a consequence of common descent. Hacking biology can give a chance to other organisms and species that cannot survive without our intervention, we are their only chance. It could be said that natural selection blocks innovation.

Strategies he went through for creating artificial life forms including BioBricks, Moore’s law in DNA sequence analysis and chemical gene/genome synthesis, Synthetic Biology by trial and error?... but Nature knows “how to” – we call it evolution.

Adopting “Darwin’s Dampfmaschine” in which each generation the living organisms are just a way of gene amplification, scientists design the devices that go through directional evolution for the bacteria.

Rupert’s research involves continuous culture devices and is a combination of elements of the Chemostat (nutrient flow is constant) and Turbidostat (nutrient flow is conditional to cell density – selecting those who grow faster). Originally, they were designed for experimental evolutions. The real game is – who is the one who is left in the system in the end -> those that have not disappeared. The problem is continuous cultivation of cells in chemostats or turbidostats invariably selects for adhesive, static variants.

Is the system selected by growth?
In each case it can link to growth of the organisms

A new form of life?
Could it have been created in vitro?
How many mutations to get there?  About 10,000- 400 hundred generations.
Why hasn’t it happened in Nature?  May be it is and has – this is evolution.
Constraint propagation (“frozen accident”): Natural selection blocks innovations, problems in natural systems, there are too many wild types, one will never get the chance to recover from the lower status. How could it be done differently?

Xenobiology
Here we were discussing experimental evolution, with Rupert’s example of modifying bacteria with a thymine base with Cl adding chloride instead.
How can we make E. coli grow on chloride?  This experiment shows that it is possible to modify a bacteria to become something else.
But what happens later, after?  The lifespan of computers are short, can we read the data later, how will we read it in the future.