Augury: Machines which look at birds 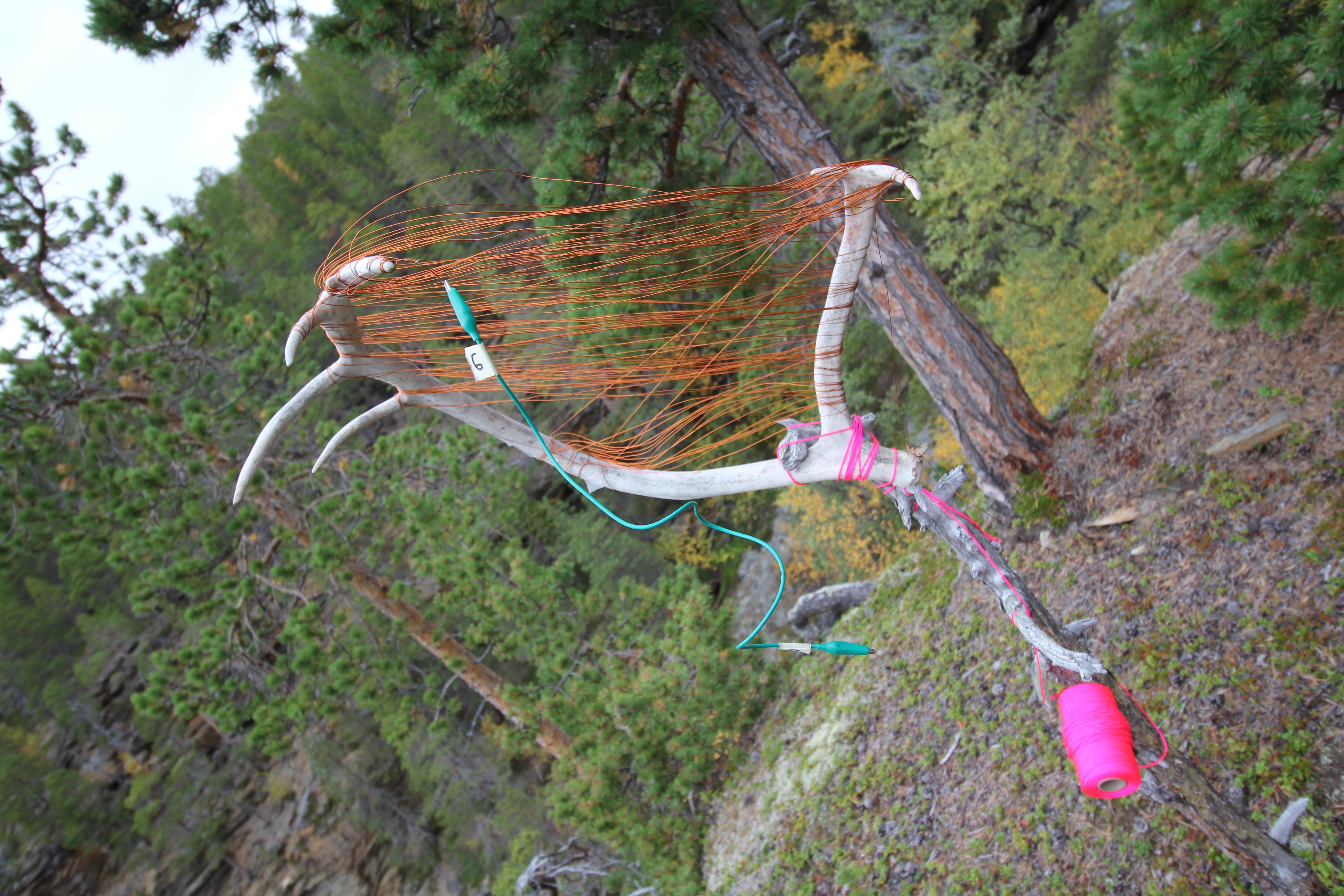 Sense and sensing are forms of divination, of prediction. Augury may be defined as the practice of interpreting omens from the observed flight or dance of non-humans, tracked by GPS or satellite; divining both the past and the future, not any present but sheer persistence which is beyond appearance, offering either transcendent meaning or only the earth.

Signals are opened to this earthy consciousness by all the sensitive, the epileptic, and the paranoid species. To foresee means to be inspired by vapours, by fumes and smoke from industrial chimneys and rotting snakes, burning forests, pure piercing notes and colours, by skin sensing heat while moisture evaporates from dew and sweat on the surface of plants or bodies, vibrations of the questing insect climbing slowly as the measured temperature gradient of earthworm execution falls. What is to be divined (by the group) in the unfaithful language of mosses, machines, mushrooms, birds and others are the various past and future depositions, intrusions, compressions, degradations, and gradings of lithic entropy, these deformations of energy.

The approaching future of lookahead executions and exploits, compiled memories of clues, announcements, intimations, this disappearing and quitting past is spectral and is always wanting divination in the field. This group will decode the living and material discards of sense.

Martin Howse (DEU) is occupied with an artistic, interdisciplinary investigation of the links between the earth, software and the human psyche. His research and work is concerned with a broad and practical questioning of the exact location of execution and of code within the world (psychogeophysics).
http://www.1010.co.uk/org/

Vanessa Lorenzo (CH) lives and works in Lausanne. Her practice is situated at the intersection of Media, Design and Biology. She creates fictional scenarios to contextualise the use of technology and DIY Biology through imagined objects; hybrid ecologies that usually embed the radical poetry of the more-than-human in order to affect the perception of our environment. She researches about the role of design to influence the social imaginary in order to seek for non-anthropocentric landscapes and alternative futures. Also, she nourishes (from) and believes (in) the «middle-ground» (communities of hackers / artists / citizens working in alternative spaces), that, from Vanessa’s point of view, has the power to subvert the dominating role of traditional science and technology spheres. Vanessa believes that this could lead to a more inclusive knowledge production.
www.hybridoa.org

Sam Nightingale (UK) is an artist and researcher, based in London, who investigates ‘spectral ecologies’. Working with photographic and time-based media, his practice seeks to make perceivable the human/non-human temporal entanglements that co-produce the material and environmental conditions of site.   Nightingale’s practice is research-based focusing on specific geophysical locations and their seemingly invisible histories. His work is concerned with making visible the haunting or co-presence of another time (legacies of deep geological time to industrialised capitalism) that are active and informing the material conditions of at the sites he works: from ancient salt lakes in the Australian desert to the atomic light of a nuclear power plant in the far north of Scotland, for example. Engaging with ideas from media archaeology, often working with practices and histories from early cinema and photography, Nightingale responds to these sites as‘spectral ecologies’ or ‘spectral landscapes’. He draws as much on ‘man-made’ media technologies as on the environment’s own material, expressive and creative qualities to produce an aesthetics of human and non-human entanglement and evolution.   The projects emerge out of a process of historical research, speculative fieldwork, philosophical questioning, conversations and collaboration with researchers, academics and other artists.  PhD Candidate at Goldsmiths, University of London (Media & Communication / Centre for Research Architecture).
https://www.samnightingale.com/

Saara Hannula (FIN) is an artist, researcher, and educator living and working in Helsinki. She studied architecture at Helsinki University of Technology, completed a master's degree in environmental art at Aalto University School of Arts, Design and Architecture in 2010 and is currently a doctoral candidate at the Performing Arts Research Center, Theatre Academy of the University of the Arts Helsinki.During the past two decades, she has initiated and coordinated a number of collaborative projects, such as The BodyBuilding Project (2007–2016), Utopian Reality (2012–2013), and Nonhuman Island(2016–2017), co-curated and organized events in various contexts and venues both in Finland and elsewhere, and organized and taught a variety of courses, workshops, and seminars at University of the Arts Helsinki and Aalto University.Her current practice consists of perennial artistic research processes that weave ecological and posthuman approaches into practices of performance- and event-making. The research processes, often revolving around the materiality, performativity, and futurity of post-natural and post-industrial environments, are shared through events, installations, workshops, and publications.
http://www.saarahannula.com/

Jukka Hautamäki (FIN) is a Helsinki-based media artist who works with sound, lens-based media, light and electronics. The artworks are often seen through multifaceted presentation platforms. Hautamäki is researching the layers of technology, media's materiality and perception. He is exploring the act of perceiving, in which a material transforms into another via use of sculptural elements and time-based media. The installations reflect on the construction and repetition of images. Hautamäki’s latest solo exhibitions have been presented at the Gallery Forum Box in 2018, Gallery Sculptor in 2016. Group exhibitions in Kunsthalle Helsinki, RIXC Festival in Riga, and HORSEANDPONY Fine Arts in Berlin. Hautamäki's sound performances are microscopic studies into electronic sound. His live setup consists of primitive DIY sound devices, which he manipulates in real time by reconnecting circuits. He is curious to study methods for creating sonic narration in relation to magic and hauntology.Hautamäki has performed live in Europe and North America. Performance venues include La-bas Biennale, Gallery Augusta at HIAP and AAVE festival in Helsinki, POM/EVA conference in Copenhagen, Ges21 in St. Petersburg, Avatar Centre in Quebec City, Music Hackspace in London, Madame Claude in Berlin, CT-SWaM at Fridman Gallery, Harvestworks and Trans-Pecos in New York. He has held numerous sound art live performances, lectures and workshops in Europe and in North America. Hautamäki is founder member and curator of KRUKS Art & Technology collective, recently co-curating Takeover group exhibition in Gallery Sculptor, Helsinki.
jukkahautamaki.com

Lisa Swanstrom (USA) is an Associate Professor of English at the University of Utah and was recently (summer 2018) a Visiting Scholar/Fellow in Norway at the University of Stavanger’s Greenhouse Project. She is also a Co-Editor of Science Fiction Studies and a Co-Editor of the electronic book review. Her research and teaching interests include science fiction, natural history, media theory, and the digital humanities. Her first book, Animal, Vegetable, Digital, won the Elizabeth Agee Prize for outstanding research in American Literature from the publisher (University of Alabama Press). Her current project considers the entwined cultural histories of computer code, field guides to nature, and environmental conservation. Before joining the English Department at the U, she was an Assistant Professor of English at Florida Atlantic University (2011-2016), a postdoctoral research fellow at Umeå University’s HUMlab in northern Sweden (2010), and the Florence Levy Kay Fellow in the Digital Humanities in the English Department at Brandeis University in Massachusetts (2008-2009). She earned her Ph.D. in Comparative Literature from the University of California, Santa Barbara.
http://www.swanstream.org/