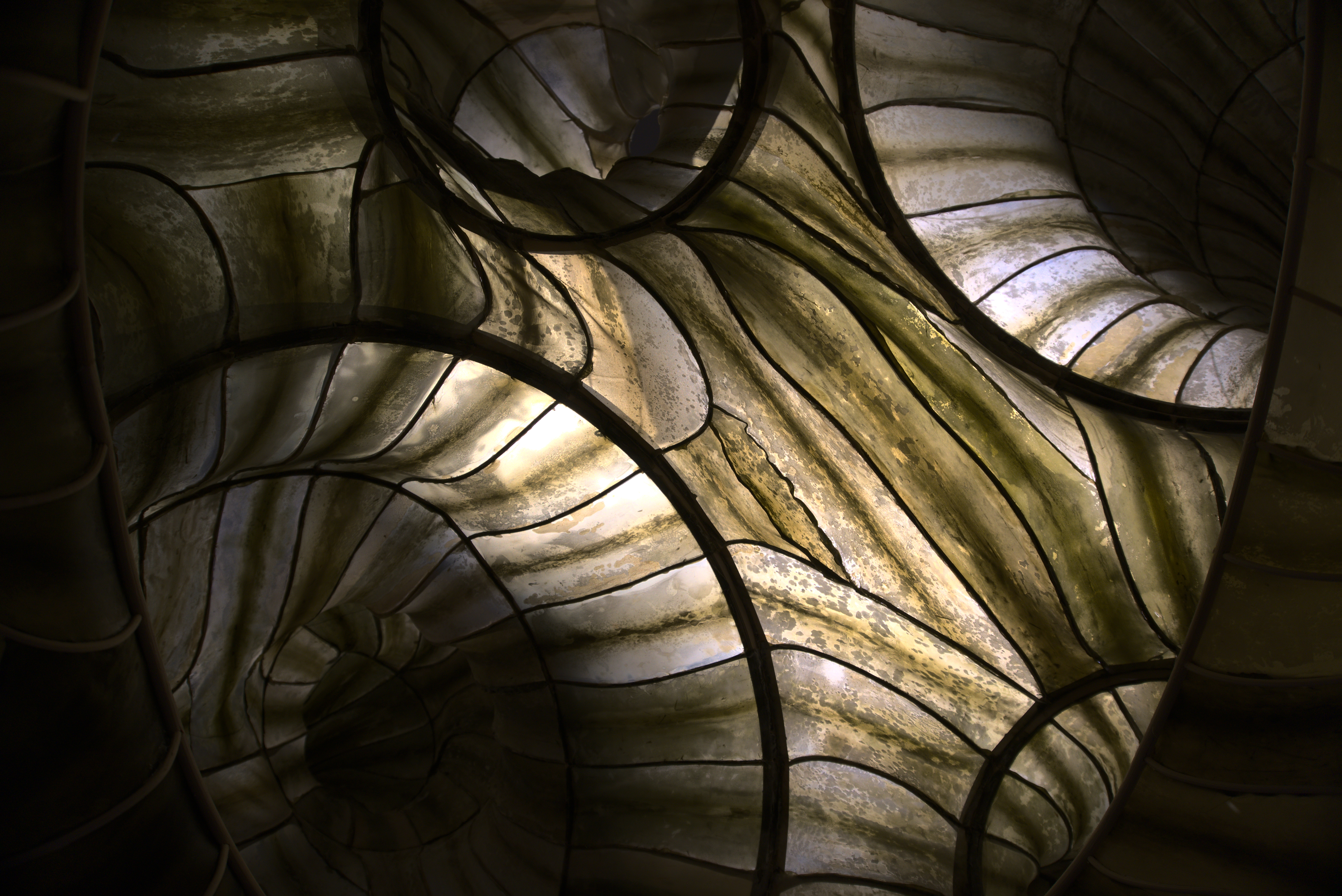 Created in collaboration with Annantalo Arts Centre, Criss-Crossing Ecologies was an art&science exhibition exploring that which cannot be perceived by the human senses. It featured works by six internationally acclaimed artists - Brandon Ballengée, Cecilia Jonsson, Julia Lohmann, Soichiro Mihara, Leena Saarinen, and Antti Tenetz - who explore their surroundings through the lenses of art, science, and design.

Due to the pandemic, the exhibition turned out much shorter than planned: it was on view at Annantalo’s main gallery space in Helsinki from August to November 2020. This page takes you through the exhibition with installation photos and texts introducing the artists and their works. 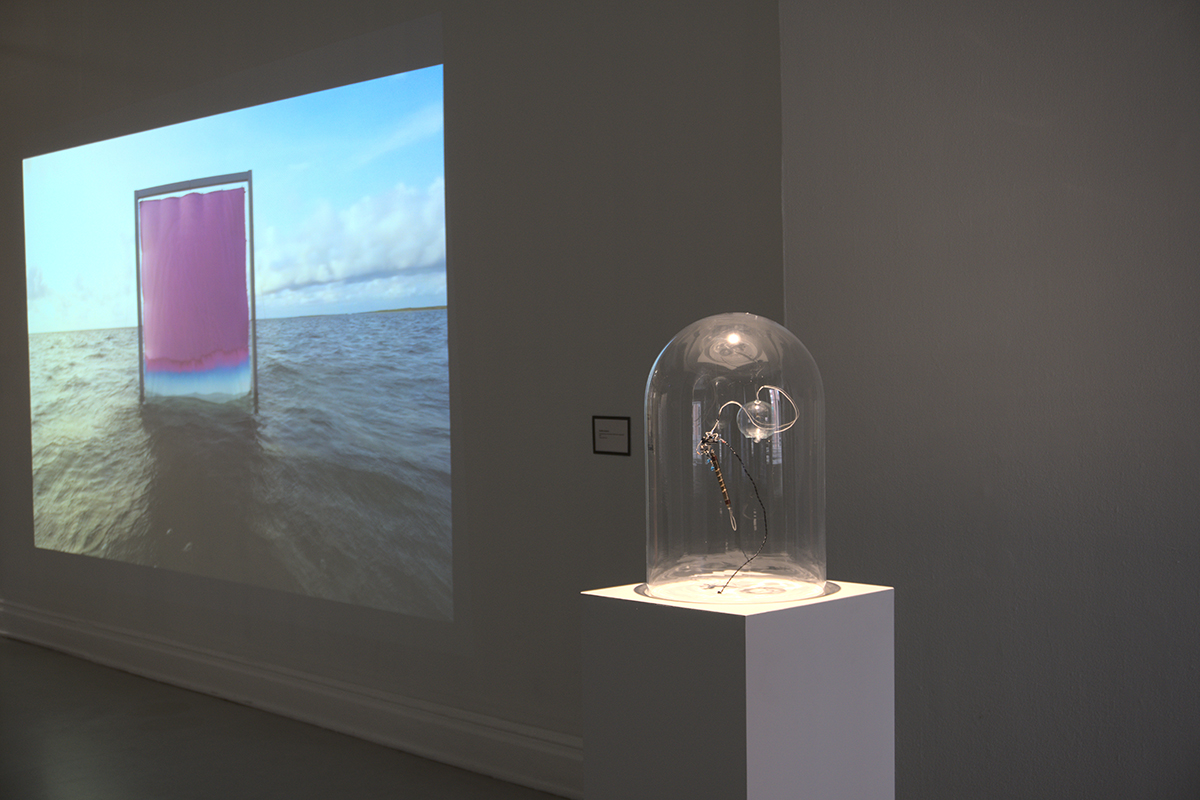 The material starting points of the exhibited works included seaweed, artificial intelligence in space, the sounds of birds, the acidity level of seawater, radioactivity or mutated frogs - and how they point to various natural and anthropogenic phenomena. The aestheticization of each research subject is a poetic quest leading to deeper questions: what is coexistence in different environments and what are the ways humans relate to the ecosystem they are part of? How can the changing world be perceived in these works? The transdisciplinary approach of the artists assists to bring these questions into light.

In her mixed media installation Tides (2017–), Cecilia Jonsson explores tidal dynamics and the elusive concept known as the 'mean sea level.' Two key variables in determining tide height are seabed topography and coastal topography, both of which humans have changed extensively. Searching for such an unstable average surface height has become urgently important due to global warming and rising sea levels. The tide represents not only an environmental and scientific challenge, but also a force, which has undeniable physical and psychological influence on our culture.

Jonsson positions vertical structures with stretched fabric, dyed with the natural pH indicator anthocyanin, in the intertidal zone to absorb a tidal cycle. As the fabric absorbs the rising water, the chemical reactions, which create the colors, are retained in the fabric. Tides is installed in selected sites on coasts, salt marshes, wetlands, lakes, rivers, and other locations under environmental stress or in proximity to human-made water control structures. The work aims to explore the science and history of the greatest force on earth and yield new insight of our own impact on this watery planet.

> Watch a Meet the Artist video with Jonsson on Annantalo's Facebook page. 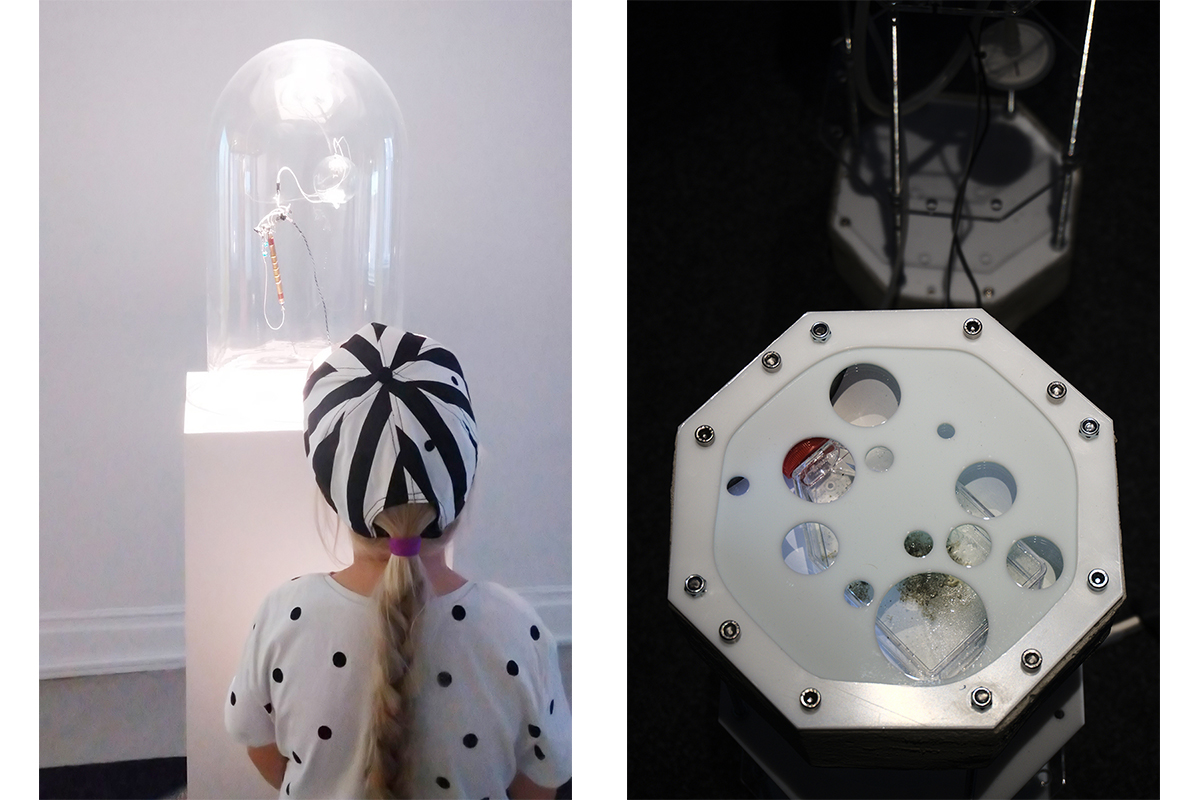 Image above, on the left: Soichiro Mihara's Bell. On the right: Antti Tenetz, Perihelion, 2019 (detail). Installation with videos, incubators and cyanobacteria of the species nostoc in the left chamber and nodularia in the right chamber.
-

Soichiro Mihara’s installation Bell (2013) revolves around a core element of energy that humans - in this age of increased technological progress - are unable to perceive. Every time a Geiger-Müller (GM) tube, which is part of an electronic circuit installed inside a glass dome, detects environmental radiation, it makes a glass bell in the same glass dome ring like a wind chime.

The work’s bell motif was inspired by the common Japanese belief that wind chimes function as tools that can catch and remove negative energy. By their very nature, phenomena beyond human perception arouse in us feelings of anxiety, and in order to overcome that sense of fear, we have come to transform them into perceivable objects.

> Watch a Meet the Artist video with Mihara on Annantalo's Facebook page. 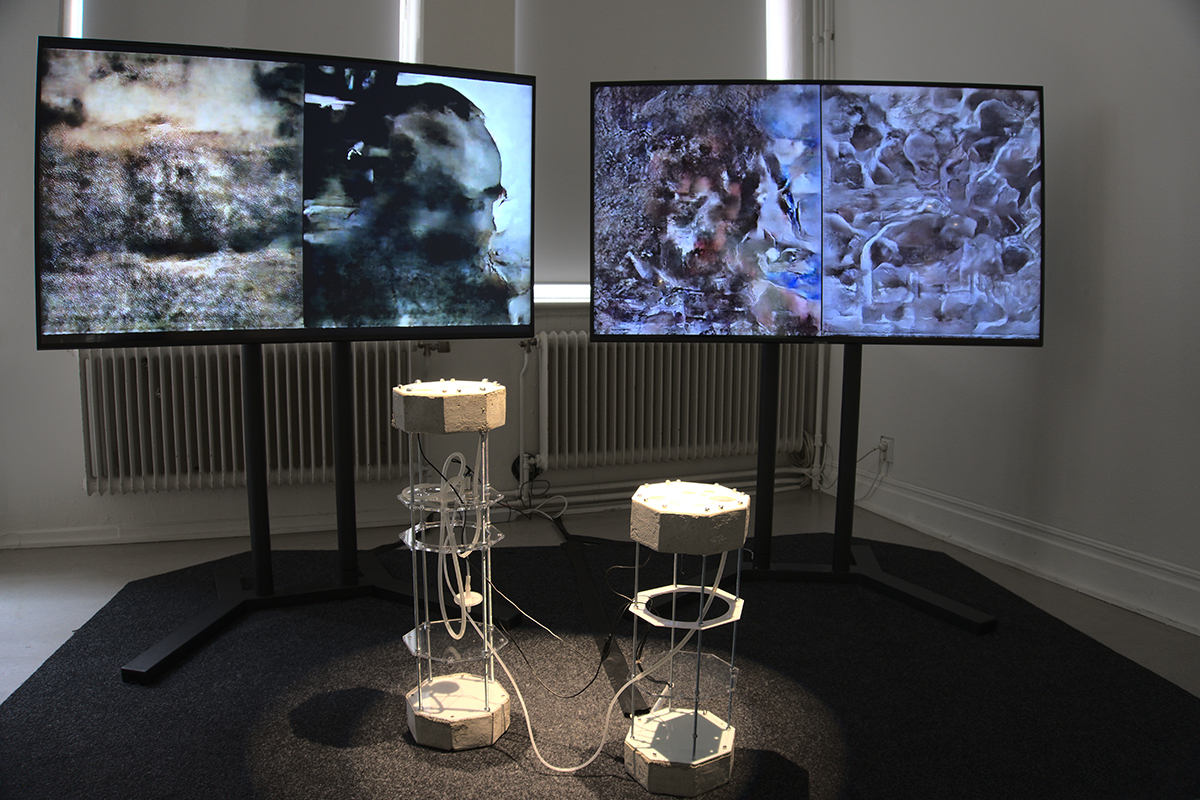 In his work Perihelion (2019), Antti Tenetz combines images of space, celestial bodies, technology, space science and life. Applying machine learning, the work brings out dreamlike images of the worlds and beings of possible futures in space. The Cyanobacteria, more commonly known as blue-green algae, which the artist selected for Perihelion, are the architects of life on Earth as we know it, because they enabled photosynthesis and produced atmospheric oxygen. Thus, maybe they could be also the architects for inhabiting space as they do in the installation.

GANs (generative adversarial network) are trained by Tenetz with images showing the bacteria, vegetation and their growth patterns as well as imagery containing asteroids, comets and humans. Perihelion is a speculative experiment about life in space. Together, images and bacteria produce hybrid dreamlike entities and visions located in a potential deep space and future. They give rise to a metamorphic world and beings in which the living and the technological merge with each other.

> Watch a Meet the Artist video with Tenetz on Annantalo's Facebook page. 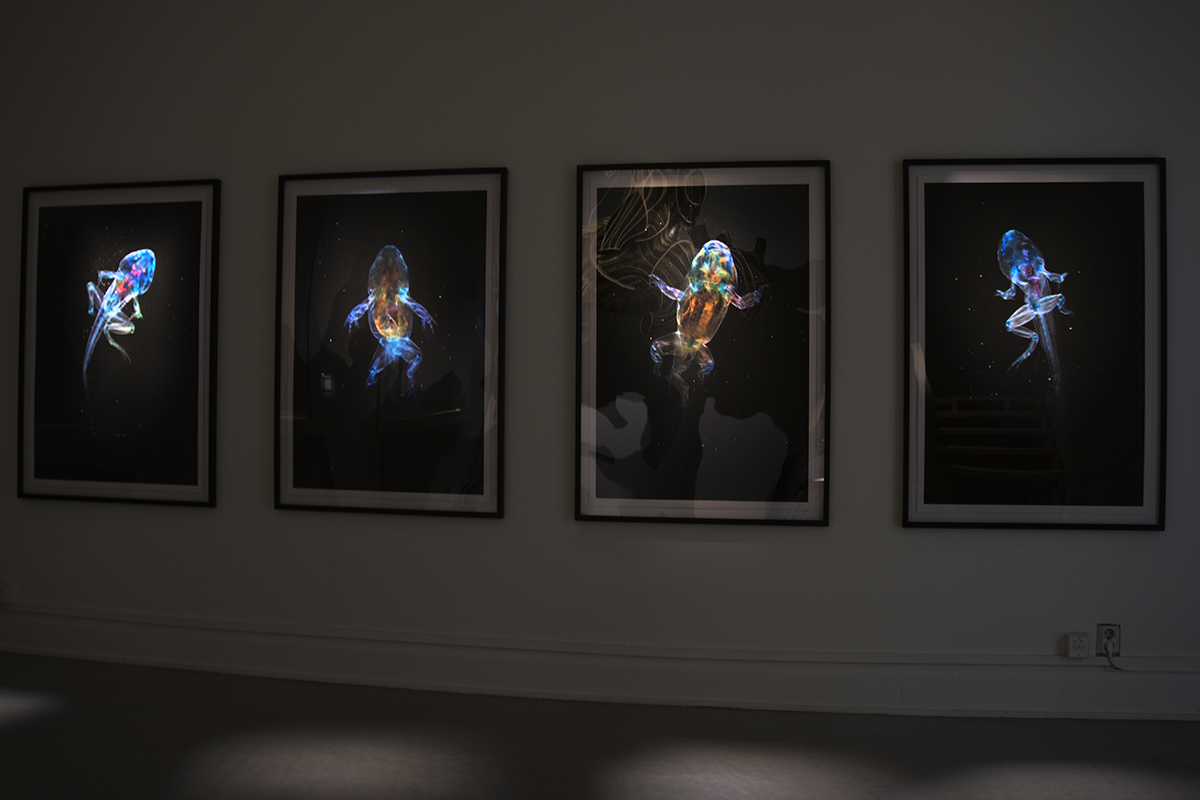 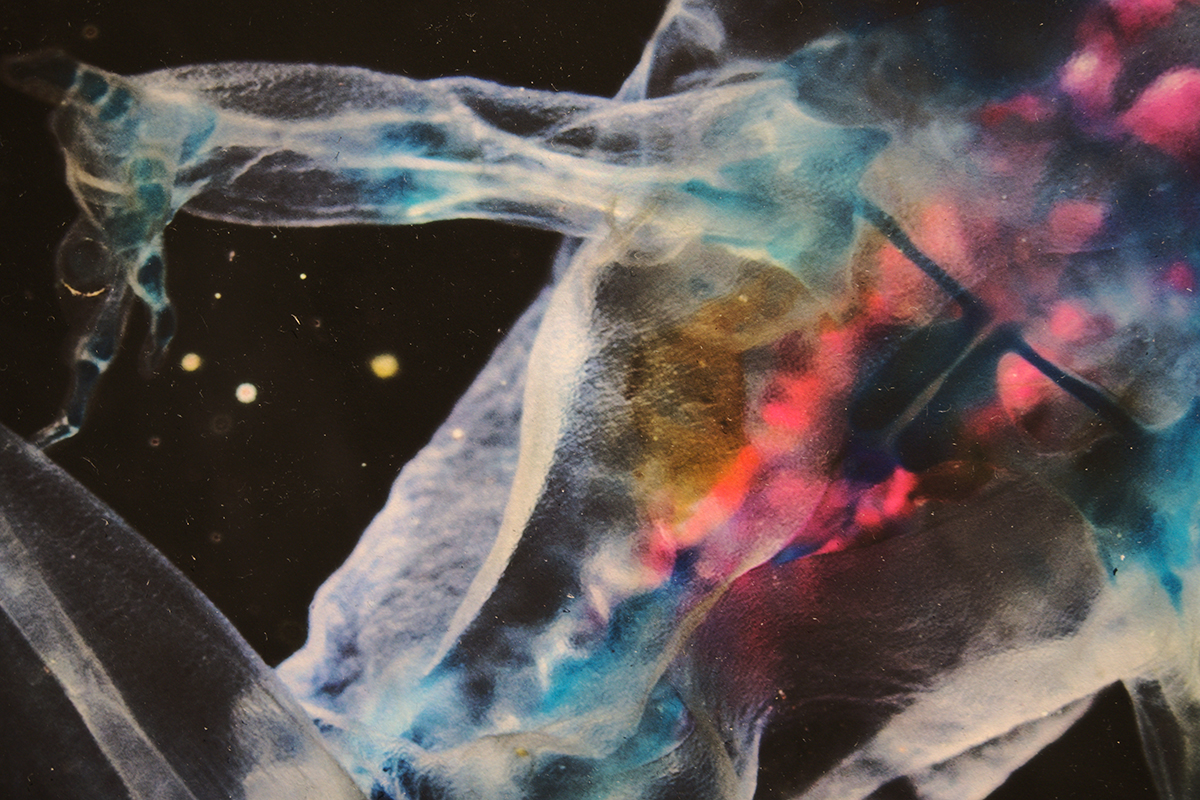 Brandon Ballengée has been working on the declining and abnormal development of amphibians as a way of visualising localised environmental degradation. Malamp Reliquaries are created by chemically 'clearing and staining' terminally deformed frogs found in nature. This process obscures direct representation, as the artist doesn’t want to exhibit large images of “monsters”, which would be frightening and exploitative to the organisms. The process is followed by high-resolution scanner photography of each specimen to create individual portraits. The portraits are printed as unique watercolor ink prints with each individual frog centered, appearing to “float” in what looks to be clouds or space. Their otherworldly quality is reinforced by the titles, named after ancient characters from Greco-Roman mythology.

The prints are scaled so that the frogs appear approximately the size of a human toddler. They attempt to invoke empathy in the viewer, instead of detachment or fear: if they are too small they will be overlooked, but if they are too large they will become monsters. Each finished artwork is unique and never editioned to recall the individual animal and to become a reliquary to a short-lived non-human life.

> Watch a Meet the Artist video with Ballengée on Annantalo's Facebook page. 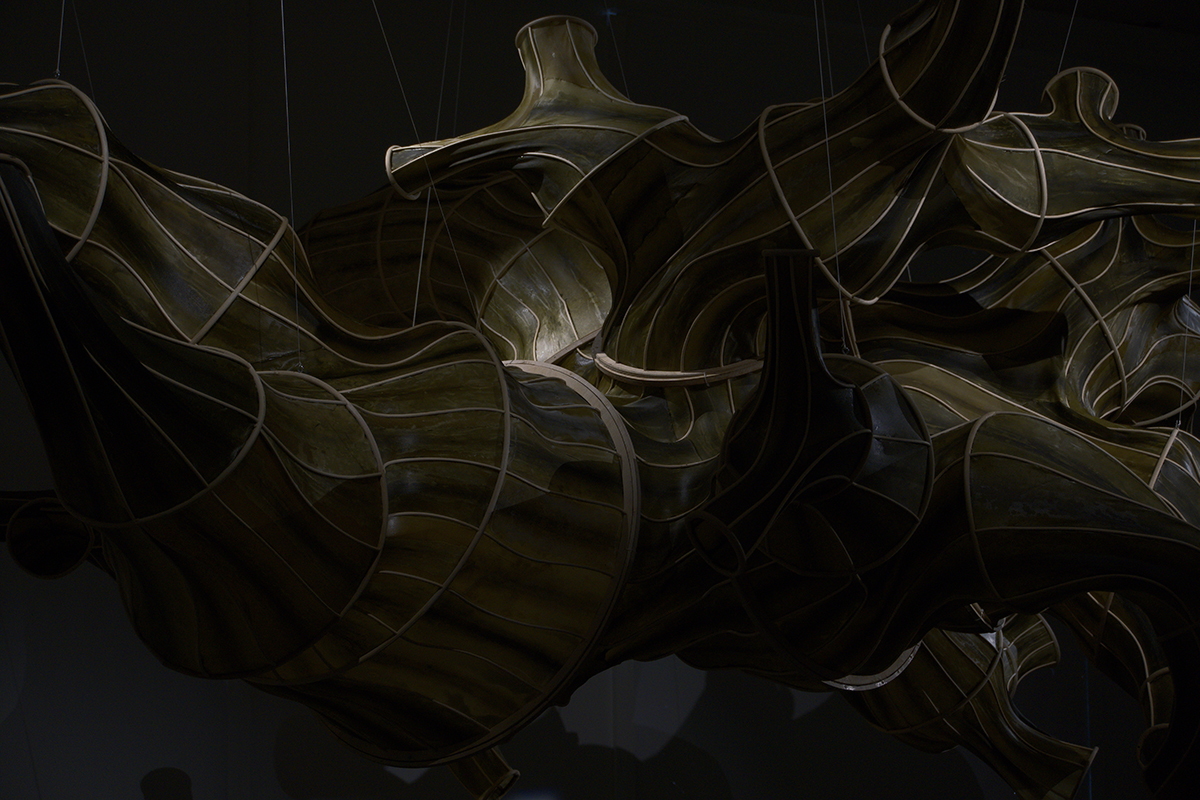 Julia Lohmann’s Kombu Ahtola is a dialogue with seaweed: a reflection on the material’s properties, its potential to rebalance damaged ecosystems and its future role as a material for making. Ahtola is the mythical underwater kingdom of water gods in Finnish folklore. Kelp is an ecosystem builder that supports underwater organisms big and small, and supplies us with oxygen. Perhaps, because of this, it can also give shelter to the deities of the ocean.

Seaweed can be grown and processed sustainably without the use of harmful chemicals, fertilizers or pesticides, and it can improve the ecosystem it is part of. Seaweed is also a superfood, has antibacterial properties, and can be used to make many different materials that have the potential to replace plastic, fabric or leather. The sustainable use of seaweed can help improve environments damaged by human influence.

In Kombu Ahtola, the seaweed is used as a skin on a rattan structure. Between each of the rattan, one single piece of seaweed is affixed. The drying seaweed pulls the shapes into convex forms and thereby forms, tightens and stabilises the entire skin on frame structure.

> Watch a Meet the Artist video with Lohmann on Annantalo's Facebook page. 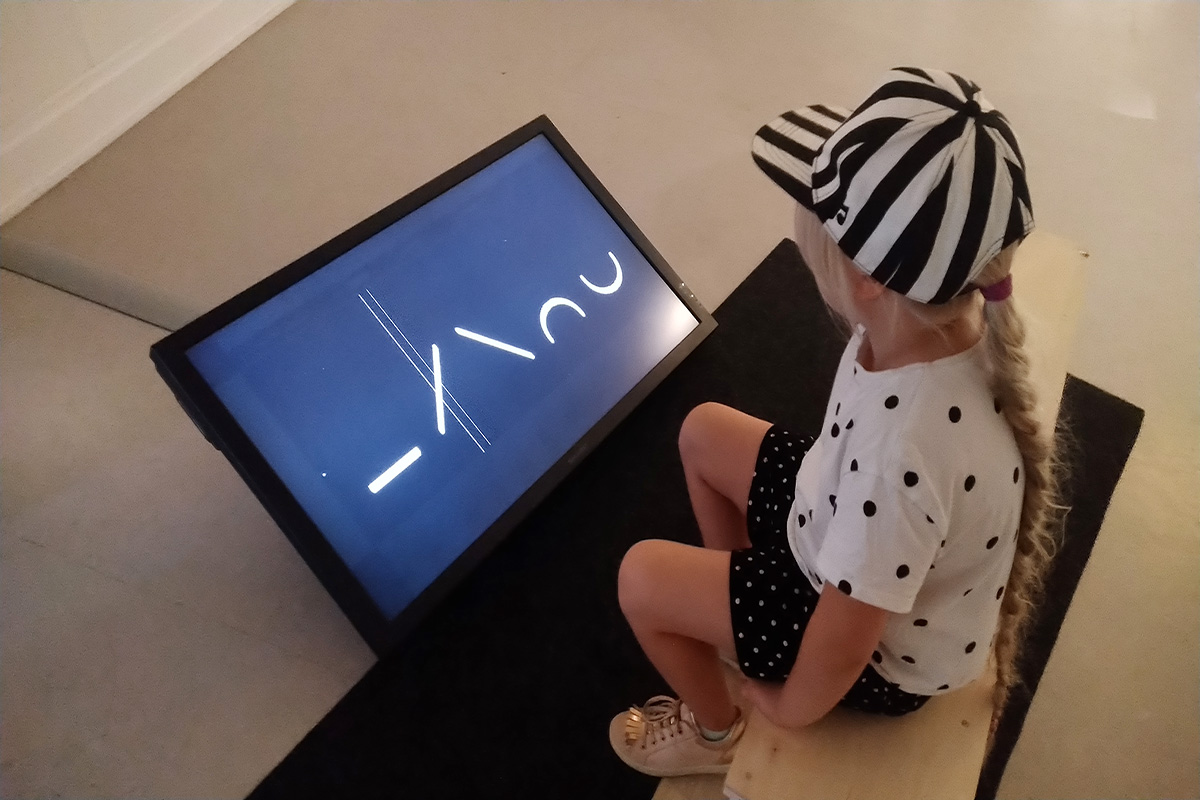 In her video work Birdsong (2019), Leena Saarinen studies human and non-human languages. Birdsong generates sound from bird song spectrograms and different kinds of alphabets. It tries to see their connections and similarities, so that it is able to tear down structures and hierarchies in the language.

Studying the bird song spectrograms, Saarinen found that the whistle tones in the spectrograms look visually similar to letters or part of an alphabet. That is one of the links she has been trying to make in order to bring the human and non-human languages closer to each other. Saarinen studied endangered alphabets and generated sounds from them. She is interested in different kinds of translations between image and sound; sound and text, as well as what knowledge can be gained and lost in the translation process.

> Watch a Meet the Artist video with Saarinen on Annantalo's Facebook page. 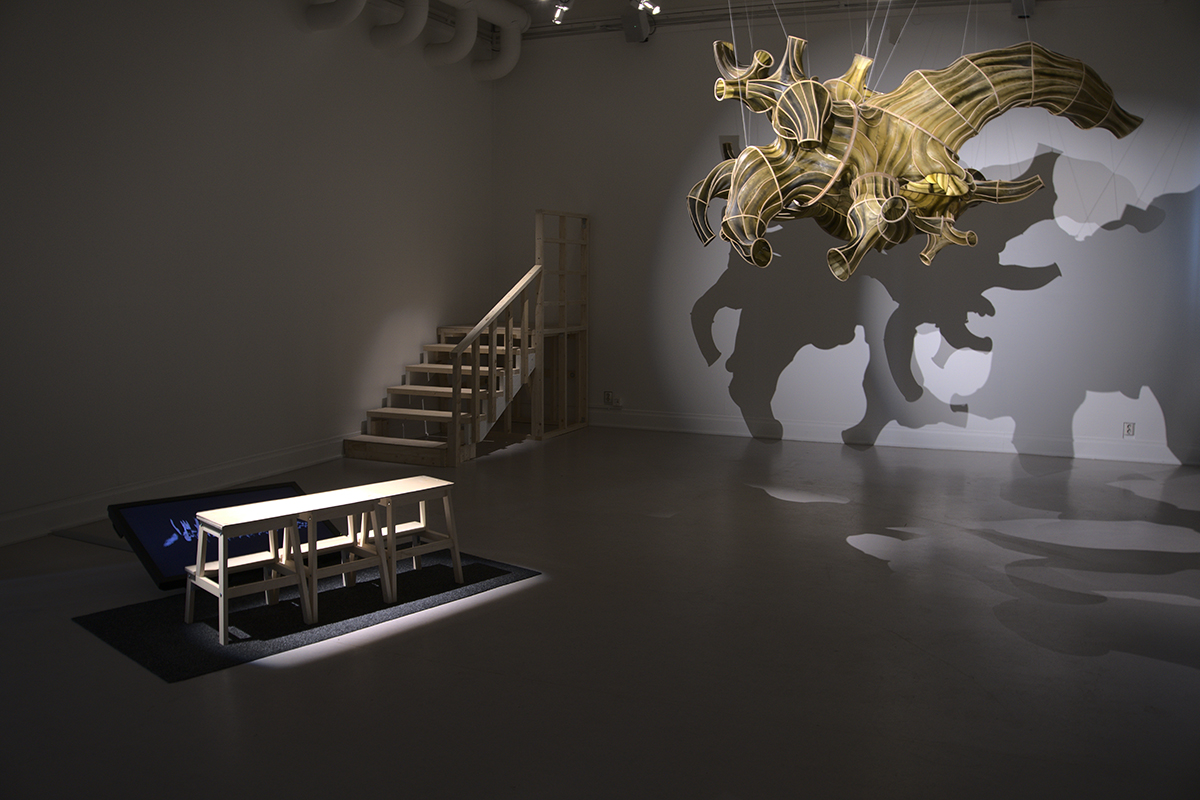 Image above, on the left: Leena Saarinen's Birdsong. On the right, Julia Lohmann's Kombu Ahtola.
-

Brandon Ballengée is a visual artist, biologist and environmental educator based in Louisiana, US. Ballengée creates transdisciplinary artworks inspired from his ecological field and laboratory research. Since 1996, a central focus of investigation has been the occurrence of developmental deformities and population declines among amphibians.
Currently, he is a Postdoctoral Researcher in the Biological Sciences Department at Louisiana State University (Baton Rouge, Louisiana), studying the impact on fishes from the 2010 Gulf of Mexico oil spill. Ballengée’s artwork has previously been exhibited throughout the USA and internationally in more than 20 countries.
https://brandonballengee.com/

Cecilia Jonsson is a multidisciplinary artist whose work explores links between scientific and cultural knowledge in order to understand the world and our relationship to it. In light of the ecological crisis, she explores constrained ideas of nature and how they form or are formed, and uses them as the medium for her work. Since receiving her MFA from the Bergen Academy of Art and the Nordic Sound Art program in 2012, Jonsson has exhibited widely in solo and group exhibitions throughout Europe, Asia and Australia. Her artistic work has received international mentions and awards.
https://www.ceciliajonsson.com/

German-born designer and researcher Julia Lohmann investigates and critiques the ethical and material value systems underpinning our relationship with flora and fauna. She is currently Professor of Contemporary Design at Aalto University, Finland. Julia studied at the Royal College of Art, where she has also taught and completed an AHRC-funded collaborative PhD scholarship between the RCA and the Victoria & Albert Museum. As designer in residence at the V&A in 2013, she founded the Department of Seaweed, a transdisciplinary group of artists, designers, scientists and sea-lovers, to collectively develop seaweed as a sustainable material for making. Lohmann’s work is part of major public and private collections worldwide and has received awards, bursaries and support from the Esmée Fairbairn Foundation, the British Council, Jerwood Contemporary Makers, D&AD, Stanley Picker Gallery, the Arts Foundation, Wellcome Trust and Cooper Hewitt Smithsonian Design Museum.
https://www.julialohmann.co.uk/

Aiming to make art that openly engages with the world, Soichiro Mihara creates systems that employ a wide range of materials, media, and technologies, such as acoustics, bubbles, radiation, rainbow, microbes, moss, air streams, soil and electrons in order to continually question the here and now. Since 2011, after an earthquake and tsunami struck the East coast of Japan, he has been working on ‘blanks project,’ which explores the boundaries of the systems that drive modern society. Since 2013, he has participated in different residency programs  such as the polar region (ArsBioarctica), rain forest (Labverde) and  DMZ (REAL DMZ PROJECT). Mihara’s work has been awarded multiple times and he has exhibited in many international solo and group exhibitions.
https://mhrs.pb.studio/

Leena Saarinen is a visual artist. She researches the relationship between humans and other species, looking for less human centered points-of-view in the age of climate change and mass extinctions. She is interested in culture, language and how other species are portrayed in cinema and literature, through nature description. Removing humans and human-made things from movies or texts, works as a metaphor of how humans are invading and destroying the habitats of other species. In Saarinen’s opinion, there is not very much left after the humans are taken out of the picture.
https://www.leenasaarinen.com/

Antti Tenetz is a visual artist. His works are situated at the interface between media arts, biological arts and urban art. Tenetz focuses on multi-disciplinary and multi-artistic cooperation between art and science. He often uses technologies such as drones, satellite tracking, game engines and machine learning. His works and cooperation projects have been exhibited in Finland and internationally. He has also won three national snow-sculpting competitions. Tenetz is a Regional Artist in bioart.

Perihelion is created in collaboration with Biofilia - Base for Biological Arts at Aalto University, Cyanobacteria research group in Department of Microbiology in the Faculty of Agriculture and Forestry at Helsinki University, Biocenter in Oulu University, University of Adelaide, Waag Planet B, International Lunar Exploration Working Group and technical assistance with machine learning Hannu Töyrylä.
http://www.tenetz.com/