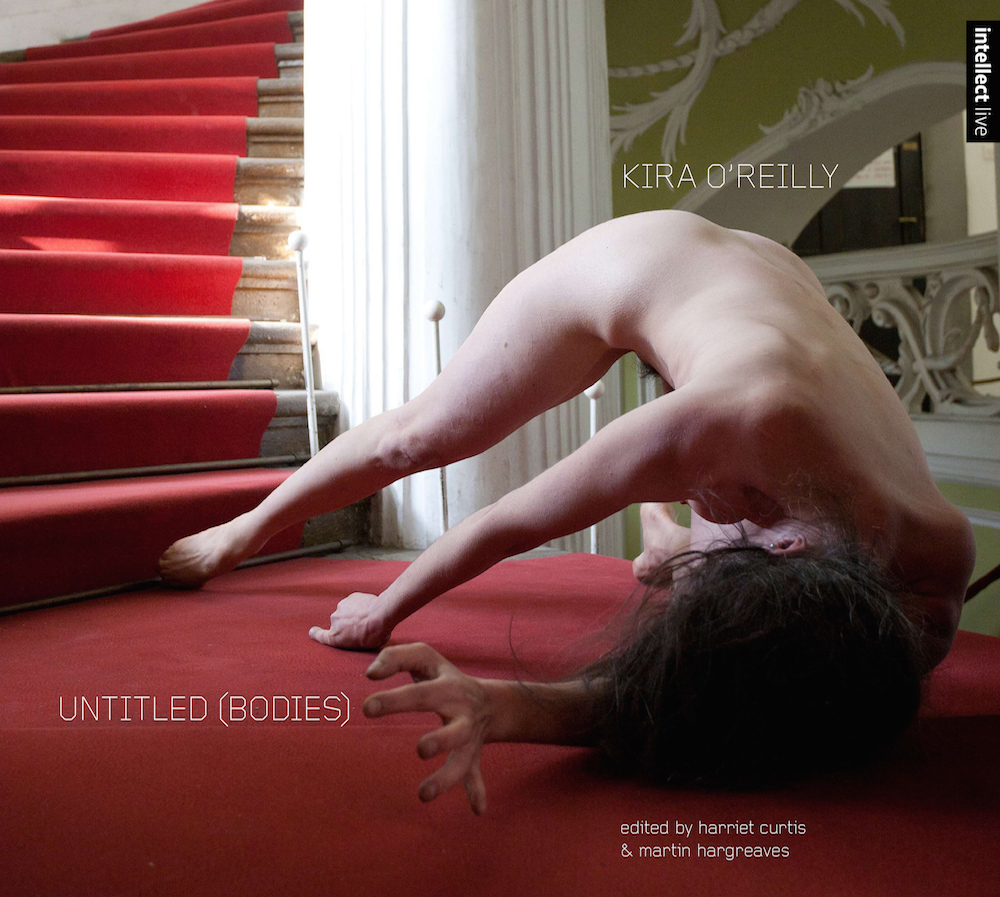 Come and join us for the launch of the publication Kira O’Reilly: Untitled (Bodies) edited by HarrietCurtis & Martin Hargreaves, and published by Live Art Development Agency and Intellect Books this autumn.

UPDATE: The publication will be available for sale during the launch for the special price of EURO 20 - please bring cash !

Bringing together newly commissioned and other writings by major thinkers in and beyond visual and performance studies, and extensive documentation of the artist’s work from two decades of practice, the book navigates through and between performance, biotechnical practices, image-making, and writing.

At book launch event in Helsinki Harriet Curtis’ introduction to the book will be followed by a round table discussion between Kira O’Reilly and invited participants Melisa Grant, Essi Kausalainen and Mari Keski-Korsu. They will explore and expand on some of the threads and themes of Kira’s works whilst referring to their own transdisciplinary practices. More information on the publication

Kira O’Reilly is an artist currently based in Helsinki where she leads a pilot masters programme in in Ecology and Contemporary Performance at the Theatre Academy, University of the Arts Helsinki. Her practice, both willfully interdisciplinary and entirely undisciplined, stems from a visual art background; it employs performance, drawing, makings, biotechnical practices and writing with which to consider speculative reconfigurations around The Body. But she is no longer sure if she even does that anymore.
She writes, teaches, mentors and collaborates with humans of various kinds, technologies and non- humans of numerous divergences including mosses, spiders, the sun, pigs, cell cultures, horses, micro-organisms, bicycles, rivers, landscapes, tundras, rocks, trees, shoes, food, books, air, lichen, green glitter, moon and ravens. Since graduating from the University of Wales Institute Cardiff in 1998 her work has been exhibited widely throughout the UK, Europe, Australia, China and Mexico. She has presented at conferences and symposia on both live art and science, art and technology interfaces. She has been a visiting lecturer in the UK, Australia and U.S.A in visual art, drama and dance.

Harriet Curtis is a researcher who writes on performance and visual art practices, and is a teaching fellow in Performance Studies and Liberal Arts at King’s College London. She has written on topics including feminist and activist performance practices, exhibitions and performance in Los Angeles, and performance archives. She has worked with the Live Art Development Agency in a number of capacities since 2011, including as research and editorial assistant for several editions in the Intellect Live series, including as co-editor (with Lois Keidan and Aaron Wright) of The Live Art Almanac Volume 4 (2016).

Melissa Grant trained as a biochemist and now works as a Senior Lecturer in Biological Sciences in the School of Dentistry, University of Birmingham, UK. Her research focusses on the discovery of molecules associated with inflammation, principally in the mouth, and the development of these into tests for disease prediction and progress; the function of white blood cells, predominantly neutrophils; and the effect of nutrition on the body. She has worked with humans, pets and zoo animals. She has been fascinated by interdisciplinary work and particularly the interplay between art and science over the last decade. She regularly hosts artists in her laboratory and participates in residential art science collaborations. She has recently established Open Wide, an art-science engagement space within the Birmingham Dental Hospital, to engage visitors to the hospital with outstanding research through partnerships and residencies with exceptional artists.

Essi Kausalainen explores currently inter-species communication: the complex interaction between humans, plants, animals and minerals. These dialogues are approached through her performance-based practice that, instead of objects or images, operates on actions, gestures, situations and processes. Focusing on the (dangerous) intimacy of the organic and inorganic bodies - the leaking, the digesting, the resonant - the work grows into systems that take the likeness of a mycorrhiza, the symbiotic body of plant and fungi, and thus resists traditional narratives. By building inter-species companionships and by approaching objects and spaces as co-performers Kausalainen aims to escape the hierarchical and linear ways of thinking and operating. Kausalainen (based in Helsinki) has taken part in numerous international performance festivals as well as presented her work in exhibitions, recently for example at Somerset House in London, Uppsala Arts museum, Moderna Museet Malmö, Frankfurter Kunstverein, Nikolaj Kunsthal Copenhagen, and
SAVVY Contemporary Berlin.

Mari Keski-Korsu (mkk) is a transdisciplinary artist. She explores how ecological and socio-economical changes manifest in everyday life. The work is based on collaborations with different kinds of communities, individuals and species. Her current practice is focused on inter-species communication and creating emphatic environments to enable empathy towards whole ecosystems. She is interested in relations in between art, activism, politics and science from permaculturic and ecofeminist perspectives. The practice can be for example interventions, documentary, performance, virtual worlds and installations. The works has been exhibited in Europe and in several other countries around the world. She collaborates with artist groups, researchers as well as organises and curates different types of projects. She is one of the artists of ‘Frontiers in Retreat‘, a 5-year international collaboration project constructed around artist residencies. She holds a MA from University of Arts and Design Helsinki (Medialab) and BA in visual arts from Polytechnic of Western Lapland. In 2016, she co-directed Pixelache Festival 2016 – ‘Interfaces for Empathy’.