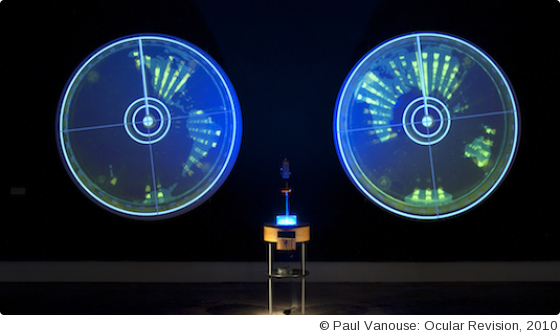 Vanouse, Professor of Visual Studies at the University at Buffalo, NY, presented works from over two decades of experience working with emerging media forms, which have been exhibited in over 20 countries and across the United States. In Helsinki, where he was hosted by HIAP, Vanouse has been working on a new project involving the human epidermal micro-biome, specifically those bacteria that process sweat at Biofilia in Aalto University. Interdisciplinarity and impassioned amateurism guide his art practice. For the past decade, Vanouse has been specifically concerned with forcing the arcane codes of scientific communication into a broader cultural language. His recent projects use molecular biology techniques to challenge “genome-hype” and to confront issues surrounding DNA fingerprinting.

#Field_Notes-CultivatingGrounds
Field_Notes Publication
“Field_Notes – From Landscape to Laboratory – Maisemasta Laboratorioon” Edited by Laura Beloff, Erich Berger and Terike Haapoja This publication is...
Book launch “Kira O’Reilly: Untitled (Bodies)” DRAFT
Kira O’Reilly: Untitled (Bodies) edited by HarrietCurtis & Martin Hargreaves brings together newly commissioned and other writings by major...
Artist presentation Marta de Menezes DRAFT
Marta de Menezes is a Portuguese artist (b. Lisbon, 1975) with a degree in Fine Arts by the University in Lisbon, and a MSt in History of Art and...
Book presentation “Britt Wray: Rise of the Necrofauna” DRAFT
In Rise of the Necrofauna, Britt Wray takes us deep into the minds and labs of some of the world’s most progressive thinkers to fnd out. After an...
State price for Interdisciplinary art DRAFT
The Bioartsociety was awarded the state prize for multidisciplinary art by the Arts Promotion Centre Finland. We want to warmly thank all of our...
#SOLU
Listening to Atmospheric Encounters - An evening on high altitudes
OnNovember, 2nd from 19hto 20h30, HAB artistsNoora SandgrenandTill Bovermannwarmly welcome you to an evening of soundscapes and discussions in...
#SOLU
TUO TUO screening
Our friends from TUO TUO are welcoming you to the screening dreaming of laho paratiisi: return of (the) earth, rhizomes laaaaaaugh, spiralling at...