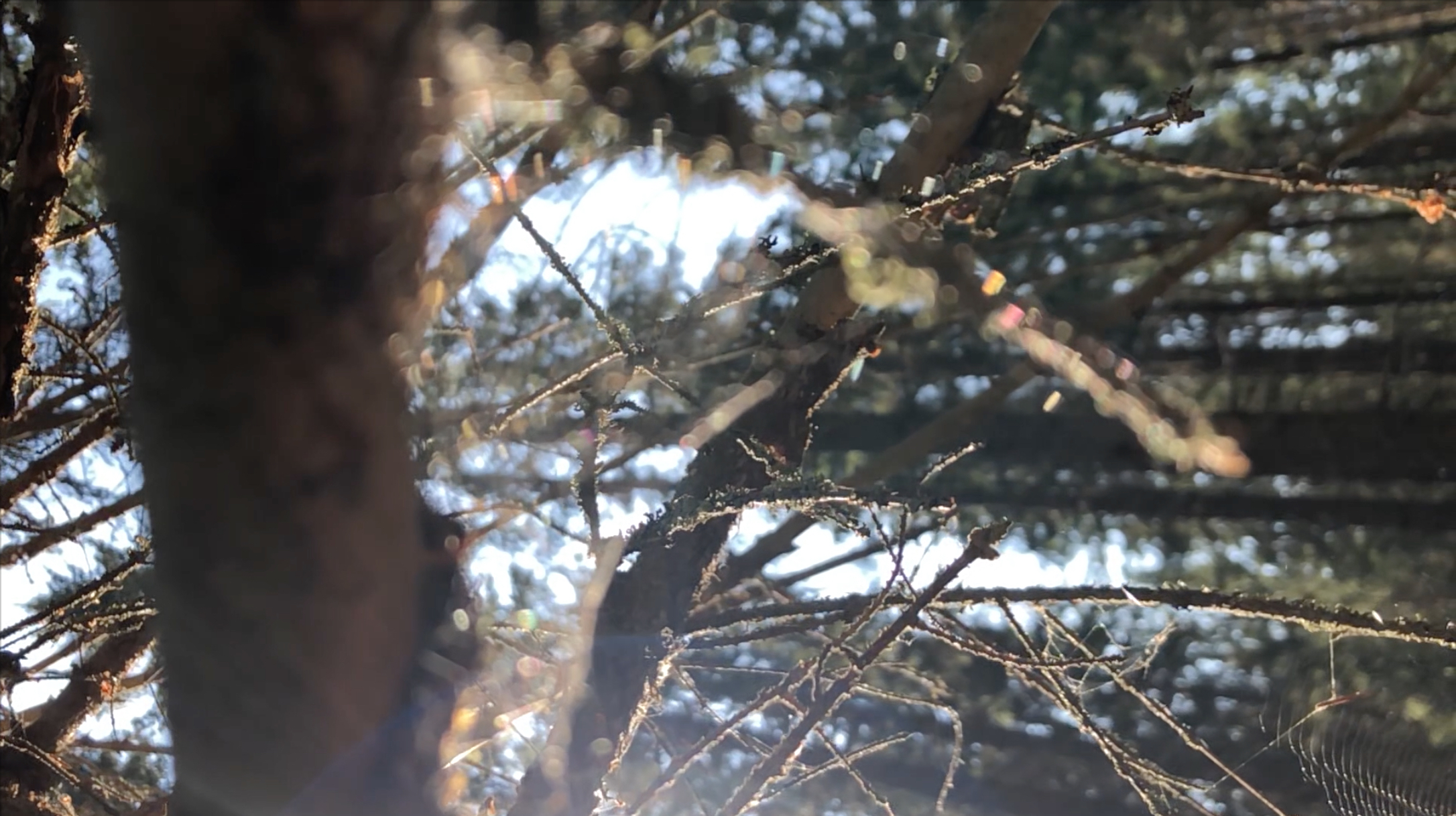 Our friends from TUO TUO are welcoming you to the screening dreaming of laho paratiisi: return of (the) earth, rhizomes laaaaaaugh, spiralling at SOLU Space. The event will begin at 18:30 in SOLU with some drinks and a brief introduction followed by the screening.

dreaming of laho paratiisiis is an audio-visual collaboration by artist and graphic designer Roby Redgrave McPherson & TUO TUO Cofounder and music artist Joni Judén aka Sisilisko. dreaming of laho paratiisi is a curatorial project in three parts: publication, site-specific artwork made of organic materials, and audio-visual film. The film is a poetic triptych featuring three shorts that connect the project’s conceptual themes with elements of the artwork and installation site, which were observed and recorded over the course of 48 hours, alongside a chorus of nonhuman counterparts. The artwork was designed and built by Aleksi Vesaluoma and Tania Malréchauffé of Cararcara Collective. Its construction took place over a 22-day period at TUO TUO in June 2021 and was later disassembled and scattered over nearby garden beds and compost heaps in August 2021. The score, created by Joni Judén aka Sisilisko, is composed of sounds recorded during a collective listening session and ceremony held near the artwork and in the surrounding forest at TUO TUO.

Copies of the dreaming of laho paratiisi publication will be available for free to attendees. The discussion will be in English.

This project was supported by Central Arts Promotion Finland.

Roby Redgrave McPherson is a Helsinki-based artist, graphic designer and queer symbiote working in both institutional and grassroots sectors. They currently work as the art director of Tidskriften Astra, as a teacher/organizer/facilitator and with the Helsinki-based platforms Effort and Trojan Horse. robynn.xyz

Caracara Collective is an experimental design studio that creates art and design installations and collections using biowaste. We promote a new wave of sustainable Nordic design, envisioning a future without harmful materials and where waste is a resource. Caracara Collective is named after a bird, which is native to Central and South America. Like many birds, caracaras collect natural matter and create their nests from it. This reflects our vision of recycling and making use of what is available. Also, caracara is a type of orange whose peel is one of our key ingredients. caracaracollective.com

TUO TUO is an artist-led project space and residency concentrating on the ecological arts in Joutsa, Finland. Established January 2020, TUO TUO negotiates the point of convergence across sound, visual art, performance and the environmental arts and sciences. TUO TUO’s mission is to function as fertile ground for ideas and to nurture close cooperation between artists, thinkers, researchers and other cultural actors through transdisciplinary programs and residencies. In seeking the balance between pancultural pluralism and local consciousness/ knowhow, TUO TUO is committed to integrating with the social and cultural life of Joutsa and the rest of Finland, while maintaining a strong international focus.
TUO (Finnish, nominative, eng. ‘the Other’) TUO (Finnish, third-person verb, eng. “brings”). The name TUO TUO speaks of our commitment to praxis and the progressive, pluralistic values at the heart of our operations.  Our response to the growing emergencies facing our planet is not to turn away from culture, but to become all the more demanding of it. We see the keys to progress through participation, experience and openness. The environments we create for ourselves shape the kind of humans we might become. tuotuoarts.com

#Field_Notes-CultivatingGrounds
Field_Notes Publication
“Field_Notes – From Landscape to Laboratory – Maisemasta Laboratorioon” Edited by Laura Beloff, Erich Berger and Terike Haapoja This publication is...
Artist Presentation Paul Vanouse
Vanouse, Professor of Visual Studies at the University at Buffalo, NY, presented works from over two decades of experience working with emerging...
Book launch “Kira O’Reilly: Untitled (Bodies)” DRAFT
Kira O’Reilly: Untitled (Bodies) edited by HarrietCurtis & Martin Hargreaves brings together newly commissioned and other writings by major...
Artist presentation Marta de Menezes DRAFT
Marta de Menezes is a Portuguese artist (b. Lisbon, 1975) with a degree in Fine Arts by the University in Lisbon, and a MSt in History of Art and...
Book presentation “Britt Wray: Rise of the Necrofauna” DRAFT
In Rise of the Necrofauna, Britt Wray takes us deep into the minds and labs of some of the world’s most progressive thinkers to fnd out. After an...
State price for Interdisciplinary art DRAFT
The Bioartsociety was awarded the state prize for multidisciplinary art by the Arts Promotion Centre Finland. We want to warmly thank all of our...
#SOLUexhibitions
Listening to Atmospheric Encounters - An evening on high altitudes
OnNovember, 2nd from 19hto 20h30, HAB artistsNoora SandgrenandTill Bovermannwarmly welcome you to an evening of soundscapes and discussions in...